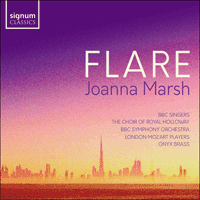 Joanna Marsh was described in The Guardian (2019) as one of today's leading composers for voice. This new album showcases a diverse collection of works inspired by her life and travels, from the cantata Pearl of Freedom—a musical dramatization of a pivotal moment in the fight for women's suffrage—to The tower, the composer's reaction to watching the building of the Burj Khalifa in Dubai.

Pearl of Freedom
The cantata Pearl of Freedom is a musical record of the events immediately leading up to the Derby of 1913, the incident of the collision between Emily Davison and the King’s horse Anmer, and its aftermath. The work opens with words that Emily Davison wrote in her diary about her passion for women’s suffrage. She uses the expression ‘Pearl of Freedom’ to refer to the ultimate prize of votes for women.

The text of the work, created by David Pountney is drawn from from original sources. It juxtaposes factual elements from the day; the horses names, the riders, their numbers, their colours, with Emily Davison’s state of mind. She is described in language that reflects the description of the horses and her musical material is heard in parallel with theirs. The music moves apace carrying Pountney’s race commentary into the drama of the crash between Emily and the horse, where they both perilously tumble and fall.

David Pountney invented the race commentary in the style of Peter Bromley. No such live commentaries existed at this period, but it accurately reflects the passage of the race up to Tattenham Corner where Ms Davison 'intervened'.

A number of contemporary voices give their immediate response to the accident; the press of the day, King George V and Queen Mary, via a diary entry later discovered. They speak of the crash’s immediate impact as a being serious but also an extreme nuisance to everyone involved. But included here is a list of the recovered contents from Emily’s handbag by the police sergeant on duty Sergeant Bunn. This allows a more intimate exploration of her intentions and leads us seamlessly into a reaffirmation of musical material at the opening of the work. A jagged rising line of unison strings echoes the intensity and also instability of Emily Davison’s state of mind as she prepared for that day.

The final episode of the piece is devoted to Emily’s funeral which was a very large scale public affair with 50,000 people in attendance. The music of this section takes the form of a funeral march based around one of the hymns that was sung on the day 'Nearer my God to thee' with echoing quotes from Chopin 'Funeral March' which was played throughout the procession.

Arabesques
A commission for The King’s Singers, Arabesques are settings of four short but highly evocative poems by contemporary male Arab poets. Each tells the story of a woman they have known and each is at a different stage of life. ‘A woman’, recalls a passionate encounter, ‘You want’, muses on a woman’s acquisitiveness, ‘Fading’, observes her gradual aging, ‘Seeds in flight’, looks at rebirth after death.

‘Fading’ was premiered at the London A Cappella Festival, on 29 January 2015. ‘A woman’, and ‘Seeds in flight’, were premiered at The American School in Doha, on 7 May 2015 with 'You want' finally included in the set at the Dubai Proms of 2017 where it was performed by the BBC Singers.

In 2017 I heard Assaaleek Band for the first time, a band of Syrian musicians living in Beirut. One song particularly struck me. The singers all strummed wide frame drums as they intoned an old Arabic song. The melody was repetitive and melismatic and the lyrics reflected on the recent loss and destruction of their homeland, Syria.

I asked the band whether I might be able to borrow their song to use it my own composition, they were happy to let me do this. I chose to pair this music with a text by Syrian American activist Amal Kassir, a performance poet brought up in Denver whose poem 'My grandmother’s farm' I had come across. Amal was happy for me to set some extracts which paired well as both texts reflect on the values of ‘home’: Assaaleek Band lament the loss and destruction of their home and Amal Kassir talks about how her grandmother believed that the earth could not be broken by the tyrant, it would not yield to him and eventually he would be returned to it.

Many thanks to Assaleek Band for kindly allowing me to use their version of this traditional Syrian song and thanks also to Amal Kassir for allowing me to use extracts of her poem 'My grandmother’s farm'. Amal is represented by Book A Muslim. To learn more about her, visit bookamuslim.com/amal-kassir.

Flare
The orchestral work Flare takes its name from the opening paragraph of a short story called ‘Oil Field’ by the Saudi writer Mohammed Hasan Alwan about a young boy’s excitement at seeing the first flares of a new oil field on the horizon. The story reveals through a child’s naive eyes the mixed fortunes that the oil industry brings to his family’s conservative community. It is the layering of the story that intrigues me and this is what inspired the piece. The coexistence of things both true and contradictory is very familiar and there is a natural inclination to want to inhabit the world of the thrilled child rather than the adult’s informed reality. This conflict gives one’s perception a strangely wistful tinge and this is a piece about wistfulness. Smooth but angular lines of melody contrast against a steady onward rhythmic propulsion: there are no changes of speed in the piece, only variations in the pulse.

Sheikh Zayed’s parade
The inspiration for Sheikh Zayed’s parade comes from the Nabati poetry written by the ruler of Dubai, His Highness Sheikh Mohammad bin Rashid Al Maktoum. The poem that specifically inspired this piece of music is a eulogy to Sheikh Zayed, who is thought of as the founding father of the UAE. The Arabic title of the poem is called ‘The parade’, or in Arabic, ‘Harbyia’, which is literally a ‘song of war’. The ‘Harbyia’ is a well-known folk song of the region originating from the Bedouin oral tradition.

The traditional ‘Harbyia’ melody is directly quoted in the music at the opening and at the end of the piece. The composer aims to capture the character of the Harbyia dance: a massed celebration with men swaying their staffs and young girls swirling their hair across from one side to the other. Brass instruments were chosen for the piece because they are fitting for the theme of the music—a parade. The music’s rhythmic energy builds to a climax of powerful harmonies but then gives way to a more wistful middle section hinting at 'the scent of musk and perfume being carried on the breeze', mentioned at the beginning of the poem. Imagery derived from nature, is a characteristic of the Nabati tradition of poetry.

The premiere of this piece was given at the Gala opening of the Emirates Airline Festival of Literature in March 2011.

The tower
Joanna Marsh wrote The tower having spent six months living in the centre of Dubai watching the construction of the Burj Dubai, a one kilometre high tower, from the building opposite where she lived for 18 months.

Joanna found in Burj Khalifa a resonance with the Tower of Babel. Both were overwhelming architectural conceptions demanding a massive workforce who like worker bees crawling over it day and night. Something about the dullness of the windowless exterior and its megalithic monumental stature sewed the seeds that grew into this piece. Both towers were the products of a determined, ambitious nation that was seeking to dominate the sky—the landscape, the horizon: God’s world. The tower uses a wide variety of sources to create an imaginary account of the story of Tower of Babel including the Bible, the Mishnah and the Qur’an. The tale follows its inception, construction and ultimate destruction.