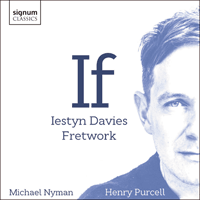 Nyman & Purcell: If & other songs

‘Iestyn Davies is on immaculate form in everything here’ (BBC Record Review)
‘What If does brilliantly is cut to the core of the difference between the two worlds. The rhetorical expression and quasi-improvised freedom of Purcell’s O Solitude (beautifully shaped and paced by Davies) and the rapt wonder of Music For A While blaze newly colourful and warm alongside the blanched landscapes of the Nyman. Purcell left no songs with viol accompaniment, so these consort arrangements by Richard Boothby are an innovation, and one that allows the composer’s sinuous accompaniments to weave with new texture around the voice’ (Limelight, Australia)

Michael Nyman at 75
Is there a contemporary composer whose music is more immediately recognisable than Michael Nyman? I can’t think of one: the insistent ostinanti, the bold, yet simply conceived harmony, the driving rhythms, the aggressive instrumentation, the heavy bass-line; all have combined to make his music instantly recognisable. He has been endlessly imitated, particularly by composers for moving images—film, TV, adverts and so on; yet these are pale imitations, not the real thing.

While he might be known now more for the music he wrote for Jane Campion’s awardwinning film from 1993, The Piano, he initially shot to fame a decade earlier with the music for Peter Greenaway’s film The Draughtsman’s Contract, set in seventeenth-century England. This lurid tale was filmed with striking originality, and Nyman mirrored this with his music, most of it derived from one of England’s greatest composers, Henry Purcell. Purcell’s music was well known to Nyman, as he had studied under the great musicologist Thurston Dart at King’s College in London in the 1960s, and had then produced the first modern edition of Purcell’s Catches in 1967.

So it was a natural choice to combine Nyman and Purcell on this disc. Purcell never composed vocal music with an accompaniment of viols, but his magnificent set of Fantazias and In Nomines for viols demonstrated his interest in the instrument; so it was but a short step to realizing Purcell’s original bass line and completing the harmonies with parts for four or five viols. While all three on this disc are on ground basses—that is the same bass line repeated over and over again—each song presented different challenges.

O solitude is a setting of the first and last stanzas (plus half of the third) of the poem La solitude by Antoine Girard de Saint-Amant, translated by Katherine Philips, who was a remarkable literary figure in seventeenth-century Wales and England. Its ground bass is unvarying, yet Purcell’s implied harmonies are exceptionally inventive.

The Evening Hymn is a setting of the poem by Bishop William Fuller, friend of the diarists Pepys and Evelyn. The arrangement for viols was made by Silas Wolston. The ground bass here moves to accommodate modulations to different keys, as does that of Music for a while, which is from the incidental music to Dryden and Lee’s translation of Sophocles’ play Oedipus, revived in 1692. Alecto is one of the Greek furies, with snakes for hair, whose work is to castigate mortals for their moral crimes.

In 2017 Fretwork commissioned Michael Nyman (with funds generously donated by Mark Reed) to write a new instrumental work for them, and he responded with Music after a while, which is based upon Purcell’s song, or more particularly upon its strikingly original bass-line, with its insidious rising chromatics. It was premiered in Milton Court, in London’s Barbican Centre in May 2018, just before this disc was recorded.

Fretwork had previously commissioned Nyman in 1992 to write a work for James Bowman and us for the Spitalfields Festival. Nyman described the remarkable chance encounter that led to the choice of text:

The text of the Self-Laudatory Hymn came to light while I was browsing among the bookshelves of an Armenian acquaintance in February 1992. Opening, for no apparent reason, a fat anthology entitled Ancient Near-Eastern Texts Relating to the Old Testament, edited by James B Pritchard, I found S N Kramer’s translation of this Hymn. I was immediately taken with its tone of unashamed self-congratulation (very suitable, I thought, for James Bowman’s voice) and its repetitive structure (very suitable for my music).

In conversation with another friend I learned that Inanna was not an obscure goddess known only to me and a few experts on Sumerian civilization, but a central focus of that civilization and a figure highly esteemed by feminists. In Kramer’s works: ‘Female deities were worshipped and adored all though Sumerian history…but the goddess who outweighed, overshadowed, and outlasted them all was a deity know to the Sumerians by the name of Inanna, ‘Queen of Heaven’, and to the Semites who lived in Sumer by the name of Ishtar. Inanna played a greater role in myth, epic, and hymn than any other deity, male or female.’

In the Self-Laudatory Hymn I have made no attempt to evoke Sumerian music (or music of any other period). The opportunity to work with the viols of Fretwork recalls my use of early instruments in the first Michael Nyman Band, which uses rebecs rather than viols; and also my studies in the 1960s with Thurston Dart (and his memorable Musica Britannica edition of Jacobean consort music) and the finest book ever written on English music, English Chamber Music by E H Meyer.

Some time during the 2000s, I came across Nyman’s song If, scored for piano and strings and thought it could work for viols—I made an arrangement and sent it to the composer, who approved. The calm simplicity of the harmonic pattern and melody makes for a compelling work, which expresses the child-like naïveté of the text. It was written, together with Why, to texts by Roger Pulvers as part of an animated film by Seiya Araki, The Diary of Anne Frank.

And then, having seen my arrangement, Nyman suggested I look at a work he had written for the Swingle Singers, Balancing the books, a wordless vocal-work in eight parts. I arranged this, but we didn’t find an opportunity to perform it until Fretwork was invited to take part in the Minimalism Unwrapped festival at Kings Place in London in 2015.

No time in eternity was commissioned by the French counter-tenor Paulin Bündgen with Ensemble Celadon in 2016 and first performed by them in Lyon in March of that year. It is a setting of several poems by the great seventeenth-century poet Robert Herrick: To music, No time in eternity, Fortune, The definition of beauty, Things mortal still mutable, The watch, To music. All are from his Hesperides, published in 1648. His most famous verse is ‘To the Virgins to make much of time’, espousing the sentiment to seize the day, or carpe diem; and we see similar sentiments in these epigrammatical works that Nyman has chosen to set. He was highly sensitive to music and a close friend of the Lawes brothers, Henry & William.

Michael Nyman was born in Stratford, in the east end of London on 23 March 1944. In addition to his current work as a composer, he is also a film maker, conductor, pianist, musicologist, writer and photographer. He studied at the Royal Academy of Music and, after his PhD studies with Thurston Dart, he went to Romania to collect folk music.

While working as music critic for The Spectator, he coined the term ‘minimalism’ in 1968. He also wrote for The New Statesman, The Listener and Studio International. His seminal work on new music—Experimental Music: Cage and Beyond—was published in 1974 and has recently been reprinted.

His preferred musical form is opera, and he has written several notable works in this form: The Man Who Mistook his Wife for a Hat, Facing Goya and Many and Boy: Dada.

More recently he has focused on composing soundtracks for silent films from the late 1920s: Jean Vigo’s A Propos de Nice, Sergi Eisenstein’s Battleship Potemkin and new soundtracks for three Dziga Vertov ﬁlms—Man with a Movie Camera, The Eleventh Year and A Sixth Part of the World.