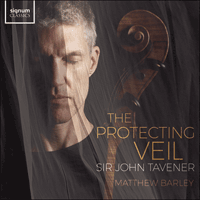 Matthew Barley leads the Sinfonietta Rīga in this exploration of Tavener’s musical works and inspirations, enveloping a monumental performance of The protecting veil with readings of WB Yeats and Frithjof Schuon by renowned actors Julie Christie and Olwyn Fouéré.

‘Even if you have other recordings of The Protecting Veil, I recommend this utterly beautiful and originally framed version unreservedly’ (Gramophone)
‘Barley's restraint [in The Protecting Veil] proves perfectly judged and a performance of great tenderness and eloquence unfolds, well matched by the excellent Sinfonietta Rīga’ (BBC Music Magazine)

'Transcendent with awesome majesty'
John Tavener wrote these words above the opening cello notes of The protecting veil, immediately communicating the scale of what we are about to hear. The work is universal, timeless, structurally perfect and emotionally powerful and as such, in my opinion, ranks as one of the greatest cello concertos. It also brings out the foremost quality of the cello: its ability to sing. In the composer’s words 'The cello represents The Mother of God and never stops singing'. And indeed, the cello sings without stopping for the entire 46 minutes of the piece, requiring huge mental and physical stamina.

Further emphasising the song-like nature of the piece, Tavener quotes two of his own songs—the Hymn to the Mother of God (track two) and the Hymn for the dormition of the Mother of God (track eight), and in fact the entire composition is in an extended song form. Seven of the eight movements are structured as a verse and chorus, each verse is new material, and the chorus is the peals of bells from the orchestra, answered by the solo cello, varied in each movement but clearly related—the first chorus comes just after seven minutes in track two.

And what is this great song about? The Feast of the Protecting Veil of the Mother of God is the Orthodox Christian feast day that commemorates Mary’s appearance at the church of Vlacherni (Constantinople) in the 10th century. According to legend, Mary appeared in a vision at night to Andrew the Holy Fool, and, surrounded by saints, extended her veil as a protective shelter for the Greeks, inspiring them to withstand an imminent Saracen invasion. This protective ‘almost cosmic power’ as Tavener put it, this unending love from the Mother of God, represented by the song of the cello (‘an icon in sound’) constitutes the bedrock of the work that is divided into eight clear sections. The first and last sections are both called ‘The protecting veil’, based around the note F, and the base of each subsequent section (titled after other orthodox feast days; see track listing), descends one note per section through a full scale. This slow-motion musical journey from one F down the scale to another happens in a way that echoes so many spiritual journeys—Hesse’s Siddartha springs to mind—that come full circle to finish where they began, illuminated by experience and time.

The protecting veil has the power to move the listener as much by its lyrical beauty, as by its underpinning rigorous and formal structure. I have already outlined the overall structure of the piece, and in addition, Tavener uses a number of compositional devices 4 that are geometrical in nature, for instance where a series of notes repeats in reverse starting with the last note, like 123454321, which can happen over sequences of more than 100 notes—it’s easy to just copy all the notes you have just written backwards, but to write ones that sound so beautiful when reversed takes great skill. Other techniques used are canon, augmentation, diminution, inversion, retrograde repetition and additive repetition. I will be posting a series of videos on my YouTube page (youtube.com/matthewbarleycello) to explain these terms and other aspects of the piece in detail, aimed both at those who understand the terms of classical music, and those who don’t. Tavener’s use of additive repetition is particularly interesting: at the end of the first section one of the most memorable passages of the piece occurs when the cello hangs on a high note and then gently swoops down more than an octave to an E, which is then the key of the subsequent movement. This passage repeats at the end of each movement, and each time one more note is added after the E, heralding the key of what is to follow eventually outlining the whole key structure of the piece: F-E-D-C-Bb-A-G-F.

In the end we should not be analysing all this technique as we listen—I love to see what makes things tick—we should be carried along by the compelling emotional narrative, much like in the music of Bach (I think Tavener’s motives for writing music were very similar to Bach’s), where the rigour and discipline of the composition allow the simple, deeply felt nature of the music to shine through. An example would be the fifth movement, ‘The lament of the Mother of God at the cross’. There is nobody who can’t be moved by imagining a mother kneeling beneath a cross on which her son is nailed—this deeply visceral image is so powerful and reaches beyond religion. After this extended solo passage in which the grief of the mother reaches a point where the mind becomes unhinged and sanity is threatened, the orchestra returns with a sound that I imagine is like the sound of nails piercing flesh—I can’t think of many passages of music where, in concert, you can feel as though the audience have stopped breathing, almost suffocated by the intensity. And then the joyful release of the next movement is truly intoxicating, however you interpret the meaning of resurrection.

The universal quality of the piece—and I am here describing the way the piece can communicate itself to anyone regardless of age, culture or education—lies in the fact that singing and emotion belong to all humans, and it is these qualities that help to give the piece its emotional power. For me, even the fact that Tavener did not choose sonata form or anything overtly classical, but a song form, also adds to the unusually broad appeal of the piece—it has the power to reach beyond the classical world.

Feast days, scales and retrograde inversions are like the skin and clothes of the piece, but underneath these compositional effects lies a more profound element, which is Tavener’s attention to what he called the Eternal Feminine. The focus here is Mary, the Mother of God—Theotokos—but it could be Shakti in Hindu, or the Earth Mother in an animistic culture—it is the universal and ancient idea of the power of the sacred feminine. Tavener’s belief was that many of the problems faced by humanity today are caused by an imbalance of the masculine and feminine. To illustrate this theme further I invited two wonderful and venerable actresses to read poems that were favourites of Tavener’s. Yeats’ He wishes for the cloths of heaven has a beautiful resonance with the veil of the title, The Mother of God speaks for itself, and the stanza by Schuon (that Tavener set to music in Mother and child) resonated with India through the mention of the gypsies, who originally came to Europe from India.

I discovered the link between The protecting veil and India quite by accident. In the cello part there are many grace notes (small extra notes tucked in before the main one), and by the first is an asterisk pointing to a footnote that says they should be microtones as in ‘the characteristic breaks in the voice of Byzantine chant’. It was years of thinking, occasional forays into Google and Wikipedia, and the picking of various brains before I had to admit that I really didn’t know what that meant and couldn’t find anyone who did, so eventually I called the composer just before a concert and asked what actually did it mean? I sung a couple of versions of how I could play it and he chose one, and I responded “Ah, you mean so it should sound a little like a slide in Indian classical music?”; he replied “Yes, exactly!” He went on to explain that he had been listening to a great deal of Indian music at the time of writing and it had influenced him greatly—and as this musical world has also had a big impact on my life, this was a eureka moment in learning the piece, opening all sorts of doors to new fingerings and ways of hearing certain passages. (After this realisation I was fortunate to spend an inspiring and formative day working on the piece with Tavener.)

Because of this Indian element to the music, I decided to include The song of separation and waiting that I learned from its composer, Sultan Khan, in a hotel room in Brisbane just before we played a concert together. I’ve played the piece many times since, and my favourite version is always with tabla player Sukhvinda Singh, who everyone knows affectionately as Pinky, a true master of rhythm and improvisation. This track and the solos on Mother and child are single takes and unedited.

Mother and child is a mysterious and touching choral work by Tavener, and I wanted to try conducting my own arrangement of it with some improvised responses on the cello. We only got to it in the last minutes of the recording session but I was so happy with the sound and phrasing from the strings of the Sinfonietta Rīga—warm, resonant and with that distinctive eastern European colour that works so well for Tavener’s Christianity of the east.