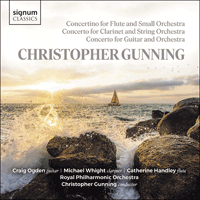 Three appealing new works from Christopher Gunning, each written out of admiration and affection for a musical friend: a light-hearted concertino for flute, a lyrical clarinet concerto, and a holiday-inspired guitar concerto.

Some of my concert pieces, such as the 3rd, 5th and 7th symphonies, are quite intense and weighty, but there’s another, more immediate and melodic, strand in my work, illustrated by the three concertos here. In each case my aim has been to provide the soloist with something enjoyable yet technically challenging to play, and to bring out those characteristics of the solo instrument I find the most appealing.

When composing anything, it’s always good to know who is likely to play it; several of my pieces have been for friends and acquaintances. To some extent I think my concertos reflect the personalities of the characters involved, or how I feel about them. Back in 1997, when I wrote On Hungerford Bridge, a concerto for soprano saxophone and orchestra, I had John Harle in mind. Later, in 2004 I wrote my Concerto for oboe and strings for my daughter Verity.

I met Catherine Handley when she was married to Vernon ('Tod') Handley, the conductor; he was recording my Yorkshire Glory back in 1989. It was only when our paths crossed again in 2010 that I learned what a gifted flautist she is. I told her I’d started a flute concerto but hadn’t got very far with it. The prospect that she might play something of mine was all I needed to get cracking again; the first movement was completed partly using sketches I already had, and I wanted to find a subtitle which said something about the piece. Because it is essentially light-hearted, I settled on ‘Time you enjoy wasting, is not wasted’, which has been attributed to various authors from Marthe Troly-Curtin in 1912 to George Bernard Shaw or even John Lennon.

Then, when I visited Catherine in Abergavenny, and we went walking in the hills together, I began to know what the second, slow movement should be like. I love the Welsh mountains and valleys and wanted to write something expressing the timelessness and stillness which mercifully one can still find in those parts; hence the subtitle: ‘And time stood still’.

Then came the last movement, where I just had to write something florid for Catherine that expressed pure unadulterated fun—she has a quietly wicked sense of humour! The subtitle ‘Time flies …’ seemed appropriate; with Catherine, that tends to be what happens.

Things took a slightly different course with my Clarinet Concerto. I composed it in 2005. It received its first performance in my then local church of St Mary, Ealing, at a charity concert given by Andrew Lyle and a locally assembled orchestra. Shortly after, I got to know Michael Whight, the marvellously energetic and altogether brilliant principal clarinettist in the Royal Philharmonic Orchestra. 'Have you written anything for the clarinet?' he asked. I quickly realised he would be the perfect person to tackle it, so I sent him my concerto and he enthused about it. We set about arranging for the RPO to record it straightaway.

The concerto has three movements, fast, slow and fast; the first movement, although moderately energetic, is the longest and explores the lyrical personality of clarinet and artist, while the second is rather elegiac. The last movement has some jazzy overtones and is predominantly witty.

Craig Ogden and I worked together on many episodes of a TV series, and later, during a recording session in 2010 with the BBC Philharmonic in Manchester, I suggested to Craig that I’d like to write him a concerto. To my delight he immediately said 'yes!' and although there was then no performance in view, I immediately set to work and found the music flowing quite freely. I concentrated on those things I feel the guitar does best; carry expressive melodic lines, play sonorous chords, and be rhythmically alive. I also found myself remembering a delightful holiday with family and friends in northern Mallorca; perhaps that’s why a holiday atmosphere pervades the outer movements and it’s certainly why I called it 'Requerdos do Mallorca'.

With an instrument as inherently quiet and intimate as the guitar there are obvious issues of balance when setting it with an orchestra, and although it must be discretely amplified in a concert hall, I didn’t want to feel that the soloist would be engaged in some kind of losing battle to make themselves heard; I therefore kept the orchestration light, but at the same time l wanted the orchestra to do much more than simply accompany the soloist.

The first movement grows out of repeated Es, from which the guitar plays some short phrases which constitute the first theme. A more jagged idea then takes over, followed by a third with a stately but jaunty rhythm. The rest of the movement then consists of a discussion of these three themes, which become more and more varied; after growing in intensity the music settles back into something very similar to the opening.

The second movement is a kind of slow aria, with a constantly repeated four bar motif—over this the guitar weaves a steadily evolving melody. After a slightly more dramatic middle section, the guitar plays an unaccompanied cadenza before returning to the first idea.

In the last movement I allowed myself to be more influenced by the guitar’s Spanish roots. It is mostly up-tempo, but with two slow interludes, and the soloist has a chance to display some very fast finger-work as well as beauty of tone.