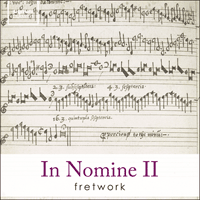 Over thirty years ago, Fretwork made its first recording—well, technically speaking it was the second album to be recorded, but the first to be released—and it was called ‘In nomine’, which consisted mainly of 16th-century examples of this remarkable instrumental form.

While this isn’t an anniversary of that release, we want to look both back to that first release and forward, to bring the genre up to date. There were several examples of the In nomine and related forms that we didn’t or couldn’t record in 1987, and this album seeks to complete the project.

The form was created unwittingly by John Taverner (1490-1545). His 6-part mass, Gloria tibi Trinitas, is based on the plainchant of that name. In the Sanctus, at the words Benedictus qui venit in nomine Domini (Blessed is he that comes in the name of the Lord), the six-part texture is pared down to two and three parts; and then, with the words 'in nomine' Domini, Taverner makes, for the only time in the mass, a complete statement of the cantus firmus, accompanied by three voices [listen]. This four-part section—very beautiful as it is—must have struck contemporaries as some kind of perfection, to be used as a template, to be emulated and copied. And then those copies were copied and changed again.

Typically, an In nomine would have the alto, or second part, playing this cantus firmus in long slow notes of equal length. The other parts would weave counterpoint around it, sometimes commenting upon it, sometimes ignoring it. Typically, the cantus firmus starts and ends on the note D—but there are many exceptions to all these ‘rules’.

There are several important moments in the tune. The opening rising and falling third is often imitated; The sixth and seventh notes moves the tonality away from the opening D into F; At the end of the second line here, it reaches its highest point and then (third note, third line) we have a semi-tone rise and fall, one of only two in the tune. Lastly, the shape of the tune falls gradually and gracefully from the highest note to the lowest, two notes before the final note.

One of the earliest and most prolific of the composers to imitate Taverner’s original was Christopher Tye (1505-1573), who composed at least 25 examples, many with titles. The titles are sometimes whimsical and sometime refer to the musical argument: 'Howlde fast', for example, tells the players to hang to their parts even when it may seem contradicted by the other parts. 'Re la re' is the three notes figure on which the piece is based; and 'Reporte' refers to the way the parts echo each other. Of Tye himself, we have this little anecdote from Anthony Wood (not a very reliable source):

Dr. Tye was a peevish and humoursome man, especially in his latter dayes, and sometimes playing on ye organ in ye chap.[el] of qu. Elizab. wh.[ich] contained much musick but little delight to the ear, she would send ye verger to tell him yt he play’d out of tune: whereupon he sent word yt her eares were out of Tune.

There are over 300 extant examples of In nomines composed by British composers in the 16th & 17th centuries. Our first disc contained both Taverner’s original and the most popular In nomine: Robert Parsons’s five-part example. However, Parsons (1535-1572) also wrote two magnificent seven-part In nomines and we present them here. There are only three examples of complete seven-part In nomines that have survived, and we have them all on this recording: Parsons’ two examples and Henry Purcell’s, that comes at the end of his exploration of the viol consort repertory of Fantazias and In nomines.

Both of Parsons’s seven-part In nomines are found in a huge ‘table book’, now in the British Library. It is called A booke of In nomines & other solfainge songes of v: vi: vii: & viii: parts for voyces or instrumentes. Interestingly, there are no eight-part pieces. I think the young Purcell saw this book, as the title to the second part of the manuscript where he wrote his immortal Fantazies, also in the British Library, echoes the earlier work: Here Begineth ye 6, 7 & 8 part Fantazias. Again, there are no eight-part pieces.

But in other respects the music is very different: Purcell calls for two high treble viols, three tenor viols and two basses, with the cantus firmus in the middle of the texture; while Parsons places the tune at the top of the texture for both works, and has a combination of low viols to weave an extraordinary polyphonic texture beneath.

The only duplication on this disc is John Baldwin’s (1560-1615) In nomine from 1592 in four parts. It’s a typically rhythmically tricksy piece from a composer who revelled in these complexities. His Proporcions to the minim is a favourite: the bass part has long notes lasting 5 minims each—a rather In nomine-like tune—while the upper parts move in a rather beautiful rarified ether, jostling for position mostly in minims. Gradually the treble part locks into notes half as long again; these notes are halved and halved again; and finally halved once more. Today, this technique is known as metric modulation. This leaves only the bass moving in the original speed. The original notation can be seen on the cover of this disc, in Baldwin’s neat and rather beautiful hand.

Nico Muhly (b1981) is unusual among today’s composers in that he has direct experience of the Anglican tradition, having sung in an Episcopalian church boys’ choir, with an intimate knowledge of the music of Byrd, Gibbons, Weelkes & Purcell. When we asked him to write an In nomine for us in 2015, he knew the tradition and what it meant. The result is a brilliant inversion of the genre: a shimmering texture of fast repeated notes is punctuated with long slower notes passed around the ensemble; as opposed to a texture of long slow notes punctuated by occasionally quicker movement. There is humour too in the title: ‘Slow’, while the tempo indication is ‘Actually fast’. It is a true In nomine, with three full statements of the cantus firmus, the last a melancholy epilogue, assailed by vocal exclamations from all sides.

Earlier, in 1995, we had commissioned Gavin Bryars (b1943) to write a companion piece to Purcell’s Fantazias and In nomines. Bryars chose to imitate the 6-part In nomine and the result was a modern classic. Bryars’s music often seeks to slow the pulse down to a kind of stasis where each event becomes more and more significant. Here he takes as example a majestically slow and inevitable work and extracts significant motifs and then creates a broad canvass to paint a dark and brooding work that revels in the colours of the viols’ extreme ranges.

Although John Bull (c1562-1628) wrote several pieces of consort music and one In nomine for viols—recorded on the previous disc—he was known as a keyboard virtuoso; and we have chosen to unpick his extraordinary In nomine in 11/4 to present here. Eleven beats per bar was certainly unusual at the time; it is divided up into two fours and one three, which makes a restlessness which is exacerbated when the whole thing is converted into triple time to conclude.

Bull also wrote a famous ‘Hexachord’ fantasia for keyboard which used all twelve transpositions of the hexachord, and thus went through all the keys, requiring an equally-tempered keyboard. It has been suggested that he presented this work in his inaugural lecture at Gresham College, and that it was emulated by Alfonso Ferrabosco II (1575-1628) with his two hexachord fantasias for 4 or 5 viols, which also go through all (or most) of the keys.

Ferrabosco may sound Italian, but was born in Greenwich and never left the country. His father, of the same name, was Italian, and was a highly esteemed member of Elizabeth’s musical establishment; he married Susanna Symons and soon after the birth of their two children, they left for Italy. Elizabeth wouldn’t let the children follow their father, so they were brought up by another member of the court, Gomer van Awsterwyke. The young Alfonso eventually became himself a member of the court band with the position of ‘musitian for the violles’. He was to become one the most celebrated English viol players. He wrote six In nomines, three in 5 and three in 6 parts, and none is more characteristic than the monumental In nomine through all the parts, where the cantus firmus, rather than being assigned just to one part and to notes of equal length, is moved down through the consort, from top to bottom, treble to bass and given rhythmic articulation.

Which leaves John Ward (c1589-1638); who came from Canterbury and was a chorister in the cathedral, and then attended the grammar school there; he then joined the musical establishment of Sir Henry Fanshawe. He composed and published madrigals but wrote more music for viol consort, which was very popular both in his lifetime and after, to judge by the sources. Most of his five-part consorts must have been composed before 1619 when Francis Tregian died, who was one of the principal copyists. This is his only In nomine in five parts and shows the form still in robust health nearly a century after its birth. William Lawes was to write several examples in 5 & 6 parts a decade or two later; and John Jenkins likewise wrote two wonderful works at a similar time. The last work written before the present time was Purcell’s In nomine in 7 parts.

This uniquely English form, that lasted nearly two centuries, was, surprisingly, little remarked upon. Roger North, after Purcell had died, did mention it, but in rather disparaging terms:

It is a sort of harmonious murmur, rather than musick; and in a time when people lived in tranquillity and at ease, the enterteinement of it was aggreable, not unlike a confused singing of birds in a grove. It was adapted to the use of private familys and societys; and for that purpose chests of violls, consisting of 2 trebles, 2 means, and 2 bases were contrived to fullfill 6 parts, and no thro-base (as it is called) was then thought of, that was reserved to other kinds of musick.

Yet, it has proved remarkably resilient and, as a form, capable of enormous variation in treatment. It has inspired some of the greatest composers to the heights of invention and creativity; and we viol players are grateful that it is was, and is, conceived principally for consorts of our instruments.