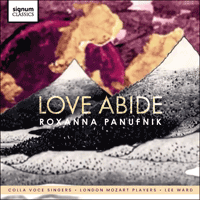 'Love abide encapsulates the very contemporary ethos of multicultural spiritual devotion in a world populated by a rich diversity of faiths—all feeling, as deeply and as aesthetically, the compelling potency of music with love.' (Roxanna Panufnik)

This album was made with support from fourteen principal sponsors who, in return, were able to dedicate their track to someone they love—their dedications were read out to the musicians at the start of each session, so that the sponsors’ individual tracks were performed with their loved ones very much in mind.

My ongoing mission to build musical bridges between different faiths was inspired by the birth of my first child, in 2002, when I started to ponder deeply on what kind of world I was bringing her into. Religious conflict and wars that involve it are constantly in the news—but we rarely hear enough about the affirmative aspects of our many faiths, such as the phenomenal beauty of the varied cultures surrounding them. Exploring these cultures has unearthed a bounty of stunning chant and verse and has brought me closer to my own personal spiritual beliefs.

Each work on this album focuses on a particular mood or sentiment around the theme of love, expressed in a musical language that echoes the origin of the words. I’ve drawn on texts from different faiths, from the fifteenth-century Zen Master Ikkyū Sōyun to the well-loved thirteenth chapter of 1 Corinthians; from the Christian mass setting to the fourteenth-century Sufi poet and mystic Rumi, to the ancient Hebrew Psalm 136 (135). And I’ve married a traditional Anglican text with a Catholic one—creating a truly Ecumenical Magnificat. Within the music you will hear fragments of Spanish Sephardic chant, Christian plainsong, Sufi rhythms and a Japanese lullaby to soothe the soul.

Love abide encapsulates the very contemporary ethos of multicultural spiritual devotion in a world populated by a rich diversity of faiths—all feeling, as deeply and as aesthetically, the compelling potency of music with love.

Love endureth
Commissioned as part of a psalm series by Soli Deo Gloria, the original brief referred to the 'old Hebrew psalms' which planted the idea in my mind to bring a strong Jewish flavour to both the music and the words. I have used two fragments of Spanish Sephardic chants and, half way throughout the piece, substituted the English response for its Hebrew equivalent 'Ki L’olam chasdo'—'For forever His mercy'.

Love abide
The genesis of Love abide’s commission was the pinnacle of Love and devotion—a commission by The Choral Arts Society Philadelphia, USA, that was funded by philanthropist Paul Rowley, who wanted something composed in memory of his late wife, Miriam Primitch. She sang alto in the choir for fifteen years—I was told that she would literally 'glow' after every performance. He specified that he would like the famous verses on Love from the Bible’s first book of Corinthians, with its timeless message: you can have anything in the whole wide world but it is worth nothing without love.

For the first movement, I was free to choose another poem to accompany this. Love is the master, by Rumi (the thirteenth-century Sufi mystic and poet) is just as fervent in its celebration of love, but in a wilder and more passionate way than the bible verses it precedes. I have used the Sufi Duyek Velveleli rhythm as a quasi 'riff' in the bass and the Turkish Zengüle mode (imagine a scale of C with a D flat and an A flat), giving the music a more Eastern flavour. The rhythms, harmonies and vocal lines start quite sedately with parts of the choir chanting 'Love is the master' in a trance-like fashion. As the music progresses all these elements become more and more intense until, fraught with irrevocable ecstasy …

The second movement, called Love abide (as well as the title of the whole piece), is much calmer and infused with a more romantic—rather than passionate—ardour than Love is the master. Flowing and interweaving scales in the organ and harp accompany most of the movement creating a calm, dream-like atmosphere. Soloists, choir and orchestra end the piece together, with intense joy and optimism.

Magnificat and Nunc dimittis
It was a Precentor friend of mine who suggested the idea of interpolating the Ave Maria (the 'Hail Mary'—mostly used during a Catholic Mass) with the Magnificat (a fundamental part of Anglican Evensong), which has created this Ecumenical work! The Ave Maria/Hail Mary, those words of the Archangel Gabriel telling Mary that she was carrying God’s son, must have been utmost in her mind in the subsequent Magnificat, in which she relates her feelings on that awesome news, to her cousin Elisabeth. Piecing the two texts together, they have very close associations—it seemed a very natural thing to do. This work was a joint commission between St Mark’s Episcopal Church, in Philadelphia USA, and the Exultate Singers who are performing it on this disc.

Simeon’s speech on the fulfilment of prophecy at the Messiah’s/Jesus’s arrival starts more reflectively, again with a little Latin—this time just the first line of the Nunc dimittis. The music gradually builds up momentum until it echoes the more wild and theatrical Magnificat, ending with the same last celebratory lines.

Zen love song
In Zen love Song the beautifully poignant traditional Japanese lullaby Edo Komoriuta continues throughout the piece—interchanging between the accompanying shakuhachi (Japanese bamboo flute) and the voices—as a backdrop to two of fifteenth-century Zen Master Ikkyū’s highly romantic and sensual poems. The lullaby’s words (sung in Japanese) depict the loss of a little boy’s beloved nursemaid who has gone back to her home. This chimes with how Ikkyū feels at the loss of his 'lovely miss' to another man.

'I love you when you bow in your mosque, kneel in your temple, pray in your church. For you and I are sons of one religion, and it is the spirit.' (Khalil Gibran)