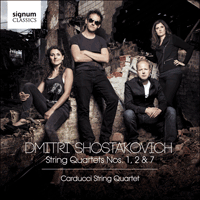 Described by The Strad as presenting 'a masterclass in unanimity of musical purpose, in which severity could melt seamlessly into charm, and drama into geniality', this release is the second in the Carducci String Quartet's Shostakovich cycle.

‘These players understand what it's all about, and the sound is always beautifully honed’ (BBC Music Magazine)

String Quartet No 2 in A major Op 68
Shostakovich began his second quartet almost immediately after completing his Piano Trio No 2 in the late summer of 1944, at the state-funded ‘House of Rest and Creativity’ in Ivanovo. He completed it within just 19 days, on 2 September; it was premiered on 14 November that year, together with the Piano Trio, by the Beethoven String Quartet, which would henceforth premiere every one of Shostakovich’s quartets except the last (No 15).

The second quartet is altogether larger and more ambitiously scaled than its predecessor, and more truly represents the tremendous range of colour and expression Shostakovich would encompass in his quartets. The crude, folk-like exuberance of its opening may suggest Bartók as an obvious predecessor; yet Shostakovich had in mind an example far closer to home. This was not Vissarion Shebalin’s late-Romantic style ‘Slavonic’ fifth quartet (1942), notwithstanding Shostakovich’s dedication of his second quartet to his colleague in honour of their twenty years of friendship; rather, it was certainly Prokofiev’s remarkable and still under-appreciated String Quartet No 2, composed in 1941—a work which not only made use of (in this instance genuine) folk themes, but which demonstrated the expressive and dramatic potential of the quartet medium in a manner which clearly inspired Shostakovich’s subsequent essays in the genre.

Not long after the ‘Overture’s folkish style opening, a more anguished, keening voice is heard from the violins—this being the ‘second subject’ in this sonata-form movement. In the subsequent strife-filled development section, even the folk theme appears to have its brightly optimistic character bashed out of it: it eventually re-emerges, played an octave lower than at its first appearance and with its formerly bright Lydian character bent out of shape. Yet the movement ends in a relatively optimistic mood.

The second movement, ‘Recitative and Romance’, begins with the first violin declaiming a lament over long sustained chords played by the rest of the quartet. Then follows a bitter-sweet romance or song, sometimes in gentle 3/4 time but often losing that pulse as the lead violinist’s music becomes reflective. The movement ends with a closing recitative.

The third movement, ‘Waltz’, starts with the cellist introducing a rather sinister melody. Even the trio section, introduced by the lead violin, sounds wary and merely ‘going through the motions’ of what might be a winsome melody now bent out of shape. The music becomes increasingly febrile, yet eventually calms down and ends with the cello’s sinister but at least well-defined theme.

The finale, ‘Theme with Variations’, starts with a stern Adagio, punctuated with brief rhapsodic phrases for the lead violin, before the violist introduces a folk-like theme, taken from the recently completed Piano Trio. This goes through a series of variations, at first orderly but becoming increasingly agitated in character. The storm eventually abates, and then—as if nothing untoward has happened—cello and viola play the theme as a suave duet as the violins twitter above. This gives way to a more introverted mood, and a return of the theme to folkish style before the grave Adagio theme reappears with its rhapsodising violin. This is combined with the folk theme in a noble final statement in A minor.

String Quartet No 1 in C major Op 49
Shostakovich had written for string quartet on at least two occasions prior to his first ‘official’ quartet: one being an arrangement he made in 1931 of two pieces he had already composed, which he dedicated to the Jean Vuillaume Quartet; the other being for his film score Podrugi (The Girlfriends, 1934). Yet it was only after the premiere of his fifth symphony that he first wrote a string quartet for the concert hall, between 30 May and 17 July 1938. He himself explained: 'I wrote the first page as a sort of original exercise in the quartet form, not thinking about subsequently completing and releasing it. As a rule, I fairly often write things I don’t publish. They are my type of composer’s studies. But then work on the quartet captivated me and I finished it rather quickly.'

Later, perhaps aware that listeners and cultural officials were bound to attempt to find meaning in the work, he claimed: 'In composing my first quartet, I visualised childhood scenes, somewhat naïve and bright moods associated with spring.' Yet it was far from his nature to write truly ‘naïve’ music. True, the choice of so ‘plain’ a key as C major may have been an attempt to create a neutral space for creating his first full-length string quartet: but so obvious a flag that this is to be ‘pure’ or even ‘abstract’ music without programmatic associations seems provocative given that the music, closely listened to, clearly has both feeling and a wry sense of humour.

From the first quartet’s opening ‘Moderato’, the almost placid chords are soon clouded by disconcerting dissonances: one may feel the music is playing at being calm rather than being truly at peace. There is a satirical edge to the second thematic idea: against the viola ‘ticking’ on a single note, the cello plays a would-be jaunty accompaniment figure, its scooping glissando between the first and second notes undermining any ‘innocence’ its simple-minded pentatonicism (that is, as playable on the black notes of a piano) might have suggested. Notice how, in contrast, when the first violin picks up this theme from the cello it plays it ‘innocently’ without that insinuating glissando—maybe like the ‘naïve child’ Shostakovich had in mind. (Shostakovich later used a similar pentatonic accompaniment for the ‘invasion theme’ in his 'Leningrad' symphony, which suggests he may have invested the idea with a brutish simple-mindedness.)

The second movement, again marked ‘Moderato’, starts with the viola playing a grave, unaccompanied folk-like theme, eventually accompanied by cello pizzicato. The music becomes more emotionally intense as the first violin takes up the theme, the second violin creating anguished passing dissonances in its accompanying counterpoint, at odds with the grave formality previously suggested by the viola and then by the first violin’s occasional decorative cadential trill. When all four instruments play together that deeper anguish appears to erupt through the music’s formal surface. The viola theme eventually returns, with pizzicato accompaniment ping ponging between cello and second violin, followed by the first violin playing the theme with characteristically more poignant harmonisation.

The brief third movement is effectively in the form of a scurrying scherzo, followed by a theme so incongruously suave that it is almost comical—though, typical of Shostakovich, one is left slightly uncertain: given the context, could this theme be quite so ingenuous and amiable as it appears?

The finale is more straight-forwardly celebratory in style, with a fanfare-like opening theme and much exhilarating quaver figuration akin to the finale of Prokofiev’s 'Classical' symphony.

String Quartet No 7 in F sharp minor Op 108
If Shostakovich’s first quartet is remarkably concise and ‘modest’ in scale, pithier still is his seventh quartet. Completed in March 1960, he dedicated it ‘In Memoriam’ to his wife Nina, whose fiftieth birthday should have been in that year but who had died in 1954 from cancer. One can hear in this quartet something of her character—highly intelligent and sharing Shostakovich’s taste for the absurd and ridiculous. Though their marriage had been far from smooth, she had been a steadying influence on his life, particularly through the trauma of his official periods of disgrace in the late-1930s and in 1948.

In composing his previous quartets, Shostakovich had scrupulously followed a predetermined sequence of keys: according to this, his seventh quartet should have been in E flat major. However Shostakovich, significantly, chose to break this pattern by writing his new quartet in F sharp minor, the key associated with such anguished music as Peter’s remorse in Bach’s St John Passion, and—particularly close to Shostakovich’s heart—Mahler’s unfinished tenth symphony.

Yet the seventh quartet starts not so much modestly as slyly, with a mordant yet disarming humour. The first movement (the three movements are meant to be played in immediate succession without a break) opens with the first violin playing slithery little phrases punctuated with obtuse simple-mindedness by the cello; it continues with such comic stealth that it could pass for a self-standing vignette or encore.

But then we hear a veiled and ghostly lament played by the two muted violins, eventually joined by viola and cello in their mid-high register, who add to the music’s spooky air with an upward glissando. The movement then takes a serious turn as, against a heartbeat-like pulse played by the second violin, the viola and cello play a brooding theme in unison.

The final movement suddenly springs into action, and launches a fugue taut as a coiled spring, finally manifesting an almost brutish anger with the cello’s augmented statement of the fugue subject: we are very far indeed from the deceptively flippant mood of the first movement, even—or perhaps particularly—when a theme derived from that movement eventually emerges in counterpoint with the scurrying semiquavers, leading to a fortissimo statement of the opening theme expressed now with a mix of despair and anger. All passion spent, the music subsides and once again the strings are muted for the final wan, Ophelia-style dance with its dream-like recollections of themes from the opening movement.