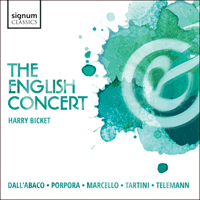 Concerti by Telemann, Tartini & others

A diverse selection of concertos—by Dall'Abaco, Porpora, Marcello, Tartini and Telemann—from the first half of the eighteenth century, when a handful of elite court orchestras competed to recruit Europe’s foremost instrumentalists. This is the tradition emulated now for four decades by The English Concert, and the results are glorious.

‘Here's that increasing rarity: a Baroque disc with no conceptual axe to grind, no over-arching theme—save for giving members of The English Concert a concerto moment in the sun—and seemingly out to do little more than delight (which it does so in spades) … galvanised, buoyant, everything is moulded with scrupulous good taste and sparkle’ (BBC Music Magazine)

The English Concert is an orchestra which draws its inspiration from the elite orchestras of eighteenth-century Europe: its members are recruited from amongst Europe’s foremost instrumentalists who are led either from the harpsichord or by their principal violinist or Konzertmeister, just as were the famed court orchestras of Dresden, Munich, Mannheim Potsdam and others. This recording is a showcase for the leading instrumentalists of today’s English Concert, playing on eighteenth-century instruments and amongst the world’s finest musicians in the long tradition of the great Italian and German masters whose works they perform.

Evaristo Felice Dall’Abaco (1675-1742) was born in Verona, the son of a noted guitarist, Damiano Dall’Abaco. Unusually, he appears to have been a skilled player of both violin and cello, having studied both instruments with Giuseppe Torelli. His first post was as a violinist in the court orchestra in Modena, but in 1704 he moved to Munich where he was taken on as a cellist in the court orchestra of Maximilien Emanuel, Elector of Bavaria. After only a few weeks Dall’Abaco was forced to flee, with the rest of the orchestra and courtiers, following Maximilien’s defeat by the Duke of Marlborough at the battle of Blenheim. Most of the musicians eventually reached Brussels, where Dall’Abaco was to spend the next ten years, absorbing the musical style of the French and Dutch into his native Italian musical ‘language’. This fusion of styles is exemplified in the Op 5 Concerto Grosso in D which begins with a decorous Allegro reminiscent of Arcangelo Corelli’s Op 6 concerti, but the middle movements, especially the cantabile Aria, are distinctly French in their inspiration, while the concluding Allegro, in an energetic triple time, has a rustic drive which is more or less uncategorisable. This stylistic cross-fertilisation gives Dall’Abaco his own distinctive musical voice.

Dall’Abaco’s Op 5 collection was published in Amsterdam in 1715, in which year Maximilien was restored to his Bavarian throne. Dall’Abaco returned to Munich, this time as a violinist, having been rewarded for his loyalty with the post of Konzertmeister, remaining in post until his retirement in 1740.

Nicola Porpora (1686-1768) was a gifted composer and musical pedagogue who commanded the highest respect from the leading musicians of his time. Amongst his most devoted followers was the ‘superstar’ castrato, Farinelli (1705-1782), whom he taught and coached throughout his professional career, the leading librettist of the eighteenth century, Pietro Metastasio (1698-1782), and, most significant of all in terms of his compositional output, none other than Joseph Haydn, who claimed to have learned the 'true fundamentals of composition' from Porpora while serving as his valet and accompanist.

As was common amongst eighteenth-century musicians, Porpora led a peripatetic life, travelling frequently to Venice and sometimes further afield to Vienna and Dresden. He also spent seven years in London (from 1730 to 1737) as director of the opera company, the so-called ‘Opera of the Nobility’, established in opposition to Handel. Porpora’s instrumental compositions owe much to contemporary operatic style, especially in their thematic material which is both highly ornate and inherently ‘vocal’. In the cello concerto the cello is of course the virtuoso ‘singer’, although its tenor voice is often also involved in the musical texture too. Both allegros, the first being a double fugue, feature exotic passage-work, while the slow movements are as beautiful as anything to be found in this mid-baroque period.

Nicola Porpora lived to the age of 82, dying in Naples, his home city, in poverty and out of fashion. He had suffered the misfortune to have been overshadowed during his best years by that musical giant, Handel, and in his declining years by changing musical tastes and the rise of galant and Classical styles.

Alessandro Marcello (1673-1747) was the eldest son of a respected and influential aristocratic family in Venice. The family’s high social rank meant that the young Alessandro, and his younger brother Benedetto, would receive a ‘gentleman’s’ education which included music of course, but which precluded the pursuit of music in anything other than an amateur capacity as a ‘nobile dilettante’. Alessandro was taught violin by his father Agostino, and had additional music tuition from Francesco Gasparini (a predecessor of Vivaldi at the Ospedale della Pietà) and from the then organist of San Marco Cathedral, Antonio Lotti. However, as befitted his social position, a career in the Venetian judiciary and as a diplomat for the Republic followed, and his music was published under the pseudonym Eterio Stinfalcio.

Today Alessandro Marcello is remembered almost exclusively for his oboe concerto (published in 1716 by Roger, the same Amsterdam publisher as of the Dall’Abaco concerto), and even this is sometimes misattributed to his more prolific brother Benedetto. The oboe concerto was also unwittingly misattributed (although thereby achieving much wider vicarious fame) by J S Bach who mistakenly believed it to be by Vivaldi and included it, arranged for solo harpsichord, in a volume entitled 'XVI Concerti nach A Vivaldi'.

The antiphony between the three upper strings and the solo oboe in the opening of the first movement, the reiterated chords in the accompaniment of the slow movement Adagio, and the solo opening of the final Presto are all features which give the work its individuality, revealing the extraordinary level of musical skill and ‘professionalism’ even amongst the musical ‘amateurs’ of the most serene republic of 18th-century Europe.

In common with many musicians of the period, Giuseppe Tartini (1692-1770) was educated by priests with a view to his own eventual ordination. However, in 1709 he enrolled as a student of law, and any lingering aspirations to the priesthood were finally abandoned when he scandalously married the niece of the local bishop of Padova. This caused such outrage that Tartini was obliged to flee to Assisi, without his new spouse with whom he was not re-united for five years.

Tartini seems to have used his time well in Assisi, honing his legendary technical skills on the violin to such effect that a reconciliation with the Bishop was eventually achieved, and before the age of thirty he had returned to Padova as director of that city’s orchestra at the Basilica of St Anthony. Such was his growing reputation, indeed, that he negotiated for himself a generous contract which allowed him to accept numerous engagements: in 1723, for example, he was in Prague playing at the coronation of the Habsburg Emperor Charles VI as Viceroy of Bohemia. Tartini’s career as a touring virtuoso was brought to an abrupt end in 1740 by a mysterious injury to his bowing arm, but he retained his post as orchestral director in Padova for the next 30 years and all the leading violinists of the next generation continued to beat a path to his door.

Tartini’s playing was famed for its combination of technical and poetic qualities. The latter are particularly a feature of his slow movements for which the melodies have a uniquely vocal quality. Indeed in some of them, including in this B minor concerto, the tune is a setting of an actual text, with the words written beneath the notes. Here the text, ‘Lascia ch’io dica addio’ (‘Let me say farewell’), could be said to apply to the first movement too, a rather melancholy, but nevertheless dramatic Allegro assai. The final movement, though, is an incisively rhythmical Allegro in which graceful tutti passages alternate with brilliant soli.

Given our modern-day reverence for J S Bach it can seem surprising that in the musical world of the mid-eighteenth century Georg Philipp Telemann (1681-1767) was the North German composer of supreme fame and influence. This was partly thanks to the sheer quantity of music composed during his long life (Telemann was born before Bach, yet by the time he died Haydn was a mature composer aged thirty-two and Mozart had written his first operas), and partly due to his early mastery of the opportunities for self-promotion presented by the explosion in music printing and distribution in the early decades of the eighteenth century. Telemann’s early works often explore a kind of fusion between the melodic and rhythmic energy of the Italian concerto and the ornamented elegance of French music of the time. The Viola Concerto, probably dating from 1712, is typical in that it has, in Telemann’s own colourful description 'the smell of France' in the slow movements while owing much to Corelli in the rhythmic drive of the faster movements. The Largo and Allegro form an opening-movement pair, but it is the beautiful third movement Andante which is the heart of the work, revealing Telemann at his most elegant and harmonically adventurous.