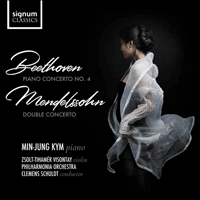 Steinway Artist Min-Jung Kym makes her recording debut with Beethoven’s Piano Concerto No 4 and Mendelssohn’s Double Concerto, in which she is joined by violinist and regular duo partner Zsolt-Tihamér Visontay.

Beethoven Piano Concerto No 4 in G major Op 58 (1804/6)
In 1803, Beethoven famously declared: 'I am not satisfied with what I have composed up to now. From now on I intend to embark on a new path.' The same year saw the completion of the 'Eroica' symphony, unofficially launching the composer’s celebrated ‘heroic’ period. Over the following decade, Beethoven produced music of unprecedented magnitude. It was also during this time that his worsening deafness became a personal crisis. Beethoven responded with music that was epic and defiant.

The breadth and ambition of the 'Eroica' are echoed in the works surrounding it in other mediums: the 'Waldstein' and 'Appassionata' piano sonatas, the 'Razumovsky' quartets ('They are not for you', Beethoven said to the violinist Felix Radicati, who found the Razumovskys incomprehensible, 'but for a later age!'). It was moreover a period of furious productivity. In 1806, Beethoven completed, in addition to the 'Appassionata' and 'Razumovskys', his fourth symphony, fourth piano concerto, and violin concerto; in 1807, the third cello sonata, the iconic fifth symphony, the Mass in C; 1808: the Opus 70 piano trios and the 'Pastoral' symphony.

The famous solo piano introduction to the fourth piano concerto immediately sets it apart from other signature ‘heroic’ statements. In contrast to the vigorous opening salvos of the fifth symphony, Appassionata, et al., the concerto begins with a gentle utterance: piano, dolce, searching yet at peace. This opening gesture ends in the dominant key of D major; the orchestra replies in distant B major, presaging the harmonic nuance that colors the entire work.

Despite the serenity of the opening, a close listen reveals the four-note, ‘Fate knocking at the door’ rhythmic motif of the fifth symphony embedded into this first theme, three times in succession—the peaceful yang to the symphony’s stormy yin. But in characteristically Beethovenian fashion (in this regard, sharing the fifth’s genetic code), the material presented in these first five measures will be mined exhaustively. Those four repeated notes course through the movement.

The piano serves as the clear protagonist throughout, but the precise nature of the journey is elusive. The hero is strong in his stillness, somehow lacking—transcending—the visceral thrust of the fifth. Indeed, the seemingly bemused, stream-of-consciousness quality of Beethoven’s hypervirtuosic writing, aided by the delicate shading of his orchestration, is one of the concerto’s miracles.

The pithy Andante con moto is an equally extraordinary creation to the first movement, but of a starkly different character. It is often described as depicting Orpheus in Hades, with the piano again the mythic hero, taming the Furies at the gates of hell. The soloist, alone, presents the movement’s turbulent climax: an anguished trill above descending chromatic cries.

From here, the concerto proceeds post-haste to the galloping refrain of the bright Rondo finale, three-dimensionalized by a series of vivid episodes. The subtle refinement of Beethoven’s harmonic sensibility is on further display: the movement begins in C major, arriving at the home key of G barely in time for the work’s conclusion. Despite what seemed, at the concerto’s outset, an unlikely heroic journey, the emergence from the tortured slow movement to this triumphant finale fully epitomizes Beethovenian heroism.

Though critically lauded in the May 1809 Allgemeine musikalische Zeitung as 'the most admirable, singular, artistic, and complex Beethoven concerto ever', Beethoven’s fourth piano concerto went largely ignored in the years following the composer’s death. Felix Mendelssohn, the same music-historical hero who rescued Bach’s St Matthew Passion from neglect, revived interest in the fourth concerto, performing it on his final concert in London in 1846.

Mendelssohn Concerto for violin, piano and string orchestra in D minor
In the decades following his death in 1750, Bach’s music fell, if not quite into obscurity, into some measure of neglect. But in 1824, the 15-year-old Felix Mendelssohn received from his grandmother what would be a gift of great historic consequence: a copy of the score to Bach’s St Matthew Passion. Five years later, Mendelssohn’s obsession with Bach and his particular affinity with this work culminated in a celebrated performance of the Passion at the Berlin Singakademie. The performance—conducted by the 20-year-old Mendelssohn—revitalized interest in Bach’s music throughout Western Europe, thus crediting Mendelssohn as the author of the modern Bach revival.

Mendelssohn composed his concerto in D minor for violin, piano, and strings in 1823, as a fourteen-year-old prodigy. The well-to-do Mendelssohn family regularly staged Sunday morning musicales at their home throughout Felix’s youth as a vehicle for his (and his sister Fanny’s) blossoming gifts; the 'double concerto' was composed for and premiered at one of these events. Though composed during Mendelssohn’s adolescence, the concerto exhibits the craftsmanship of a tremendously precocious composer. Not surprisingly, the prodigious young Mendelssohn caught the attention of Western Europe’s musical community through these musicales and came to be regarded by many as the second Mozart. Astonished at his rapid development, Mendelssohn’s teacher Carl Friedrich Zelter noted: 'He is growing beneath my eyes.'

At the time of the double concerto’s composition—one year prior to his discovery of the St Matthew Passion—Mendelssohn was very much under the spell of Bach, as much as he was absorbing the musical innovations of his own time, particularly the late works of Beethoven. The double concerto reflects this dichotomy between the Baroque influence on Mendelssohn’s music and the emerging Romantic energy that would come to define the nineteenth century. Moreover, in addition to the synthesis of Baroque and Romantic elements, another striking element of the work is Mendelssohn’s treatment of the two soloists: the violin, a brilliant, melodic instrument, generally entrusted with music of soaring lyricism; the piano, Mendelssohn exploits for its massive sonority, combining powerful chordal textures with dazzling runs up and down the keyboard.

Also noteworthy about the concerto is its sheer youthful exuberance. One can hear in this work how much music the young, insatiably curious Mendelssohn has swirling around in his head—and it all comes out, unapologetically, in this no-holds-barred concerto. The work begins with the strings issuing a contrapuntal theme, reminiscent of a Bach fugue, but infused with the spirit of Romantic Sturm und Drang. As the theme unfolds, the contrapuntal texture grows increasingly intricate.

Mendelssohn introduces a long-breathed second theme, in F major—a markedly Romantic contrast to the compact first theme. The orchestral exposition ends with a return to the Bachian counterpoint of the opening measures; but the piano’s furious entrance rips the music from its Baroque reverie back into the era of Beethoven.

The soloists unite the Baroque and Romantic idioms, with the piano presenting the Bachian first theme in its left hand, as a foundation for the overt Romantic gestures in the right hand and the violin. The rest of the ensemble follows suit. The soloists soon take over the lyrical second theme; the strings answer with a fragment of the Bachian theme, which, in short order, and seemingly out of nowhere, plunges the music into showy salon fare. One of this movement’s greatest delights lies in discovering how the young and, at times, cheeky Mendelssohn inventively weds together all of these elements: Baroque counterpoint with Romantic Sturm und Drang, profundity with showmanship, heroism with salon music.

Later in the movement, Mendelssohn introduces another dramatic turn: a declamatory recitative in the violin, theatrically set above piano tremolando. It’s easy to imagine this music, in another era, as the soundtrack to a love scene in a silent film. This dreamy music segues abruptly back to the frenetic energy that came before—from which Mendelssohn steers the first movement to its final measures.

Mendelssohn follows the fireworks of the concerto’s expansive first movement with a heartfelt Adagio. After the initial tutti statement of the theme, most of the movement is given over to an intimate dialogue between the two soloists. The full ensemble comes together again only for the movement’s magical conclusion. The warm texture of the strings, playing sotto voce, surround the soloists with an ethereal glow.

The final movement begins with an impassioned statement, uttered first by the piano, then joined by the solo violin. The full ensemble responds with emphatic terseness. The fiery energy of this music is countered by brighter, elegant second theme. Throughout the proceedings, whether tempestuous or calm, Mendelssohn spotlights the soloists throughout with passages of pyrotechnic virtuosity.

Why the fourth Beethoven Piano Concerto? There are so many recordings of this concerto that I admire, from Emil Gilels, Claudio Arrau and Wilhelm Kempff from one generation to Lars Vogt and Leif Ove Andsnes to another. The simple answer is that I wanted to record something that I enjoyed playing, and this concerto—one of my favourites—has always intrigued me. The moment the piano opens with this passage almost from nowhere, the association in the second movement of the tale of Orpheus taming the Furies at the gates to Hades to the jubilant Rondo third movement, I took to the concerto immediately when I first began studying it and I have travelled with the work having performed it several times over the years, and recently with the culmination of this recording.

Pairing it with the Mendelssohn Double Concerto was a very natural choice for me, because Zsolt is a regular duo partner and I wanted to have something on the disc that demonstrated both solo and duo repertoire.

With Clemens we really explored both the complexities of both concertos, the two requiring sometimes very different approaches, but both allowing the dialogue between the soloists and orchestra to come through. We learnt so much together and had a lot of fun.

Recording this disc is a realisation of the many people who have supported me throughout my musical years. I am so grateful that this has been achieved.