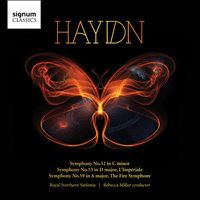 Rebecca Miller leads the Royal Northern Sinfonia in performances of three Haydn symphonies: the pugnacious Nos 59 (the 'Fire' symphony) and 52, and the rather more stately No 53 (written to grace the court of Prince Esterházy).

'[Rebecca Miller] brings her superlative energy to three symphonies by Haydn, which capture the full range of moods and emotions—from nobility to excitement' (Classic FM)» More

Many listeners have been daunted at the prospect of getting to grips with Joseph Haydn’s 104 symphonies—or more, since a number have been identified since Anthony van Hoboken published his landmark catalogue in 1957. All of them are individual and engaging, many of them masterpieces. It has not helped that Haydn’s work in general, and his symphonies and quartets in particular, were widely stigmatised until fairly recently as rather fey and genteel; Balakirev, the leader of Russia’s ‘mighty handful’ (the group of composers whose most celebrated members were Musorgsky, Borodin and Rimsky-Korsakov), described Haydn as “that genius of petty bourgeois music…which arouses a strong thirst for beer”.

Much more sympathetic and perceptive was the English composer Gustav Holst, a man very much ahead of his time who couldn’t imagine programming a student concert without a Haydn symphony. He compared what he considered typical characteristics of a Haydn symphony rather surprisingly with the novelist Thomas Hardy (whom he knew personally): “There was a wealth of experience of town and country, deep and controlled emotion, wisdom and humour, all clothed in perfect courtesy and kindliness.” The more robust performance style which has developed over the past 40 years or so means we can now appreciate all the more readily Haydn’s individual and surprising qualities.

Though often described as the ‘father of the symphony’, Haydn did not invent the form: rather, he took a budding genre which was already evolving in the mid-eighteenth century from various forms of the orchestral prelude: the operatic overture, and the sinfonia which typically preceded an oratorio were both equally ancestors of the first movement and finale of a typical eighteenth-century symphony. These dramatic forebears most plausibly explain the dramatic qualities of what have often been called Haydn’s Sturm und Drang (Storm and Stress) symphonies, a misleading label since Haydn composed those minor-key works—including the Trauer Symphony (No 44) and the Farewell Symphony (No 45)—well before the Sturm und Drang literary movement had started. Symphony No 52, composed in the early 1770s, has been identified as the last of Haydn’s symphonies in that dramatic style, and was described by the Haydn scholar H.C. Robbins Landon as the ‘grandfather’ of Beethoven’s dramatic Fifth Symphony (both works being in the key of C minor).

The opening movement—Allegro assai con brio—is one of the most dramatic and disconcerting that Haydn ever composed: just try predicting the phrase lengths or where the each cadence is going to fall! A calm and relatively graceful second subject offers some balm, though again with some unpredictable qualities to keep listeners on their toes. The second subject’s opening phrase deceptively launches the development section, before the music is hurled into turmoil by the resurgence of the first theme. The second movement Andante offers relative if uneasy calm. One may suspect Mozart had this movement in mind when he wrote his celebrated minor-key Symphony No 40 in 1788: like Haydn’s movement, his second starts in deceptive tranquillity, but become increasingly disquieted (quite unlike the slow movement of Beethoven’s Fifth). The third movement, again, anticipates Mozart in the brusque style and unpredictable strong beats of its opening and closing minuet, contrasted with a relatively courtly trio section. The Symphony ends with the relentless bustle of a Presto finale.

One can scarcely imagine a stronger contrast between this and Symphony No 53 in D major. Though it is not known which year Haydn composed this work, it was almost certainly about five years after the C minor Symphony, having in the meantime composed several other symphonies (Hoboken’s catalogue not being entirely rigorous in presenting the symphonies in chronological order) as well as composing operas and incidental music for the theatre of his employer, Prince Esterházy (Nicholas I). Haydn was already widely renowned around Europe for his music, and Symphony No 53 became the most popular of his symphonies before he ventured into composing for a wider public in Paris and London: Symphony No 53 has survived in various forms with at least two alternative finales (with two further alternative finales almost certainly not by Haydn), both of these recorded here.

The D major Symphony’s ceremonial start implies a more stately work to grace Esterházy’s palace. In contrast to the dramatic contrasts and surprises of Symphony No 52, its character is unhurried, with a slower rate of harmonic change even in the main Vivace section of the opening movement. With the Andante second movement we perhaps hear something of what Holst meant by “a wealth of experience of town and country”: we hear two charming themes, one in A major which may possibly be related to a French folk theme and certainly was widely circulated in various arrangements; then a second in A minor. These are both subject to variations through the movement. With the Minuet we return to the home key of D, the music straightforward and offering relatively few surprises compared to the minuet of the C minor Symphony. The final movement in the surviving Esterházy orchestral parts of Symphony No 53 is headed “Finale. Capriccio”: much of it is presented in the form of a statement played softly (piano) answered by a forte balancing statement, the movement ending in a lively and literally striking manner with a solo spot for the timpanist. The alternative finale, marked simply Presto, is more often found in old manuscript copies of the symphony and is a more obviously lively piece, a reworking of an overture with some differences in the scoring from the rest of the Symphony—notably divided bassoon parts, and originally no flute and timpani parts (added by Robbins Landon for modern publication).

Though numbered No 59, Haydn’s Symphony in A major was in fact written earlier than the other two symphonies on this album, being completed before 1769. How it came to be named the Feuersymphonie (Fire Symphony) is uncertain: it has been speculated that the music was subsequently used in a production of the play Der Feuersbrunst by Gustav Friedrich Wilhelm Großmann, performed at Esterháza Palace sometime in the 1770s. In any case, the vigorous opening movement sounds remarkably akin to the concerto style of Vivaldi, with Haydn’s individuality less evident than in the other two symphonies; that is, until it reaches a dramatic pause which was to become typical of Haydn’s work, reappearing in later symphonies such as the Drumroll (No 103). The following slow movement offers lyrical respite, initially played solely by strings but eventually joined by oboes and horns. The minuet includes a trio section lightly and intriguingly scored for strings only, which is hypnotically focused on twining first and second violins. The finale is launched by a horn call, an effect Haydn used again in the Drumroll Symphony; though here Haydn regularly punctuates the movement with horn calls, giving the Symphony a festive as well as lively end.