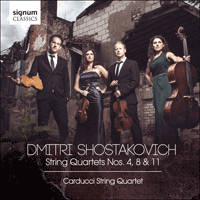 Shostakovich’s fifteen string quartets are collectively a major landmark of modern string quartet repertory, No 8 in particular being recognized as a powerful masterpiece. This album marks the start of the Carducci’s Shostakovich 15 project, for which they will be performing complete cycles of the Shostakovich quartets around the world to mark the 40th anniversary of the composer’s death.

Described by The Strad as presenting 'a masterclass in unanimity of musical purpose, in which severity could melt seamlessly into charm, and drama into geniality', the Carducci Quartet is recognized as one of today’s most successful string quartets.

'All central to the repertoire irrespective of other associations, these works nevertheless make powerful extramusical statements. The Fourth (1949) embraces Jewish inflections in the face of rising Soviet anti-semitism; the Eighth (1960), a reflection on the Dresden bombing, is also a disillusioned Shostakovich's memorial to himself; and the 11th (1966) touchingly memorialises Vasily Shirinsky, violinist of the Beethoven Quartet. The performances are both polished and passionate' (The Sunday Times)

Shostakovich’s 15 string quartets are collectively a major landmark of modern string quartet repertory, the Eighth Quartet in particular recognised as a powerful masterpiece which has been often performed and recorded. Yet it was with a very modest work, the by turns serene and playful String Quartet in C major, that Shostakovich started composing his cycle in July 1938, just months after his Fifth Symphony had been premiered in Leningrad and Moscow. The overwhelming public response to that Symphony almost certainly saved Shostakovich from the „bad end” threatened by the notorious Pravda editorial (unsigned and so effectively an official Soviet statement) “Muddle instead of Music”, which had lambasted his opera Lady Macbeth of the Mtsensk District. Though the Fifth Symphony was eventually given the semi-official subtitle “an artist’s creative reply to justified criticism”, many of its audience recognised, tacitly with tears, that the slow movement’s lament was at the very least a response to the fate of all those, including several of Shostakovich’s friends and colleagues, who had disappeared, arrested by the state police, during the era of Stalin’s Great Terror. After such a public and cathartic experience, it seems that Shostakovich turned to the string quartet medium partly to find a more private and intimate forum for his music. However, in the unforgiving light of adversity—not least, the trauma of Germany’s brutal invasion of the Soviet Union in the 1940s—Shostakovich found it impossible to jump away from his own shadow, and his wry response to his circumstances would increasingly find their place in what became his major cycle of 15 completed string quartets.

After the Second World War, Shostakovich suffered a second official crack-down on his work: the notorious Zhdanov decree against ‘formalism’ in 1948 resulted, among other things, in Shostakovich’s dismissal from his teaching post at the Moscow Conservatory. As part of his penance for his alleged formalist crimes (that is, for his wilful artistic independence), Shostakovich was sent to the States as part of a Soviet cultural mission,during which he was obliged to publicly condemn all experimentation in music. On his return, in April 1949 he began composing his String Quartet No 4 in D major, completing it on 27 December that year. He dedicated it to the memory of his close friend, the artist and theatre designer Pyotr Villyams—so far, so innocuous; nonetheless Shostakovich had to consign this and several other works, including his First Violin Concerto, literally to a drawer to await a more favourable time for more individual and challenging works to be performed.

Looking at the score, the Fourth Quartet appears a relatively simple and straight-forward work: three apparently light Allegretto movements and an Andantino slow movement. Indeed, the Quartet starts with a kind of mock innocence, its bare fifths and crudely simple harmonic language suggesting something pastoral—reflecting, perhaps, Socialist Realist art’s typical celebration of rural Russia and her folk traditions. Yet increasingly sour notes are sounded, suggesting all is not well with this studied simplicity. After this relatively brief Allegretto follows a beautiful slow movement—gentle and almost consoling at first in character, but curdling as it touches a deeper expressive vein; the lead violin rises in keening lament, drawing its colleagues into a higher tessitura, before the music subsides into noble resignation. The next movement is a furtive scherzo, its nervous bustling and scampering suggesting the preparation of a major event. This leads without a break into the finale where, heralded with the pomp of resonant pizzicato chords, a theme of a patently Jewish character takes centre stage. Shostakovich had already made use of Jewish themes in several previous works including his Second Quartet. But using such a theme in 1949 was controversial in Stalinist Russia, since among official circles anti-Semitism was on the rise and was to reach its culmination in the so-called Doctor’s Plot.. Shostakovich, as a close friend of the Jewish refugee composer Mieczysław Wajnberg (Russified into Moisey Vainberg, or Weinberg), was aware of this rising tide, and as a gesture of empathy with this persecuted minority, created several works—including the First Violin Concerto, and most overtly in the song cycle From Jewish Poetry—in which he made quotation or allusion to their music, once explaining: “Jews were tormented for so long that they learned to hide their despair. They express despair in dance music.”

Shostakovich’s most celebrated quartet, No 8 in C minor, was composed some eleven years later, well after Stalin’s death. Yet Shostakovich was at something of a low emotional point when he composed the work: his first wife, Nina, had died in 1954, followed late in 1955 by the death of his mother, leaving him a single father in charge of two spirited children on the verge of young adulthood. All too hastily if understandably he had remarried, disastrously, leading to divorce within three years. Meanwhile, with Prokofiev—once his only serious rival as the Soviet Union’s leading composer—having died in 1953 (apparently on the same day as Stalin), Shostakovich was regarded as the leading composer of his generation, and his every move was watched with interest by both the cultural authorities and his peers. Not surprisingly, Shostakovich was soon under pressure to join the Communist Party; he finally did so after some pressure from Khrushchev himself. Family and close friends soon saw that Shostakovich was beside himself with despair and self-hatred for this capitulation. Asked to score a film on the bombing of Dresden, Five Days and Five Nights, he then spent time in the East German city in preparation: while there he composed his Eighth Quartet. Perhaps inevitably, the Quartet was subsequently presented as Shostakovich’s horrified reaction to the wartime destruction by the allies of that city; but writing to his friend, Isaak Glikman, Shostakovich explained: “When I die, it’s hardly likely that someone will write a quartet dedicated to my memory. So I decided to write it myself.” He himself identified several quotations in the Quartet, signifying its autobiographical nature, as being taken from key works from throughout his career, including his First, Eighth and Tenth Symphonies, the Piano Trio, the First Cello Concerto and Lady Macbeth. He even intimated to another friend, Lev Lebedinsky, that the work was intended as a kind of suicide note (prompting Lebedinsky to keep a close watch on his friend until the crisis had passed). In any event, the Eighth Quartet is one of Shostakovich’s most powerful creations, and for all its quotations we may agree with its author in his “wonder at [its] marvellous unity of form”.

Fortunately for Shostakovich, sometime in 1961 he met the 27-year-old Irina Supinskaya who worked as a literary editor in the publishing house Sovietsky Kompozitor. Although she was already married, Shostakovich was determined that she was to be his next wife. This time, despite the age difference of about 30 years, it proved a fortuitous choice as she turned out to be both utterly devoted and tactful in handling an increasingly physically frail man. The Eleventh Quartet is one of Shostakovich’s first works to hint at what was to become his increasing preoccupation with mortality and death. It was composed in 1966 as a memorial to Vasily Shirinsky, second violinist to the Beethoven Quartet, the ensemble responsible for giving the premiere of all Shostakovich’s quartets to date (with the exception of Quartet No 1). Shirinsky, who died in 1965, was not only a colleague but personally devoted to Shostakovich’s music, editing his first ten quartets for publication. String Quartet No 11 is in F minor, a key already much associated with death and grieving (for instance, in Mendelssohn’s extraordinary final String Quartet, Op 80, written after the death of his beloved sister Fanny); it is in the form of seven short movements, said to reflect the different characteristics of Shirinsky’s playing. It seems possible, too, that Shostakovich took some inspiration from Britten, whom he first met in 1960 on a visit to London and with whom he formed a unique friendship—the only such friendship he formed with a foreign composer. In Britten’s song cycle for soprano and strings, Les illuminations, there is a similar succession of short, contrasting movements of vividly sketched character. If Shostakovich took inspiration from this phantasmagorical source, this would have been in line with his known admiration for Britten’s War Requiem, which was similarly to inspire such works as Shostakovich’s Fourteenth Symphony.