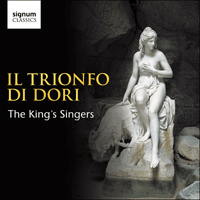 The Italian madrigal collection Il Trionfo di Dori began life as a simple love story. Venetian nobleman Leonardo Sanudo commissioned twenty-nine poems, each from a different poet, and each to end with the line 'Viva la bella Dori' (the sea-nymph representing his beloved wife Elisabetta). He then approached twenty-nine composers, among them the greatest names of the day. Add to the resulting publication six King's Singers and we have a recording to treasure.

'The King’s Singers are on top form, singing with a sunny freshness appropriate to this happy music, blending beautifully, and moving as one into crescendos and decrescendos, ranging in dynamic from a whispering pianissimo to declamatory episodes of high drama' (Early Music Review)» More

'The King’s Singers bring this great monument of Italian music history to striding life. Their irresistible interpretations arise from the richness of the collection’s verse, the words and expressive energy of which register here with ringing clarity' (Sinfini Music)» More

The madrigal, that most polished form of secular choral music, first emerged in Italy in the 1530s, supplanting a rather more unsophisticated repertoire of secular songs. Italian madrigal composers were soon vying with one another to express the meaning of the text as fully as possible through their music. Most madrigals spoke of love and mythology, reflecting the most popular themes of Renaissance culture, and these themes are to the fore in the collection of madrigals first published by the Venetian music printer Angelo Gardano (1540–1611) in 1592 under the title Il Trionfo di Dori.

The collection was dedicated to Leonardo Sanudo (1544–1607), a nobleman from one of Venice’s oldest and most respected families. It is thought that the madrigals were composed in honour of Sanudo’s wife, Elisabetta Giustinian, either at the time of their wedding in 1577, or as a later commemoration of that event. Sanudo, who commissioned the poems first, later having them set to music, worked closely with Gardano to make the collection available to a wider audience. The surviving correspondence of Gardano gives great credit to Sanudo for his zeal as a patron of the arts; as he writes, Sanudo “assiduously for a number of years commissioned the poetry and caused to be beautifully composed the following excellent madrigals from a number of very famous composers.”

The madrigals extol the virtues of Sanudo’s wife, through the alter ego of the sea-nymph, Dori, the daughter of Oceanus, the divine personification of the sea from mythology. The texts paint an idyllic Arcadian scene, inhabited by nymphs, shepherds and satyrs, who all join together at the end of each madrigal to sing the praises of Dori, with the refrain Viva la bella Dori (Long live beautiful Dori).

Il Trionfo di Dori remained popular throughout the late 16th and early 17th centuries with seven print runs, and the influence of the collection was felt around Europe. Croce’s Ove tra l’herbe e fiori was included in Nicholas Yonge’s second collection of Italian madrigals (Musica Transalpina: the Seconde Book of Madrigalls—1597). This work inspired Thomas Morley to write Hard by a crystal fountain, one of the 25 works by 23 composers in The Triumphs of Oriana, compiled by Morley in 1601 to honour Queen Elizabeth the First. Mirroring Il Trionfo each of the madrigals in the collection ends with the refrain “Long live fair Oriana”. In today’s litigious world, such plagiarism would be dealt with by lawyers and courts, but in the Renaissance such imitation was viewed more favourably, with the parody seen as a strong form of flattery. What is true in the case of Il Trionfo di Dori is that this was a collection worth imitating.