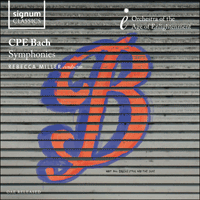 Orchestra of the Age of Enlightenment, Rebecca Miller (conductor)

CPE Bach: a trailblazer, whose music is bright and effervescent, constantly shifting and wrong-footing the listener with wild changes of colour and direction. And yet CPE Bach is these days almost entirely eclipsed by his father, Johann Sebastian. In this recording Rebecca Miller conducts the Orchestra of the Age of Enlightenment, breathing new life into the work of this forgotten pioneer.

'These energetic committed performances of five symphonies dating from between 1757—when Haydn was first writing in the genre—and 1780 show the period band has lost none of its verve and enthusiasm for this strange, dramatic music from the dawn of the 'classical' era' (The Sunday Times)» More

Imagine for a moment that Haydn and Mozart never existed—it could easily have been so. Who then would we remember today as the major musical figures of the second half of the eighteenth century? In opera, Gluck, certainly, plus maybe a selection from Salieri, Cimarosa, Cherubini, Paisiello, Piccinni, Hasse and Jommelli. In church music the picture would be even less clear than that. In instrumental music, however, and in particular in orchestral and solo keyboard composition, one figure would surely not only dominate the field, but be seen as a crucial figure linking the expression of the late baroque to that of Beethoven. His name was Bach.

Carl Philipp Emanuel, the second son of Johann Sebastian Bach, was born on 8 March 1714 in Weimar, where his father was a court musician. As a boy he followed Sebastian’s career moves to Cöthen and Leipzig, where from 1723 he was a student at the Thomasschule and enjoyed the unmatchable private musical education made possible by his family situation. Although he subsequently studied law, he was clearly bound for a career in music, and in 1740 obtained a post as harpsichordist at the court of Frederick the Great in Berlin. He remained there for 28 years, during which he suffered considerable frustration; his principal duty was to accompany the king’s performances on the flute, and, though he composed prolifically and in 1753 published one of the century’s most important musical treatises (the Essay on the True Art of Playing Keyboard Instruments, a book which Beethoven, among others, would recommend to his pupils), he was far from being the senior musical figure at court. Securing release proved difficult, however, and it was only when the death of his godfather Georg Philipp Telemann vacated the position of Kantor in Hamburg that he was finally able to move in 1768.

In Hamburg his job was to organize the music at the five principal churches, but he also quickly rose to a position of prominence in the city’s concert life as a promoter, composer (his Hamburg works include a number of unjustly neglected oratorios), and keyboard performer. These were the years of his richest professional fulfilment, a time when his international reputation reached its greatest heights and when he mixed with a sophisticated circle of writers and intellectuals. Following his death in December 1788, a Hamburg newspaper lamented that ‘music loses in him one of its greatest ornaments, and to musicians the name of Carl Philipp Emanuel Bach will always be a holy one.’

Sinfonia in E flat major H654 Wq179
Around 20 symphonies by Bach are known, equally divided between his Berlin and Hamburg periods. This E flat Symphony was composed in 1757, making it contemporary with Haydn’s earliest known compositions. Nothing the young Austrian was writing at that time, however, could have competed with the ebullient energy that bursts upon us in Bach’s opening Prestissimo, and it is doubtful if he would ever feel entirely at home with the bold gestural and dynamic contrasts that are deployed so freely here. And although the finale has an unexpectedly conventional ‘hunting’ flavour, the slow movement is another gem, its highly charged lyricism periodically interrupted by stabs of pain.

Sinfonie in B minor H661 Wq182/5
Recalling his pre-Hamburg symphonies in a short autobiography in 1773, Bach wrote that ‘because I have had to compose most of my works for specific individuals and for the public, I have always been more restrained in them than in the few pieces that I have written mainly for myself.’ How delighted he must have been, then, when that same year he received a commission from Baron Gottfried Van Swieten, the music-loving Austrian Ambassador to Berlin who was later to be such a creatively influential supporter of Haydn and Mozart, for a set of six new string symphonies in which he was urged to give his imagination free reign ‘without regard to the difficulties of execution’.

Van Swieten would have known that the result would be symphonies in the fervently emotional and unpredictable style cultivated at that time by composers in northern Germany and known as Empfindsamkeit (roughly translating as ‘ultra-sensitive’), a style in which Bach had already shown notable mastery in his solo keyboard works; and he would probably have expected it to be further enlivened by the turbulent, mainly minor-key spirit of Sturm und Drang (‘storm and stress’) that was at this time affecting composers in many parts of Europe, most memorably Haydn. But even Van Swieten must have been amazed by the vivid originality of Bach’s response. Here are the nervy extremes of expression—thrust at us in affecting melodies, angular lines, jarring key-changes, febrile dynamic contrasts and lurching changes of direction—that mark Bach out as a composer of urgent individuality. Symphony No 5 starts out with a melody which is somehow both elegant and tense, and further underminings by scrabbling unison lines and threatening full-orchestral chords ensure that the mood never feels entirely comfortable. The second movement breaks in unexpectedly to bring a more settled melancholy, but this is soon swept aside as the finale pitches headlong into further agitation.

Sinfonie in A major H660 Wq182/4
Bach was evidently well aware that the six symphonies for Van Swieten were of a boldness not even he had attempted before, because before sending them off to his patron he decided that it would be a good idea to audition them before a circle of friends and admirers in Hamburg. In 1814 an article in a music journal by the poet Klopstock recalled the occasion: ‘Reichardt led from his violin, to the great relief of the anxious composer. Although they were not played wholly accurately, one could hear with delight the original, daring flow of ideas and the great variety and novelty in the forms and modulations … seldom has a highly gifted mind poured out music of such superior, peculiar and high-spirited character.’

Symphony No 4 opens with a dramatic descent from quietly chattering high violins to a sonorous full orchestral texture, and goes on to make that contrast a feature of the entire first movement, adding the occasional emotional twist of a short sighing violin figure. Strong dynamic contrasts likewise help shape the dark and restless middle movement, but the finale offers a brighter prospect, suddenly jubilant and celebratory in tone.

Orchester-Sinfonie in D major H663 Wq183/1
Bach composed four more symphonies during his years in Hamburg, and although they are less well-known today than the earlier set, they are if anything even more extraordinary. Certainly they are more imposing: published in Leipzig in 1780 and dedicated to Friedrich Wilhelm, Crown Prince of Prussia, they bore the title ‘Orchestra-Symphonies’ and were scored for an ensemble of strings, pairs of horns, flutes and oboes, and bassoon—a fuller and more colourful palette which Bach exploited with relish.

The first of the symphonies, in D major, has a dramatic opening which recalls that of Wq182/4, but now amplified into a carefully staged, mighty crescendo. It is hard not to think of Beethoven in this busy movement, not just in its powerful sonorities but also in the way Bach seems to be constantly on the lookout for ways to avoid the obvious—for instance the way in which the last note or chord of one episode might be replaced by first of the next. Even Beethoven, however, would have had difficulty in contemplating the bridge passage which leads to the central slow movement, arriving there in the surprise key of E flat major. This movement is brief, a snapshot of some warmly serene Gluckian operatic scene, and the symphony ends with a finale whose joyful progress is repeatedly interrupted by mysterious, winding questions from the strings.

Orchester-Sinfonie in F major H665 Wq183/3
The third of the ‘Orchestra-Symphonies’ features yet another gripping opening, with Bach again seeming to capture music from the air. A second theme is announced by the winds with accompanimental wisps from the strings, but the course of the movement as a whole is halting and restless in its colouring and constant changes of direction, so that it really is hard to guess what will come next. A slow-moving bridge passage leads to the middle movement, an unusual one in binary form in which each half is heard first as a duet for viola and cello, and then picked up by the full strings and woodwind. After this the finale is a witty juxtaposition of galant send-off and faintly rustic gigue.