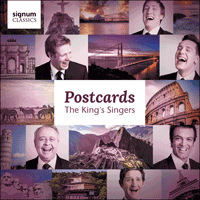 The King’s Singers explore the folksongs and melodies of the world in a new programme entitled Postcards. In their own words: “In our travels we have amassed a wonderful collection of folksongs and popular songs from numerous countries, many of which we use as encores when we visit. The influences and sources are extraordinarily far-ranging, and each song has its own local characteristics. To celebrate the diversity of music that we perform and the numerous countries we visit each concert season, we have recorded an album of some of our favourite folksongs from around the world.”

'Typically immaculate performances of songs collected by the King's Singers on their global travels, and used as encores. Velvet vocal blending is a given, and mellifluous arrangements' (BBC Music Magazine)

'The King's Singers explore folk songs and melodies of the world in a collection of music from countries far and wide, ranging from Australian folksongs to traditional Brazilian choro (lamentation) music and Hungarian choral pieces. Designed to engage fans from all corners of the globe, people are encouraged to post musical memories, photos and videos onto a specially interactive map: http://kspostcards.com' (The Northern Echo)

In our travels we have amassed a collection of folksongs and popular songs from numerous countries, many of which we use as encores each time we visit. Too many of these songs sit in our library until we return, so we decided to put together this selection of musical Postcards from around the world. In many cases the choice of songs has been very difficult to make, given the tremendous wealth of material. The influences and sources are extraordinarily far-ranging, and each song has its own local characteristics. This has made the selection process somewhat arbitrary, but these songs represent our own personal favourites, which we hope you will also love. The tracks on the album will lead you on a tour of all the main territories that we regularly visit, from The Americas to Australasia, via Europe, Africa and Asia.

Feller from Fortune
A traditional song from the Canadian province of Newfoundland which tells of a young fisherman who travels to Bonavista Bay to do a spot of fishing. Whilst there he meets a young lady called Sally. They smile at each other in church, and one thing leads to another, so that when he returns the following year, she has a little surprise for him.

Le baylère
This song comes from a set of five arrangements of folksongs from the Auvergne region of South-west France. In the song two shepherds call to each other across a valley to say that all is well, and they can sleep in peace. Le baylère is best known in the version by Joseph Canteloube, from his Chants d’Auvergne.

Arrirang
A well-loved folksong which describes a journey through a pass in the mountains of Korea. It is unclear exactly where this pass is, but the song has become an un-official extra national anthem for the country.

Pōkarekare ana
This Māori love song was written just before the First World War while soldiers were training north of Auckland, New Zealand. It speaks of the yearning for home that soldiers experience, and the lyrics have remained almost completely unchanged since then, proving its long-lasting appeal. This lovely version by Keith Roberts was written for our trip to New Zealand in 2012.

The oak and the ash
A traditional English ballad from the seventh century, it is said to have been printed first in a kind of early newspaper, a broadsheet. The text tells the story of a young girl who moved to London from the ‘North Country’ and is homesick for the familiarity of her life there. This beautiful arrangement by Gordon Langford dates back to the early days of The King’s Singers.

Nel blu dipinto di blu 'Volare'
This Italian song, the title means ‘In the sky, painted blue’, was written by Franco Migliacci and Domenico Modugno and won third place in the 1958 Eurovision. The song was written after a vivid drunken dream by Migliacci placed colourful images in his mind. Perhaps better known as Volare, this song has been covered by many singers, including Frank Sinatra, Louis Armstrong and Dean Martin.

Tuoll' on mun kultani
‘Tuoll is my sweetheart’ is a simple Finnish love song that tells of a man’s feelings of yearning for his beloved. The text comes from the extensive collection of Finnish folk poetry called Kanteletar, which has been a great inspiration to many composers, most notably Jean Sibelius.

Botany Bay
This song is thought to have been written by members of The Gaiety Theatre Company in London and Brisbane. The song describes the transport of British convicts across to Australia via ship and the awful conditions encountered. We had this song arranged for our trip to Australia in 2012.

Pasional
A passionate song by the Ecuadorean composer and violinist Enrique Espín Yépez, arranged for us by Miguel for our trip to Ecuador’s beautiful capital city Quito in 2013. The song tells of a man’s infatuation with a beautiful woman. Sadly his love is not reciprocated.

Tico tico no fubá
This renowned Brazilian choro piece was popularized by the performance of Carmen Miranda in the film Copacabana in 1947. The lyrics describe the cooing of the tico-tico bird and the wooing of women. We loved singing this for the audience at our concert in Rio de Janeiro in 2013 during our debut visit to the wonderful country of Brazil.

Es dunkelt schon in der Heide
A traditional hunting song in the German style, which likens the excitement and frustration of hunting to the successes and failures of love. This is a long-standing King’s Singers favourite arranged by Gordon Langford.

The star of the County Down
This traditional Irish ballad is set near the town of Banbridge in County Down. It tells the story of a young man who meets a pretty girl ‘the star of County Down’ and imagines their courtship and eventual marriage.

My love is like a red, red rose
The Scot poet Robert Burns devoted the last decade of his life to preserving Scottish culture, and this song was written as he walked the country in 1794. The text is written in a traditional Scottish lilt, and the melody is simple and traditional. This is another longstanding King’s Singers favourite, in this version written by our founding baritone Simon Carrington.

Jeg gik mig ud en sommerdag
This lovely Danish tune from the 1600s was given this text in 1847 by NFS Grundtvig, which philosophised an earlier version of the song. The poet describes the beauty of the Danish country, and says that no song is as sweet as one sung in Danish. Grundtvig has been very influential in the formulation of the modern Danish national conscience.

El vito
El vito is a traditional Andalusian folksong thought to originate from the sixteenth century. This lively dance was one of the arrangements written specially for this album, and Miguel Esteban’s wonderful arrangement captures the excitement of this bolero-esque dance.

Contigo aprendí
The musician Armando Manzanero Canché is considered to be Mexico’s foremost romantic post-war composer. This popular love song is typical of his huge output of songs, which have been performed by singers around the world, and particularly throughout North and South America.

Zai na yao yuan de di fang
Wang Luobin, an ethnomusicologist, wrote this melody after becoming inspired when he heard a Kazakh folk tune in 1938. This song, which speaks of the separation of a young couple, is one of the most well-known Chinese folksongs.

Suo Gan
First recorded in print around 1800, Suo Gan is a traditional Welsh lullaby. The text evokes images of slumbering children and murmuring waves on the shore, matched here by the tranquil arrangement of Robert Rice.

Egoli
'Egoli' is the Zulu name for the South African city Johannesburg, and translates as 'city of gold'. The song describes life in the city, with both its joys and hardships. 'Egoli' is one of six songs from a set entitled Lalela Zulu.

Little David, play on your harp
The wonderful tradition of the American spiritual is loved the world over, and we certainly get a great reaction when we sing Keith Roberts’ fantastic arrangement of this lively spiritual.

Esti dal
Esti dal translates as ‘Evening Song’ and is Kodály’s most famous choral work. A young soldier fighting for the Austro-Hungarian Empire prays to God for shelter and safe-keeping through the night.

Mein kleiner grüner Kaktus
‘My little green cactus’ is a comedic song first performed by The Comedian Harmonists, the great German harmony group of the 1920s and 1930s. This has often ended our concerts in German speaking countries, and we are delighted to include it here to round off our collection of Postcards from around the world.