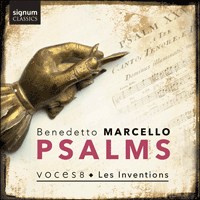 Voces 8 and Les Inventions shine a light on a hidden musical treasure in these premiere recordings of Charles Avison’s 1757 adaptation of Benedetto Marcello’s Estro-poetico armonico. A fresh and original collection, Marcello’s Psalm settings were published between 1724 and 1726 and quickly found fame across Europe. 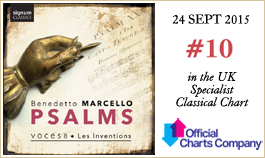 'This disc underlines the quality of Marcello's compositions, and should raise interest in his 'Estro poetico armonico'' (MusicWeb International)» More

Had Antonio Vivaldi not shot to fame when he was rediscovered at the beginning of the 20th century, we would undoubtedly be more familiar with the name of Benedetto Marcello. For Marcello’s reputation—unlike Vivaldi’s—did not wane during his own lifetime, and he enjoyed an international reputation which was to last for more than 250 years. He was born in 1686 into a prominent and respected Venetian family, and pursued a career in law which led him to occupy several major positions in the government of the Republic. He did not, however, allow his public duties to keep him away from his pursuit of music, which he had studied under both Lotti and Gasparini and which he continued actively to cultivate as a nobile dilettante. Marcello’s works, and particularly his Psalm settings, were to exert a major influence on the musical culture of Italy and of other European countries throughout the whole of the 18th century and even into the 19th. The German lexicographer Ernst Ludwig Gerber wrote in 1790: ‘Because of the power and justness of his expression, he was called the Michelangelo of music.’

Marcello’s magnum opus is his Estro poetico-armonico. This work, which was published between 1724 and 1726, is a setting of the first fifty Psalms of David as paraphrased into Italian by the poet Girolamo Ascanio Giustiniani. In addition to the subtle deployment of vocal resources, and his imaginative use of musical techniques to illustrate the texts, Marcello brought to these Psalms a peculiar quality of freshness and originality which unquestionably contributed to their becoming a major international success. The extent of this success is demonstrated by the work’s rapid translation into many other languages including French, German, Swedish, English, and Russian, as well as by the enthusiasm with which these settings were embraced by performers of a variety of religious traditions including Anglican, Lutheran, and Jewish.

Congratulatory letters from illustrious musicians such as Telemann, Bononcini, Conti and Gasparini, poured from all sides. The music theorist Johann Mattheson wrote:

The Experience, not of a private Academy, but of a numerous Concourse of all the Virtuosi and Lovers of Music in this populous City, gives the fullest Testimony of their Truth. In fine, Sir, I have had the Honour to represent to the Public a performance of Part of your exquisite Composition in our Cathedral, having adapted it to Words of the German Language; the sole Merit of which was, that the Beauty of the Original of his Excellency Signor Giustiniani was not greatly diminished.
(Hamburg, 6 October 1725)

In 1757, the organist, composer and music critic Charles Avison, assisted by his colleague John Garth, published in London a version of Marcello’s Estro in English, selections of which are recorded here for the first time. In the preface, Avison wrote:

In adapting Marcello’s psalms to the English version, I have followed the Original … and endeavored to preserve each particular Design on this Work, by strictly adhering to every Change of Sentiment and Passion, and by adapting the Melody and Expression of MARCELLO’s Music, to the Construction and Prosody of the English Language … I flatter myself it will appear that the Spirit of our sublime and expressive Psalms is every where preserved in these inimitable Compositions; and that therefore, they will be considered as proper Performances for the Service of our Cathedrals, for which Purpose chiefly they are adapted to the English Version: And that they will now not only prove useful on this Account, but also give great Pleasure to Lovers of Music in general, I have been encouraged to hope from the Approbation of many Judges who have perused them in Manuscript.

Throughout this colossal enterprise, Marcello explores all combinations of the four voices—soprano, alto, tenor and bass—deploying them in various arrangements, both as soli and tutti. Due to the fact that women had not been permitted to sing in the Temple, he favored low, mainly male, voices. The oldest Sephardic community in Italy had in fact been established in Venice during the 16th century, and it is interesting to note that some of the works, such as Psalms 11 and 16, incorporate sections based on quotations from Hebrew psalmody. The vocal texture is supported by a simple figured bass. This has no specific instrumentation and we have opted for diversity, using harp, theorbo, organ, cello and double-bass. Occasionally, an obligato instrument (cello or viola) is required.

Gerber (quoted above) describes Marcello’s music as ‘serving entirely the poetry, with theme, pace, tempo and modulation changing as often as a new idea occurs in the text’. Throughout the work we see the deliberate use of compositional procedures which draw the listener’s attention to the text, and the deployment of expressive musical gestures which underscore the varying emotions of the psalms. These range from the abundant and rapidly contrasting musical effects of Psalm 11 to the sustained meditative phrases of Psalm 32. Differing national values coloured the perceptions of Marcello’s music: the English revered its ‘harmony’, and the Germans its ‘melody’, whilst the Italians themselves esteemed its ‘counterpoint’— which has prompted us to include in this recording the 6-part infinite canon found at the end of the work.

The charming inventiveness, noble simplicity, and poetic timelessness of Marcello’s Psalms made them a landmark in European music, and we hope that this first recording of a selection of Charles Avison’s version of 1757 will serve to confirm Marcello’s importance as a composer, and draw attention to his significant contribution to cultural and musical history.