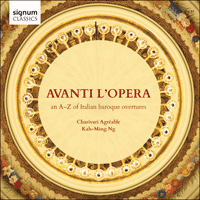 Early-music pioneers Charivari Agréable perform an engaging collection of overtures from the Italian Baroque Opera, best described by Kah-Ming Ng as being 'lucidly crafted for the purpose of turning heads'. In a decadent era when the antics of theatre-goers was often as intriguing as the performances taking place on stage, these works were composed with the express intention of thrilling, beguiling and engaging an often hard-to-impress audience.

'All in all, this disc is full of insight and revelation, and to be highly recommended' (Early Music Review)» More
'A sense of sheer delight that brings these enticing scores resplendently to life' (International Record Review)» More

Of all the noises known to man, opera is the most expensive. (Molière)

Before ringing up the curtain
Just as the modern Olympics are not merely about sports, baroque opera was never only about music. Codified in the Olympic Charter is a belief system which promotes peace, health, cultural exchange, anti-discrimination, the environment, and other such lofty ideals, variously subsumed into political and national agendas. Similarly, early opera, for its devotees, was arguably a philosophy of life in which personal expression was articulated against a backdrop of music, drama, dance, and scenography. And, like the IOC’s commitment to future legacy, some opera houses have historically been required by statutes to promote philanthropy, via alms to orphanages and workhouses.

Despite such financial chains, both forms of pubic spectacle thrive because of the emblematic commercial opportunities afforded (and provided by) the sponsors. As the productions rode their respective waves of public approbation, organizers and impresarios fine-tuned the ticket prices in the same manner as the differential pricing of today’s airlines. Like business and first class seats, boxes taken up by subscribers form the bulwark on which rests the financial viability of a flight or theatrical venture.

But, in addition, baroque theatre was an interactive event. Even before the birth of opera, the stage as a metaphor for life had been mooted by many, including William Shakespeare in Act 2 Scene VII of As you like it: ‘All the world’s a stage, and all the men and women merely players’. Theatricality, as a way of life, percolated from the top. Louis XIV’s public ablutions, ritualized with elaborate ceremony in the lever and coucher du roi, were means by which his nobles could be manipulated and subjugated by the granting of such favours as a mere mention or glance, or even an invitation to dress or undress the king.

And so the theatregoer—encouraged by the bright auditorium and emboldened by pre-dinner drinks—participates in the theatrical amusement park by creating an alternative stage on which is realized his social need for seeing and being seen. This parallel world represents the pre-eminent open space for maximum public visibility, acting as a barometer of power, an epicentre of gossip, and a hotbed of intrigue. Traversing the dimly-lit streets that lead to the theatre, he steps into an arena in which the boundary between performer and audience is permeable. With neither concept of dimming the auditorium nor that of respectful quiet listening yet to evolve, the spectator-turned-critic could choose to embrace opera’s capacity to lift its listener beyond mere pleasure-giving into the realms of life-affirming ecstasy, as the performers move his emotions and transport his spirit into another dimension. Or he could also revel in disapprobation and exhibitionism.

Although the upper-economic social strata mostly supplied the bulk of opera audiences, other demographics had their roles to play. As the polymath composer Johann Mattheson observed in 1728, ‘operas are more for kings and princes, than for merchants and tradesmen’ (Opern sind mehr für Könige und Fürsten, als für Kauff- und Handelsleute). Royal interest fluctuated, although going to a theatrical production was an astute way of sparing the treasury of the immense cost of court entertainment, unless one had to be mounted lavishly at court to impress a visiting prince. The courtiers (when granted dispensation to be seated in the royal box in the absence of the sovereign) and the aristocracy were an extension of the monarchy, and were habitués of the boxes.

Also belonging to this beau monde were the ambassadors, functionaries, and important ‘men of affairs’. Others, who ‘perforce richly ornament’ the theatre, included the professionals, military, clergy, rich tourists, and the burgeoning wealthy mercantile class. And then there was the rowdy rabble: the unauthorized freeloaders, unsavoury seat-warmers (viz. pages and lackeys saving the seats for their masters and mistresses), short-changing pedlars (of snacks, beverages, and libretto booklets with the option of a candle side-order), and disruptive latecomers.

To this last category may well belong the wits, fops, punks, bullies, squires and high-class prostitutes. These were the fashionable set who took to preening themselves in their conspicuously fine attire while flaunting their luxurious accessories and outlandish props (of which the most ingenious was the small dog). Young gallants or petits marquis put on their own performances, making visits from box to box during the show, lobbing criticisms and interjecting witticisms at both performers and spectators, while flirting with the ladies who were either performing on stage or posing resplendently off stage.

Indeed, it was generally deemed unseemly to take much heed of the action on the stage. The true gentleman amateur and the aspiring debutante in the marriage market were expected to acquire social accomplishments. These were in music or other forms of learning or ability, but they must never progress beyond superficial familiarity. Treading outside the bounds of dilettantism would have risked comparison with wage earners, and thus the unbearable disdain of high society.

The theatre was not merely a place of diversion, but also of aspiration, especially for those seeking to adopt the mark of gentility or to avoid any taint of rusticity. Besides refining status hierarchies, the theatre was, above all, a place of assignation. It offered, as Henri Misson de Valbourg noted in 1719, licence for ‘Men of Quality, particularly the younger Sort, some Ladies of Reputation and Vertue, and an abundance of Damsels that hunt for Prey, [to] sit all together Higgledypiggledy, chatter, toy, play, hear, hear not.’

The misbehaviour of the spectators was aided by the custom of allowing them onto the stage in unfeasibly large numbers (dozens, even over a hundred), and abetted by the architecture of baroque theatres. In taking up the much pricier benches on the stage, these punters—ranging from petty nobility to ‘fools with more money than wit’—were aware of the notice paid to them, and duly reciprocated the attention of their fellow hogs of the limelight. Chandeliers, lanterns, oil lamps, and candles were maintained by the ‘snuffers’ at the same level of illumination throughout the entire performance. This extinguishing of the demarcation between stage and auditorium facilitated a form of chatty performative spectatorship. The exception to this was the distant (and dim) middle and upper galleries in which throng the citizen wives and daughters, journeymen, apprentices, footmen, coachmen, ‘disponding Mistresses and superannuated Poets’. Auditorium seats in the shadow of the galleries above were not only cheaper but a double-edged sword, as Samuel Pepys recorded in 1661: ‘And here, I sitting behind in a dark place, a lady spat backward upon me by a mistake, not seeing me. But after seeing her to be a very pretty lady, I was not troubled at it at all.’

The more expensive boxes were often located within the proscenium arch, and tended to be furnished with their own curtains, which bestowed the significance of a theatre within a theatre. The less expensive side boxes had a sightline disadvantage, so that inspecting each other across the auditorium was easier than looking at the stage. The orchestra, obscured from the public (i.e. the less well-off nonsubscribers), offered little distraction. Society hostesses, political allies on joint appearances, couples or families with additions or absences (thus fuelling rumours), dandies and their hangers-on, all compete to make their presence felt, collectively and inevitably forming an inextricable part of the evening’s attraction.

Back on stage basking in the gaze of all, ‘persons of rank’ or petits-maîtres disported themselves in tandem with the performance. They dazzled the populace, made their own random entrances and exits, impeded (sometimes even anticipated) the action, ruined the moment by shuffling and jostling, hindered the movements of the performers, while egging on each other as well as the rest of the house to converse aloud, cheer, discuss, laugh, taunt, hiss or even riot and stampede. Repeated royal ordinances to evict them from the stage to make way for the machinery, sets, and sundry mechanical effects often went unheeded. The rewards of premium pricing were a financial imperative. Jean-Baptiste Lully, hoping to diminish the lustre of stage seats, doubled their price, only to render them more exclusive and sought-after.

In the light of these goings-on, an opera can scarcely be said to begin with its overture. This musical signal ‘to gain the attention of the audience [by which] a sinfonia with several instruments is played’ was first indicated by Marco da Gagliano in his pastoral drama La Dafne (1608): per render attenti gli uditori, suonisi una Sinfonia composta di diversi istrumenti.

At first, any instrumental piece would have served the purpose. But by the mid-seventeenth century, an orchestral number entitled ‘sinfonia’—with the rubric ‘avanti l’opera’ or ‘avanti il prologo’—came to be written especially for the opera. In practice, such overtures remained interchangeable, even if the publication of the work effectively cemented the association of the sinfonia with its opera. There was, after all, no specific relationship between most operatic overtures and the works they introduced, mirroring, perhaps, the audiences’ lack of concern for musical or dramatic unity. Such sinfonias were written to please, and to please at first hearing, much like the showstopping ‘suitcase arias’ that some megastar singers brought along with them to substitute numbers they perceived to be untenable, much to the dismay of lesser and easily browbeaten composers.

The Italian overture is best characterized by the fast–slow–fast structure popularized by Alessandro Scarlatti, although other permutations exist. There are even fusions with the French model of Lully, comprising a slow and dotted opening, followed by a quick fugal-like movement. But in general the sinfonia is necessarily short and slight, consisting of several homophonic movements, contrasted with unchallenging wishy-washy counterpoint, and concluding with a dance-like finale—all of which coming to an end before things really get into their stride.

Although the majority of listeners would have been too self-absorbed to allow the burst of a fanfare to set the mood, build up anticipation, establish the principal key, and so on, there were nonetheless some musically-literate connoisseurs who appreciated the non-vocal fare. The Italian philosopher-essayist and diplomat Count Lorenzo Magalotti noted in 1669 in his diary, ‘before the comedy begins, that the audience may not be tired with waiting, the most delightful symphonies are played; on which account many persons come early to enjoy this agreeable amusement’. This echoes an observation, in the Relation d’un voyage (1664) by the French physician and man of letters Samuel de Sorbière, that ‘la symphonie y fait atendre agreablement l’ouverture du theatre, & on y va volontiers de bonne heure pour l’escouter’.

With this in mind, our recording is purely about the music. It is a sampling of a rich, yet untapped, genre—of independent instrumental works, lucidly crafted for the purpose of turning heads—unencumbered by posturing performers, and short-circuited for aural stimulation.