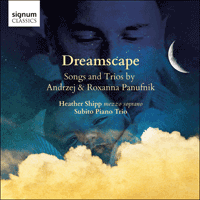 A unique programme of works by father and daughter.

Sir Andrzej Panufnik was a leading Polish composer of the 20th century, and his daughter Roxanna has made a name for herself in her own right as a contemporary composer in the 21st. This album, programmed by Roxanna to combine works by both her and her father, explores the parallels between their two musical languages and forms a touching tribute to Andrzej from his daughter.

'This must be a first: a father-daughter disc in which both are the composers. The centenary of Andrzej Panufnik (1914-1991) is being celebrated this year. It’s a wonderful opportunity to revisit his delicate, jewel-like music, at once appealing, rigorous and poignant. Today the name Panufnik is as frequently associated with Roxanna, who has masterminded this disc in tribute to her father. It includes a piano trio by each, songs by each, and one song—Modlitwa—which he started and she, years after his death, completed. Love Song, a setting of Philip Sidney which Andrzej dedicated to his wife, Camilla, makes a heartfelt opening. Dreamscape, a vocalise here played by cello and piano, dates from the same period. This is intensely personal music-making, beautifully performed' (The Observer)
'The centenary of the birth of Andrzej Panufnik is marked in his adopted country by special performances and recordings, including these songs and trios by the composer who was born in Warsaw at the start of the First World War, and by his daughter. The father's songs to fine English texts—Philip Sidney, Shakespeare—are shot through with melancholy, even when celebrating love, Roxanna, born in London, marvels at her city as Wordsworth did, from Westminster Bridge in That Mighty Heart, and her delight in her life bubbles through her piano trio Around Three Corners. But Andrzej's cello vocalise, Virtue, and his early Piano Trio Op 1 steal the show' (The Independent on Sunday)

In 2009, Austrian musicologist Dr Christian Heindl presented a concert of my father’s and my chamber music at the Polish Cultural Institute, in Vienna. It was the first time that father and daughter had been exclusively programmed together and was a brave step—by both him and me (for letting him do it!). All through the early years of my composing career, I had strived to separate my composing from my father’s, determined to forge as different a style and musical identity as possible. What I hadn’t banked on is that genes would inevitably play a vital part in our mutual love of simultaneous major-minor harmonies and both our styles, in different ways, being neither conservative nor progressive—i.e. hard to pigeon-hole.

Dr Heindl’s concert formula continued to be a success and has since been much repeated—especially in my father’s native Poland. Hence this disc, which includes all of the pieces from the original programme and more.

My father’s Love song (1977), a setting of the Elizabethan poet Sir Philip Sidney’s sonnet ‘My True-Love Hath my Heart’ is one of two pieces on this disc originally written for brother and sister duo, Peter & Meriel Dickinson. As with many of his works it’s dedicated to the love of his life—my mother Camilla—who helped him as amanuensis, whilst he was desperately ill in the last weeks of his life, to notate a harp and string arrangement. This was premiered, devastatingly and poignantly, shortly after he died. It seemed only right to open this disc with a tribute to the woman who made that last 30 years of his life the happiest and most productive.

The sonnet settings continue. Like my father, I have always been drawn to Elizabethan poetry—particularly Shakespeare. Mine eye (1999) was a surprise Valentine’s present for my boyfriend of the time ‘JS’ (you know who you are …) and, though the relationship did not survive, our friendship and the continued performing of this song has. Sweet love remember’d (2005) was a private commission (also a surprise) to celebrate a love that has lasted 50 years and more, an anniversary present from Dora Black to her husband, Jack.

In 1990 the Polish poet Jerzy Pietrkiewicz, a close friend of my father’s, showed him a two-versed prayer, Modlitwa (1990/99), that he had written to the Virgin of Skempe. My father set the second verse and left the first verse to be narrated, saying that he didn’t want to obscure these beautiful words with music. Instead, he gave them a beautifully poignant and simple background, over which they could be recited. In 1999, a commission from the Lebanese Al Bustan Festival for a ‘Polish-themed piece’ coincided with Jerzy asking me to add to the song by setting the narrated words to music (which was by then 8 years after my father’s death). It was a very difficult decision to make but a dream about my father, encouraging me to improvise with him at the piano, persuaded me that it was all right to do it. The piano introduction is by my father, my part begins with the voice entry ‘Z jeziora na jezioro,’ and then I hand back to Dad at ‘Aniele Stróżu mój …’.

One of my favourite stories about inspiration and my father is when he was on a visit to post-war London in the 1940s and, restless at night, went for a walk around town. He found himself on Westminster Bridge, gazing at a cloud-bedecked moon shining down on the majestic Thames. The piece it inspired was his gorgeous Lullaby for harp and strings and he continued to love London—especially when it became his home, a decade or so later. For this reason, I have included my song That mighty heart (2008), which its poet Wordsworth subtitles ‘Composed upon Westminster Bridge, September 3, 1802’. Its atmosphere of breathless awe and wonderment at the majestic beauty of the City and river, in the early hours of the morning, was clearly as stirring a sight to him as it was to my father. This song was commissioned by the NMC (along with 59 others by other composers) as part of celebration of British Song over the last 60 years.

In 1992, a year after my father died, the Park Lane Group asked me to write Virtue for a memorial concert to my father. They had just auditioned a wonderful young mezzo-soprano called Heather Shipp and they asked me to write a song for her, accompanied by the strings of conductor Mark Stephenson’s chamber orchestra, London Musici. This George Herbert (whose alluding to the metaphysical hugely appealed to my father) poem initially seems irrepressibly sad but its overall mood summed up my feelings about the immortality of music and the living legacy of my father’s compositions.

Dreamscape (1977) was a vocalise, composed by Dad alongside our first track Love song, for Peter & Meriel Dickinson. My father was trying to express the ‘unconscious language of the soul’—a kind of dream language, which is made especially haunting due to the oscillating quarter tones which appear at the beginning. A few years ago, when our pianist Lech Napierała and cellist Piotr Hausenplas were looking for a piece to play (and no singer was available), I suggested they try substituting the vocal part with the cello. You might be wondering why we have the instrumental version on this disc when we have the lovely Heather Shipp but, actually, my mother and I much prefer it this way—particularly as my father had always admired the cello for its ‘singing quality’.

I must have been going through a particularly contrary phase when I composed my piano trio Around three corners (1995), commissioned by Barnes Music Society for Triangulus (hence the title). The theme appears in the very middle of the piece and is flanked by variations either side—almost a palindrome (another subconscious influence from Dad) but not quite as the latter variations are only retrograde in mood, key and tempo. Continuing the contrariety, the piece opens and closes with the strings accompanying the piano, providing a bustling bitonal harmonic middle to the piano’s outer theme and bass line.

My father was only 19 years old and still a student at the Warsaw State Conservatoire when he wrote his Piano Trio Op 1 (1934, rev. 1944 after being destroyed in the Warsaw Uprising)—it’s astonishing to believe when you hear the sophisticated harmonies and textures, which in some ways remind me of the late French romantics such as Ravel and Debussy. He says that it was originally an ‘Exercise’—the opening movement his first attempt at Sonata form, the second is song form and the third is a rondo. What especially interests me is that he says ‘without thought of public performance, I was trying not to control essential technicalities but to write a true musical composition containing some expressiveness of feeling and vitality’—he certainly succeeds with sweeping melodies and passionate mood changes that one could imagine occurring in a 19 year-old. It also echoes my personal sentiments now, as a slightly more mature 46 year-old who is prone to conveying emotion in her music over and above anything else! The version on this recording was subsequently revised again after his escape to the UK in 1954 but it would have been fascinating to hear what changed between his carefree and ebullient original teenage work to the war-scarred 29 year-old’s version on this disc.

So there you have it. A very personal recording that reflects the incredibly close relationship I had with my father—not just musically but personally. I feel so privileged to be his daughter and lament the youthful stubbornness that prevented me from gleaning so much potential wisdom from him and proclaiming my pride in my heritage, loud and proud. So it’s with enormous pleasure that I present to you this disc—a testament to all the above. Now I’m proclaiming! Thank you for listening.