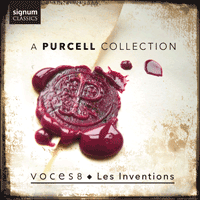 The young, virtuoso A Cappella ensemble Voces 8 returns to disc on Signum with a sumptuous collection of early works by Henry Purcell. Joined by the specialist early-music ensemble Les Inventions, the group explores Purcell’s astoundingly diverse output—there is hardly a genre in which he did not express himself: anthems, odes, funeral music, semi- operas, masques, sonatas, consort-music, songs and catches populate his extraordinarily multifaceted œuvre. It is this astonishing diversity that we wish to celebrate by inviting the listener for a stroll through the world of one of England’s greatest composers. 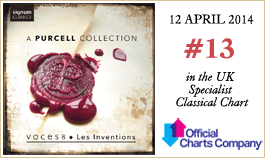 'Every number here has something particularly arresting within it, all supported by persuasive and committed singing, and playing of intense charm. Recorded sound, though stereo only, envelops the performers in the spacious warming acoustic of a French church' (BBC Music Magazine)» More

'This album very much "does what is says on the tin"—it promises a "stroll through the world of one of England's greatest composers" and that is what we get. Anthems alternate with songs and choruses from operas and odes in a rich demonstration of Purcell's extraordinary versatility … this is a lovely collection, reflective of the composer's eclectic talents, and beautifully performed' (Early Music Review)» More

It is said that Henry Purcell never set foot outside England, in the same way that Johann Sebastian Bach hardly left his native Saxony. Yet, both have become pinnacles of our Western music culture to an extent they could have little imagined in their own lifetime. In terms of style, they were well-versed in their respective native traditions while being permanently on the lookout for all that was foreign. Bach emulated Vivaldi and admired Couperin. Purcell fed on Italian models and drew inspiration from the courtly manner of Lully. The corpus of Purcell’s music, although not as large as Bach’s, easily rivals it in terms of diversity. There is hardly a genre in which he did not express himself: anthems, odes, funeral music, semi-operas, masques, sonatas, consort-music, songs and catches populate his extraordinarily multifaceted oeuvre. It is this astonishing diversity that we wish to celebrate by inviting the listener for a stroll through the world of one of England’s greatest composers.

Our perambulation starts with Praise the Lord, O Jerusalem, an anthem composed for the coronation of William and Mary at Westminster Abbey in 1689. Opening with a sober yet sumptuous instrumental symphony, the anthem’s five-part vocal texture offers great richness, alternating imitative and contrasting material.

A change of scenery comes with To the hills and the vales, a great favourite from Purcell’s only opera, Dido and Aeneas. Based on Book IV of Virgil’s Aeneid, the plot recounts the love story of the Carthaginian queen Dido and the Trojan hero Aeneas, as well as her despair at his abandonment of her. The chorus celebrates their meeting, and urges them to enjoy their romance.

One of the most tender and touching pieces, By beauteous softness mix’d with majesty, is an excerpt from the birthday ode for Queen Mary Now does the glorious day appear, composed in 1689. Based on a ground, the vocal solo leads into an instrumental section of great meditative gentleness.

An early work dating from around 1680, the full anthem O God, thou art my God is widely known in Britain, appearing in an abundant number of manuscripts. Its final ‘Hallelujah’ even gave birth to a separate hymn-tune known to churchgoers as ‘Westminster Abbey’. The composition, in archaic style, brings to light the composer’s debt to his precursors Tallis, Byrd and Gibbons, whose music he was familiar with from his youth. Those influences are obvious in the first homophonic phrase of the anthem, as well as the imitative sections which unfold with great melodic and harmonic inventiveness.

The chorus How happy the lover is from the semi-opera King Arthur, or The British Worthy (1691) setting a libretto by John Dryden. In Act IV, the sirens tempt Arthur into the stream, but to no avail. Then a group of nymphs and sylvans appear from behind the trees and—according to original stage directions—‘sing and dance the following song, all with Branches in their Hands.’ Purcell weaves into this wonderfully sensual passacaille an array of diverse vocal settings: tutti, 3 female and 3 male voices, duets, etc. The influence of Lully and his Passacaille d’Armide is unmistakeable.

Amongst many examples of French influence on opera in England, usually involving staging, costume and dance, the Cold song stands out as a bestseller. From Act III of the semi-opera King Arthur, (libretto by Dryden), it is sung by the Genie of the Isle (of Britain) whom Cupid has woken from his frosty slumber beneath a sheet of ice. The chilling effect of the piece is enhanced by the composer’s indications to use tremolo in the vocal part and in the strings. It is likely that Purcell was alluding to a similar scene from the Lully-Quinault lyric-tragedy Isis from 1677.

The chorus Behold O mightiest of Gods comes from the semi-opera The Prophetess, or The History of Dioclesian (1690), on a libretto by Thomas Betterton, actor-manager of the Queen’s theatre at Dorset Garden. The opera closes on a Masque of Cupid, a tribute to King William III, as indicated by symbols and metaphors in the surviving staging instructions. A ‘masque’ was an allegorical insertion into a play or opera, commenting on the action through music and lavish choreography. This particular masque ends with a stately and resplendent section in which oboes and strings dialogue before the voices solemnly celebrate the God of Love’s incontestable superiority.

The anthem My heart is inditing of a good matter was specially composed for the coronation of James II (April 23rd, 1685). According to a contemporary source, it was ‘performed by the whole Consort of Voices and Instruments’ after the coronation of his consort, Mary of Modena. The splendour of the ceremony clearly appealed to Purcell’s imagination, as he opted for an eight-part choir with string accompaniment. A joyful and majestic instrumental ‘Symphony’ alternates with impressive choral developments, whilst dance-like dotted figurations and rich harmonies evoke a sense of magnificence.

Bid the virtues is an air from the ode Come ye sons of Art, away, the last of the six odes that Purcell composed for Queen Mary’s birthday (April 30th 1694) as she died of smallpox that December, aged only 32. The piece is written as a trio, in which the vocal line interlaces sensually with the oboe above a smoothly unfolding bass-line.

The chorus Hail! bright Cecilia comes from Purcell’s Ode to St Cecilia—his delightful work in honour of the patron saint of music. This was composed in 1692, on a text by Nicholas Brady and performed at Stationers’ Hall. The chorus contains the immortal words ‘great patroness of us—and harmony’, where ‘us’ refers to the Gentlemen of the Musical Society, founded in the early 1680s. In the grave key of D minor, homophonic choral ‘blocks’ alternate with mighty fugal sections and a pair of amorous duets in recitative style.

Strike the viol is another well-known song from the ode Come ye sons of Art. The text delightfully summons various musical instruments usually associated with sentiments of tenderness and devotion: ‘Strike the viol, touch the lute; wake the harp, inspire the flute…’ and invites them to play in praise of their ‘patroness’, Queen Mary—diplomatically making an appreciative reference to the queen’s generous patronage of Purcell himself. Again the whole structure reposes on a ground bass with episodic transitions during which the recorders (‘flutes’), and violins playfully converse.

Purcell wrote Thou knowest, Lord, the secrets of our hearts for the funeral of Queen Mary II in March 1695. This took place at Westminster Abbey, where Purcell had been organist since 1679 and where, in less than a year’s time, the same anthem would be sung again at his own burial. The text consists of a prayer for mercy recited at the graveside, before the body is interred. It had previously been customary at royal funerals to perform the Burial Music by the Tudor composer Thomas Morley (1557-1602). However, for reasons that are unclear, part of the Second Dirge Anthem got lost and so Purcell undertook the composition of a replacement setting of the final sentence of the text. Whilst Thou knowest Lord is not typical of Purcell’s choral music, this intensely emotional work offers unexpected and dissonant harmonies whilst still sitting well alongside Morley’s more conservative style.

The semi-opera King Arthur, like Dioclesian, ended with a masque. In the case of King Arthur the masque depicts a celebration of peace between Britons and Saxons, and the prediction of a bright future for Britain. Fairest Isle was sung by Venus, probably in a machine drawn by doves hovering over the Isle of Britain which has just ‘risen from the sea’. It is one of Purcell’s most tender and, at the same time, most vibrant melodies.

The Tempest (1695) is an example of the way in which, in the late 17th and 18th centuries, Shakespeare’s plays were extensively re-written and adapted in order to make them conform to contemporary tastes. In this semi-opera of 1695, additional characters are created in order to ‘balance’ existing Shakespearean ones, including a female ‘Spirit of the Air’ as a partner for Ariel. It is she, rather than Ariel himself, who sings Full fathom five. In this picturesque solo followed by a chorus, the sea-nymphs’ knell is represented by mysterious bells chiming in the continuo.

As our journey through Purcell’s extraordinary diversity comes to an end, and having witnessed his outstanding originality and creative power, it is hard to disagree with John Playford, a prominent music publisher of the time, who wrote in 1698, three years after Purcell’s death, that the composer was ‘especially admired for having a peculiar genius to express the energy of English words, whereby he moved the passions of all his auditors.’