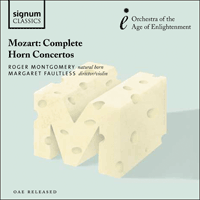 Under the direction of Margaret Faultless the OAE shines on these new recordings of Mozart’s Horn Concertos, featuring sublime performances by Roger Montgomery on the natural (valveless) horn. As well as lesser-known gems of Mozart’s horn repertoire, at the centre of the collection comes the lyrical Horn Concerto No 4, K495, featuring thrilling fanfares and brilliant dialogue between the solo instrument and orchestra.

'Montgomery slips into their varying moods through affecting phrasing, resilient changes in tempo, accentuation and dynamics, partnered by the OAE at its best. Well worth owning' (Gramophone)
'Montgomery plays the notoriously difficult valveless horn with extreme dexterity and skill, revealing a wide range of tones. The orchestra provides tight and sparkling accompaniment' (Classic FM)» More

Mozart’s celebrated horn concertos were all written during the last ten years of his life in Vienna. Four, or most probably five, of them were composed for his childhood friend, the virtuoso Joseph Leitgeb (or Leutgeb), but Mozart also wrote works for other horn-players. On this recording the ‘Leitgeb’ concertos are ordered according to their date of composition, with two earlier works (possibly for Jacob Eisen) placed at the end. The 1862 Köchel catalogue of Mozart’s works does not coincide with the actual chronology of the concertos, which has now been established through the advent of paper-dating technology.

Leitgeb was born in 1732, near Vienna, and was one of the foremost wind players of his day. Joseph and Michael Haydn, Dittersdorf and Hofmann all wrote concertos for him and between 1761 and 1763 he performed as soloist at the Vienna Burgtheater on fourteen occasions. In 1764, after a brief spell at Esterhazy, he was listed as horn-player for the Salzburg court, where he first encountered the young Mozart and became a family friend.

In 1777 Leitgeb moved to Vienna and asked Mozart’s father, Leopold, for a loan to buy a ‘snail’s shell’ of a house ‘with rights to sell cheese’. He also requested a concerto from Wolfgang. Leitgeb received his loan promptly enough, but had to wait six years for his concerto. There is no evidence to show that he ever sold cheese, nor any to show that Leopold ever got his money back!

Leitgeb played the valve-less hand-horn, or Waldhorn, which was a refined descendant of the hunting horn. The right hand was placed within the bell to ‘bend’ the natural harmonics downwards. This hand-stopping technique enabled production of previously missing notes in the mellifluous lower registers and it is the method employed by Roger Montgomery on this recording.

It should be noted that works written for Leitgeb in his earlier years embraced the highest and lowest registers, but as he aged his range narrowed. Mozart is sensitive to this, as can be heard by listening to the works chronologically, and the special camaraderie between the two is evident from the inscription on his first completed concerto (K417), ‘Wolfgang Amadé Mozart has taken pity on Leitgeb, ass, ox, and fool, in Vienna on 27th May 1783.’ This banter seems to be typical of their relationship, with the young composer teasing his avuncular, but less roundly educated friend. The three-movement model of this concerto sets up the pattern for his next two and is strongly influenced by the Bohemian pioneer of horn concertos, Antonio Rosetti (né Rösler, c1750-1792). The first movement is in sonata form, with the second a serenading romance and the finale a vivacious hunting rondo.

Around 1785 it appears Mozart took pity on Leitgeb again in the form of another concerto, this time in E (K494a). Tantalizingly it was never completed and from this ambitious opening the listener must imagine what might have been …

On 17 June 1786 Mozart completed a second concerto, somewhat intriguingly in four colours of ink—an experiment he made with other works too. There is speculation that this was to highlight certain underlying musical strands, but it might equally have been Mozart just having fun! K495 is longer than the 1783 work. It includes a cadenza in the first movement and its hunting finale is surely the most iconic of the horn repertoire.

For the third of Mozart’s horn concertos in E flat (K447) a different orchestration is employed. Oboes and horns give way to clarinets and bassoons and the work has a richness of tone and a harmonic complexity that lend particular gravitas. It is possible that the central Romance was originally conceived as a stand-alone piece since Mozart’s signature is placed above it. Curiously the work is not mentioned in Mozart’s own catalogue, conceivably because it was a private gift to Leitgeb.

The last of Mozart’s ‘Leitgeb’ concertos (K386b) was never finished. His pupil Süssmayr reworked the Rondo (K514), changing the original horn part and the orchestral interludes. Süssmayr adds a quote from the The Lamentations of Jeremiah, a plainsong usually sung at Good Friday church services. Perhaps the autograph was mislaid and Leitgeb tried to recall it to Süssmayr, who was in need of more ideas. At one point in his score he writes, 'Leitgeb—please help!' Attending a church service may have inspired him. He forges his master’s signature with the date, Good Friday—6 April 1792. Mozart had died in December 1791, so this is a puzzle, or perhaps even some kind of clue.

Following the Süssmayr version is my own reconstruction of the Rondo, using Mozart’s original manuscript. The horn part is complete and has mischievous jibes written over it in Italian, mocking the ageing horn-player’s technique as well as the music itself. 'At least get one note in tune, Blockhead!' he writes (politely translated), along with other unprintable remarks! 'Here comes the tune for the fourth and, God willing, last time', he continues, and over the final trill he adds, 'Ah—a billy-goat impression!'

To conclude the disc are two more reconstructions of my own that may be dubbed Mozart’s Horn Concerto No. '0' since they were written around March 1781, the month he arrived in Vienna. The first movement (K370b) contains all the original horn part, save for eight or nine bars. Mozart’s son, Karl, cut up the manuscript for souvenirs and it is only recently that they have been reassembled. The horn-writing style, with its leaping octaves, is quite different from the Leitgeb works.

The final Rondeau (K371) is a brilliant sonata-rondo, now restored to its entirety after the recent discovery of sixty missing bars.