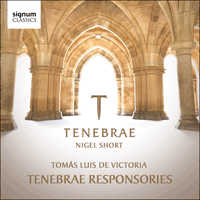 Tenebrae turns to the sublime music of Tomás Luis de Victoria with this recording of his timeless Tenebrae Responsories. The works mix the words of the Gospels with other texts commenting on collective suffering written around the 4th century, and would traditionally have been performed as part of a moving service in which candles are slowly extinguished to mark the progress and suffering of Christ that forms the Passion story.

'Tenebrae, directed by Nigel Short, perform the sublime Tenebrae Responsories of Tomas Luis de Victoria. The works mix the words of the Gospels with other texts commenting on collective suffering around the fourth century. Highly recommended' (The Northern Echo)

Tomás Luis de Victoria (Ávila 1548–Madrid 1611) left his native Spain in 1565, at the age of 17, to study in Rome. He would stay there over 20 years, and publish many of his most important works, including, in 1585, his monumental Officium Hebdomae Sanctae.

When Thomé, as he called himself, arrived in the Eternal City the musical star was undoubtedly Palestrina (1525–1594) who at that time was Maestro de Capilla at Santa Maria Maggiore among other positions, and later, from 1571, served at the Julian Chapel at St Peter’s.

Victoria, initially supported by a student grant awarded by Philip II of Spain, studied at the German Seminary founded only a few years previously by St Ignatius Loyola. His first major position was as Maestro de Capilla at the Roman Seminary, taking over from Palestrina. His work as a composer was first noted with his 1572 collection of motets. In 1573 he was also appointed Maestro de Capilla at the German seminary, and in the following year was ordained priest.

His 1572 collection was followed in 1576 by his first book of Masses, with other motets, Marian antiphons and Magnificats. 1581 saw another two publications, one of motets for the liturgical year and the second of Magnificats and Marian antiphons. 1583 saw a second book of Masses and a new anthology of motets (not all were new, the sharp commercial mind of Victoria already recognised opportunities in 'best of' collections). In 1585 another collection of motets were published, some of which were now in their third Edition, and also the collection of music for Holy week.

This Officium Hebdomae Sanctae contains 37 works, with music set from Palm Sunday to Easter Saturday. In addition to the Responsories set for Thursday, Friday and Saturday included in this recording, there are also the Lamentations of Jeremiah, the psalm Miserere mei and the Benedictus (Canticle of Zachary) for the same offices, two Passion settings, hymns, motets, the Reproaches and other music for the week. Some of the works included in this collection appear to have been composed significantly earlier. There is a manuscript in the Vatican collection with the Lamentations in a longer form, apparently dating from the late 1570s, which was subsequently corrected (there are singers’ markings and annotations by Victoria himself) and simplified for publication. Three of the motets had also appeared in earlier publications.

The office of Tenebrae (the shadows) is in fact the combination of two offices, the early morning Matins, which was followed by Lauds. Later these were performed together on the previous evening after Compline. This is to say that the Tenebrae for Maundy Thursday would have been sung on Wednesday—in Rome the practice was to have this office at around 4pm.

The main feature of this office, and from whence it derives its name, is the gradual extinguishing of 15 candles arranged on a triangular stand called a hearse. These candles represent Christ (the highest candle), the disciples (except Judas Iscariot), and the so-called three Marys (three female disciples who went to the Tomb, however, different traditions give distinct names).

The Tenebrae is divided in each day into the Matins of three nocturnes each of which had three psalms, a short versicle and response, Pater noster (silent) and a reading. This was followed immediately by Lauds, made up of five psalms, a short versicle and response, the Benedictus canticle, the gradual text Christus factus est, Psalm 50 (Miserere mei) and a closing prayer.

The readings of the first nocturne were from the Book of Lamentations, which were set by Victoria but he did not compose music for the Responsories of these readings. The readings for the second nocturne were from the Commentaries of St Augustine and, for the third, from the letters of St Paul. These were not generally set polyphonically (there is a set by the Portuguese composer Manuel Cardoso) and would have been sung on a simple reciting tone. Victoria set the Responsories that followed each of these readings, so that for each day there are three sections of the Lamentations corresponding to the first nocturne, and three Responsories each for the second and third nocturnes.

The texts of the responds follow the Passion story, mixing phrases from the Gospels with other texts commentating on collective suffering, thought to date from the fourth century. For Thursday (Feria V in Coena Domini), the first nocturne (not set) starts in the Garden of Gethsemane, the second and third nocturnes consider the betrayal of Judas and Jesus’ arrest. The Good Friday (Feria VI in Parasceve) nocturnes consider the trial and Via Crucis, and on Saturday (Sabatto Sancto) reflect on the death and, finally, with Sepulto Domino, the entombment of Jesus.

Other composers at this time composed music for this liturgy. Palestrina composed five sets of Lamentations, but no Responsories, while Roland Lassus, who had also worked in Rome during the 1550s, composed the same 18 Responsories as Victoria and published them in the same year, 1585, as well as nine Lamentations. Carlo Gesualdo composed settings of all 27 Responsories, these being of much greater length and complexity than either Victoria’s or Lassus’ versions.

The illumination is gradually reduced throughout the service. On the hearse, one candle is extinguished, starting from the lowest level of the hearse, after each of the fourteen (nine for Matins and five for Lauds) psalms. The six candles on the altar are also extinguished during the recitation of the Benedictus, and the final flame (representing Jesus) is placed under the altar so as to end in almost total darkness, during the Christus antiphon and final prayer. The office ends with a 'great noise' (strepitus in Latin) made by slamming books against the choir stalls or stamping on the floor. This is to represent the earthquake after the death of Christ. The 'great noise' continues until the candle is brought out from under the altar to reveal the light of Christ still burning, representing the resurrection, and replaced in the hearse. This is the signal for the participants to leave in silence.

Victoria set the responsories, like the Lamentations, for four voices, mostly SATB, but for each nocturne the second responsory was set for a different combination—SSAT, often also sung an octave lower by tenors and basses, following a Roman tradition dating from the 18th century. On this recording Tenebrae factae sunt is presented in this low voice version, most fitting for the text 'Darkness fell when the Jews crucified Jesus'.

The Responsories have a balanced structure of three parts: a two part respond and a versicle. After the versicle, the second part of the respond is repeated, giving a structure of ABCB, where A and B are the two parts of the respond, and C is the versicle. Victoria always writes this versicle for a reduced number of voices, and the respond sections for four voices. For liturgical purposes, the final responsory of each nocturn has an additional repeat of the complete respond, giving an ABCBAB form, however, this extra repeat is often omitted in concert performance. There is also an overall scheme for the reduced voice sections: with the exception of the very first responsory, which is a duet, the first of each set of three is set for SAT voices, the third for ATB and the second makes use of the extra soprano line, giving either SSA or SST. This pattern allows for simple contrasts within each set.

Although Victoria did not compose any secular music, his treatment of text is almost madrigalian at times. In general terms, there is little melismatic writing except to highlight a particular word, and repetition of short phrases is also employed for effect, sometimes using pairs of voices to build up the musical tension, for example the 'Adversus Dominum' section of Astiterunt reges.

Victoria uses similar rhythmic and melodic devices when textual phrases occur in different responsories, for example the text 'Si est dolor sicut dolor meus' which appears in an almost identical form in Caligaverunt (No 12) and O vos omnes (No 14), and which employs the expressive downward scale of the fourth used as the famous Lachrymae motive by John Dowland. Likewise the text 'Tamquam ad latronem, cum gladiis et fustibus' which appears first in the second respond section of Seniores populi—the last responsory of the Thursday collection, and which also begins the Responds of Friday. Another example is the phrase 'Bonum, melius illi erat si natus non fuisset', referring to Judas, which appears (with slight variation) in all three of the responds for the second nocturn of Thursday. Similarly, the responsory Jesum tradidit impius (No 11) has almost identical music for its opening phrase as Judas mercator pessimus (no 2) to remind the listener of the Judas’ betrayal. Victoria always complements the texts with his apparently simple setting, without ever letting the music overpower them. At the same time he produces a coherent, structured and introspective journey through the three climactic days of Holy Week.