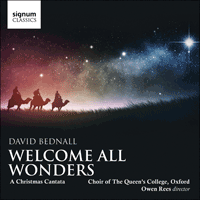 Welcome all Wonders: A Christmas Cantata is a large-scale work for choir, organ, and trumpet spanning 15 movements. It celebrates the Christmas story through an imaginative selection and juxtaposition of poetry and liturgical texts, and provides a multifaceted telling of the familiar narrative. The celebratory aspects of Christmas are tainted by darker themes that are inherent to the story but are easily overlooked, culminating in an enlightened and engaging work that explores the Christmas story in a profound manner.

The Choir of The Queen’s College, Oxford is among the finest and most active university choirs in the UK. Its wide-ranging repertory includes a rich array of Renaissance and Baroque music and contemporary works.

'The performance is excellent … the sound is fresh and clear, the choir achieving a satisfying blend and very good diction. There are several opportunities for choir members to sing solos and all do very well … an original and very rewarding addition to the Christmas choral repertoire' (MusicWeb International)» More

Welcome all Wonders: A Christmas Cantata is a large-scale work for choir, organ, and trumpet spanning 15 movements. It celebrates the Christmas story through an imaginative selection and juxtaposition of poetry and liturgical texts, and provides a multifaceted telling of the familiar narrative. The celebratory aspects of Christmas are tainted by darker themes that are inherent to the story but are easily overlooked. It was commissioned by The Queen’s College, Oxford in 2011, through the generous sponsorship of Berman Guedes Stretton Architects and Designers. The composer writes:

A work of this scale presents a number of challenges to—and opportunities for—the composer. These include the choices of texts (which also determine the pace and direction of the narrative), considerations of variety, and issues regarding the settings of the individual texts and their relationship to the overall ‘message’ of the work. Welcome all Wonders offers a traditional view of Christmas, stretching from Advent to Epiphany, with its timeless narrative to the fore. The choice of texts—from the vast range of seasonal literature available—was made so as to cover the principal components of the Christmas story, but not to be merely a re-writing of earlier oratorios. I decided that the story itself is so well known that there would not be a need for ‘narrative’ sections, i.e. the recitatives of works such as Vaughan Williams’s Hodie and Handel’s Messiah, and I therefore concentrated on providing different scenes from the story as wholes in themselves. Only one Biblical text—‘In the beginning was the Word…’, the opening of St John’s Gospel—is used, hailing the culmination of the cantata in the final movement. This Gospel text traditionally stands as the pinnacle in Christmas liturgies, linking this work to familiar traditions such as the Nine Lessons and Carols service, in which this is the final reading. In addition, I included some texts that focussed on the darker elements of the Christmas story. There were both theological reasons for this (in that the foreshadowing of Christ’s sacrifice is very important) and musical ones: relentless rejoicing is difficult to maintain, and can become very wearing upon the listener. Such contrasts would also heighten still further the joyous moments.

My intention was that the music should be, as far as possible, emotive and immediate. I have always adored the music of Herbert Howells, and his maxim ‘I have composed out of the sheer love of trying to make nice sounds’ is a beautifully honest description and one I would hope to echo in this work. The work was designed to be useful for a variety of purposes, and, to this end, most of the movements are performable separately, thus providing material for services or smaller-scale concerts. That said, the cantata is conceived as an integrated large-scale structure; aspects of this include shared motifs and themes, and a certain relevance of particular keys. As well as the original themes I made use of Gregorian melodies in the work, both explicitly and as part of the texture. Compositional techniques range from the contrapuntal rigours of Alleluia, to the simple tunefulness of But peaceful was the night, and the monody of the closing pages of The Slaughter of the Innocents. I was keen to make the work accessible—although it is not, I hope, without its challenges.

The instrumental Prelude opens with what will become the Alleluia theme. The whole is possessed of an unsettled and disturbed quality; a world very much in waiting. The slower central section introduces two motifs associated respectively with ‘prophecy’ and ‘journeying’. The faster final section uses the motif associated with the Virgin and makes reference to the Gregorian ‘Veni Emmanuel’.

Alleluia (which follows immediately) presented the challenge of constructing a satisfactory musical edifice from a single word; the structure is thus determined purely by the musical material, the ‘Alleluia’ being part of this pseudo-instrumental edifice. Following the opening cry of joy, the single word is subjected to a plethora of textures, from dense chordal writing to polyphonic complexity. Following the central glow of D major the opening rhythmic material returns and the mounting imitative textures and constantly shifting metres lead to a return of the opening theme and an ecstatic climax.

The setting of A virgin shall conceive is closely wedded to the dramatic nature of the text. The opening reiterates the prophecy motif and the voices intone the words of this prophecy. The dance-like central section makes use of complex time signatures to give something of the air of impatience, and there is ample opportunity for colourful word painting. The final cries of ‘Emmanuel’ here end inconclusively: the Saviour is still awaited.

Ye heavens! from high the dewy nectar pour presents a utopian vision of peace in slow, luminously dissonant chords over an aleatoric organ part; the randomly and gently shifting note-patterns are the soft background onto which the message is poured.

Today is the beginning of our salvation is scored for upper voices and tells of the Annunciation. The central part of the text—Mary’s first-person response to the Annunciation—is from the Orthodox Akathist, while the outer sections (the first onstage, the closing, offstage) present the Orthodox Troparion of the Annunciation in a series of melismas over cluster chords—a modern interpretation of chant. The central section depicts the nervous Virgin and the ever more ecstatic cries of both her and the choir, the dancing trumpet melody leading to a climactic central outburst, ‘Alleluia’. All tension deliquesces as the trumpet muses over a pedal note and the opening material returns.

Oh! little blade of grass is a dense and tortured movement, featuring intense choral writing. The dark poem by Dora Greenwell is wedded to both astringent and richly dissonant textures, mixing melisma and clusters (including the complete whole-tone scale), finishing in darkness.

The instrumental Journey to Bethlehem depicts the trudge of the donkey; a tired, broken march. The extended trumpet melody fully works out the ‘journeying’ motif. The central section is more unsettled; the motifs of the Virgin and ‘prophecy’ push towards a radiant climax, after which the tension dissipates, leading to a slightly varied recapitulation of the opening theme. In its closing moments the plainchant ‘Hodie Christus natus est’ is heard, freely, and from afar.

I saw a stable is a simple chorale-like setting of this beautiful poem by Mary Elizabeth Coleridge, reflecting on the birth of the Christ Child. Shepherds, rejoice! is by contrast a highly rhythmic and boisterous setting for the men, appropriately depicting a mood of rustic joy. The ternary form contrasts the fanfare-led outer sections with the more contemplative central music.

There follow two movements on the Epiphany theme. See how from far, upon the eastern road is a setting of Milton’s colourful text and reprises the ‘journeying’ motif, now strong and purposeful, driving relentlessly to a huge, joyful climax. The unaccompanied Tribus miraculis ornatum, which follows, makes much use of filigree textures and dancing rhythms, the occasional solo voice appearing as a glint of light. This atmosphere of untroubled joy frames a more sombre, though by no means less warm, central section, recounting the Magi’s journey to the stable, Jesus’s first miracle at the wedding at Cana, and His baptism in the River Jordan. The movement ends with an incandescent ‘Alleluia’ in D major.

The Slaughter of the Innocents, the most extended choral movement, is in two distinct parts. The first—in which the drama of the infanticide, sung by Herod, his soldiers, and the mothers, is played out—is a type of grotesque dance of death, setting Longfellow’s lurid account of the massacre of the male children to dissonant, angular lines with a brutal and bitter irony. As the text shifts to Prudentius’s narrative, the massed forces of the unison voices lead to a shatteringly dissonant climax in the trumpet and organ; from these harmonic ruins a drone appears in the lower voices. Over this, the sopranos deliver the monodic lament of the slaughtered children (Christina Rossetti’s poem Holy Innocents), addressing their mothers from heaven; this is improvisatory in feeling, and heart-breakingly stark and devoid of harmonic backing. Between each verse, the trumpet delivers a solemn commentary. Each verse varies subtly; the altos add a companion line in verse three, and there are gentle shifts of drone in the final verse. The atmosphere created is of a frozen and expressionless chill.

After this there follows what is in some ways the emotional heart of the work—But peaceful was the night. Milton’s text is set to glowing, luminescent, simple harmonies, with a deeply touching, if subtle, emotional impact. The final verse, portraying the nativity scene, evokes a timeless atmosphere, with a poignantly dream-like quality.

After the intense emotion of these pages there follows an unaccompanied Gregorian chant, the hymn Ave maris stella, one of the most celebrated of all chant melodies. It features instrumental interludes between each verse, the model for this being the improvised versets of the great French organ tradition.

A sustained bottom C introduces the final movement. The only biblical text in the cantata, In the beginning, commences in intensely shrouded mystery. The clouds gradually clear and the word ‘God’ is declaimed in a full-textured and inevitable C major chord, blazing in intensity. An immense build-up on the organ piles climax upon climax until the trumpet heralds the words ‘Welcome all wonders’. The glowing ecstasy of these pages leads to a reprise of the earlier dance music from the third movement; this time however, ‘Emmanuel’ finally receives its rejoinder ‘God with us’. The opening ‘Alleluia’ returns and an unbridled and ebullient setting of ‘Hodie Christus natus est’ evokes a rustically medieval sense of rejoicing. The ‘Alleluia’ returns, antiphonally, to create an endless wall of praise, until the final held top C brings the work to an unambiguous close.