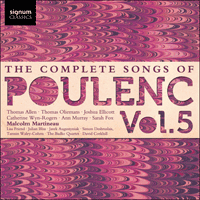 The fifth volume in this series includes several of Poulenc's early song collections where his favourite instrument—the human voice—is pitted against a diverse array of instruments, and to highly individual effect. Malcolm Martineau marshalls the troops to end the series in a blaze of colour.

In his notorious little 1918 pamphlet Le Coq et l’Arlequin, Jean Cocteau pronounced that ‘a composer always has too many notes on his keyboard.’ This was a lesson the young Francis Poulenc took to heart and observed throughout his career; and nowhere more tellingly than in the piano parts of his songs—far better written, he thought, than his works for piano solo.

After the First World War, the ethos of French art across the board lay in the direction of clarity and simplicity. Cocteau further cried for ‘an end to clouds, waves, aquariums, water nymphs, an end to fogs’, and Erik Satie, the cultural godfather of the new French music, warned that fogs had been the death of as many composers as sailors. Another target was the ‘music one listens to head in hands’—Wagner most notably, but also Schumann. For Poulenc then, in quest of song texts, the nineteenth century was largely to be avoided and only one of his texts, Théodore de Banville’s Pierrot, was published during it, while Jean Moréas’s four poems forming the Airs chantés were printed in the first decade of the twentieth. Otherwise Poulenc sought either distancing through pre-Romantic poetry or, as on the present disc, immediacy through poetry of his own time.

The Rapsodie nègre, written in the spring of 1917, is the earliest Poulenc work to have survived. In writing it for voice and instrumental ensemble, Poulenc was very much a child of his time. Even though Schönberg’s Pierrot lunaire was not heard in Paris complete until January 1922, its influence was already felt through the mediation of other works it inspired either directly, such as Stravinsky’s Trois poésies de la lyrique japonaise, or indirectly, such as Ravel’s Trois poèmes de Stéphane Mallarmé. But instrumentation aside, the essential character of Poulenc’s work owes very little to any of those three works, even if odd corners of melody and harmony suggest he had been listening to the Ravel Piano Trio. Overall, it owes more to Picasso’s African enthusiasms and could best be described as ‘neo-brutalist’, beginning with clanging consecutive fifths and embracing crude noises of all kinds, including the nonsense words of ‘Honoloulou’ which were provided by an unknown friend of the composer, decently obscured behind the pseudonym Makoko Kangourou. Ostinatos and sudden surprises abound, and Poulenc’s characteristic final, joky signatures are already in evidence. Only in the ‘Final’ does a touch of Romanticism appear briefly in the lingering echo of ‘Honoloulou’.

For his cycle Le bestiaire, composed two years later, Poulenc used a similar ensemble, omitting the piano and adding a bassoon. In keeping with the laid-back simplicity of Apollinaire’s poems, there are no acrobatics, brutalist or otherwise, for any of the seven instruments. Since this instrumental setting was the original version, we can appreciate how the bassoon sound might have suggested the falling chromatic line of the lurching dromedaries, while the clarinet takes on an almost ‘heroic’ role, as prescribed by Berlioz in his Instrumentation Treatise. In the final cadence of the second song the flute’s three notes give a warm colouring to the poet’s love, and in the fifth song the rising clarinet scales are fittingly echoed by the bassoon’s falling ones, mirroring the backward movement of the crabs. Finally, there is just a wisp of Impressionist fog in the portrait of the melancholy carps in their ponds, delineated by a high violin E flat harmonic.

The Quatre poèmes de Max Jacob, composed in 1921, show Poulenc at his most avant-garde. To the already edgy ensemble of flute, oboe, clarinet, bassoon and trumpet Poulenc adds lines of dissonant counterpoint punctuated by knotty chords, to the point that two years later he claimed to have burnt the manuscript of a work ‘lost in the polytonality and other rubbish of the style of 1920’. On the other hand, at their first performance in January 1922 the songs were encored. One critic, interpreting them as ‘a kind of derision or coldly mystifying parody of all the known forms of musical pathos’, thought they might restore the precision and clarity of the French composers of the past; another, wondering whether all this dissonance would in its turn become the norm, and eventually old hat, admitted that ‘at least his work contains music, colour and life.’ A single copy of the manuscript survived in the archives of Darius Milhaud, who conducted the premiere, and the songs were not finally published until 1998.

Poulenc wrote his Vocalise in 1927 for the ninth volume of Leduc’s series Répertoire moderne de vocalises-études, published in 1929. It follows the traditional pattern of such pieces, testing breath control, legato, intonation, dynamic contrasts and placing of high notes. The harmonic style, recognizably Poulenc’s own, veers between comforting lyricism and a sourer brand of melancholy.

In 1931 Poulenc composed no fewer than thirteen songs, among them settings of Apollinaire, the first since 1919. In the Quatre poèmes, one commentator has found ‘the veiled nostalgia, the tongue-in-cheek irony, the semi-popular tone that mark the best of Poulenc’s settings of this poet’. One would agree with the first and last of these attributes, but over irony one has to be cautious, since Poulenc specifically directs that ‘L’anguille’ should be sung without irony, and with ‘belief ’. As so often, he also asks that the words and notes should be allowed to speak for themselves, without nudging emphases. ‘L’anguille’ is a valse-musette, one of Poulenc’s many brushes with vulgarity, redeemed by its elegant harmonic diversions. In composing ‘Carte-postale’, dedicated to Madame Cole Porter, Poulenc had in mind a painting by Bonnard of Misia Sert, the social mover and shaker and friend of Diaghilev. The intimate, self-contained quality of the song stems in part from the economy of its material, the curling lines obliquely echoing each other. In contrast, the last two songs are patter songs—in the case of ‘Avant le cinéma’ up until the last line, when the poet’s faux-pompous pronouncement has to be ‘bien chanté’; and in the case of ‘1904’, up until the line ‘Je soupai d’un peu de foie gras’, where the bizarre modulations are suddenly brought under control, and the singer is adjured to sing ‘simplement’ in preparation for the final line, ‘très lent, amoroso’.

The title Banalités, given by Poulenc to his 1940 cycle of five Apollinaire poems, was taken from a collection of that name Apollinaire published in 1914, containing ‘Hôtel’ and ‘Voyage à Paris’. The composer found the remaining three poems in other collections. The resulting cycle therefore has a sense of movement about it, of twice gaining and finally leaving the comfort of the capital. In ‘Chanson d’Orkenise’, Poulenc had in mind the city of Autun, as he would in the Chansons villageoises written two years later. But this is not the city beautiful: the ‘vanupieds’ is cousin to the ‘mendiant’ of the later cycle, and the gates of the city close against him. After the smoky indolence of ‘Hôtel’ (surely Poulenc’s laziest song), we are fighting implacable winds on the desolate bogs of southern Belgium, even if the piano epilogue does give some comfort. Then ‘Voyage à Paris’, an even more boisterous version of ‘L’anguille’—Bernac and Poulenc liked to perform this song at the end of their exhausting concert tours, with home in sight. But finally … ‘Sanglots’. In later years Poulenc came to criticise some of the modulations as being ‘unexpected, and obviously so’. Do composers always know the value of their own music? Apollinaire’s language is, for once, enigmatic . But in some strange way Poulenc’s notes clarify it, if not always in detail, at least in its general thrust—melancholy, nostalgic, yet resigned, the regularly pulsing quavers assuring us that ‘my broken heart’ is indeed no different from ‘the heart of all men’. Then, on the phrase ‘la fin des temps’, Poulenc places a major chord. Writing in Paris in November 1940, was he saying that there would, eventually, be freedom, even if only in another world?

About Le bal masqué, Poulenc never had qualms. ‘To a lady from Kamchatka,’ he said, ‘writing to ask what I’m made of, I would send her my portrait at the piano by Cocteau, my portrait by Christian Bérard, Le bal masqué and the Motets pour un temps de pénitence. I think from those she’d get a very precise idea of Poulenc-Janus.’ Of all his works, Le bal masqué is perhaps the least susceptible to analysis, or even description. The action is all on a surrealist level, divorced from anything resembling causality or common sense, even the made-up popular tunes coming and going without rhyme or reason. The brilliant, often garish instrumental colours ‘underline the bombastic, the ridiculous, the pitiable, the terrifying. It’s the atmosphere of the colour plates in the Petit parisien of my childhood. "Oh Gawd!" my grandmother’s cook would exclaim, "’ere’s annuver bloke wot’s done in ’is sister-in-law."' And at the end of the piece ‘the audience should be stupefied and exhilarated as though they’d just got off a merry-go-round.’ As the critic said of Poulenc’s Max Jacob songs a decade earlier, Le bal masqué is flooded with ‘music, colour, and life’. As such, it is a fitting finale to these celebrations of Poulenc and the instrument he loved best of all: the human voice.