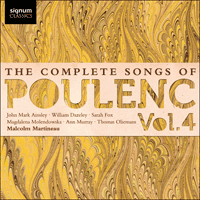 The songs of Francis Poulenc (some 150 works composed over a period of 44 years) remain consistently popular with concert audiences the world over. Varying in their individual style and character in a way that defies generalization, Poulenc set music to a wide range of different French poetry—both ancient and modern, and from the serious to the surreal.

This series charting the complete songs of Francis Poulenc is performed by some of the greatest singers of the day and accompanied by the exceptional Malcolm Martineau.

'There are some excellent performances … the sound is also very good—close and clear with a pleasant bloom' (MusicWeb International)» More
'Throughout Martineau is impressive as an imaginative and supportive accompanist. And he is joined by some fine performers. There are some gems on the disc' (Planet Hugill)

In his notorious little 1918 pamphlet Le Coq et l’Arlequin, Jean Cocteau pronounced that ‘a composer always has too many notes on his keyboard.’ This was a lesson the young Francis Poulenc took to heart and observed throughout his career; and nowhere more tellingly than in the piano parts of his songs—far better written, he thought, than his works for piano solo.

After the First World War, the ethos of French art across the board lay in the direction of clarity and simplicity. Cocteau further cried for ‘an end to clouds, waves, aquariums, water nymphs, an end to fogs’, and Erik Satie, the cultural godfather of the new French music, warned that fogs had been the death of as many composers as sailors. Another target was the ‘music one listens to head in hands’—Wagner most notably, but also Schumann. For Poulenc then, in quest of song texts, the 19th century was largely to be avoided and only one of his texts, Théodore de Banville’s Pierrot, was published during it, while Jean Moréas’s four poems forming the Airs chantés were printed in the first decade of the 20th. Otherwise Poulenc sought either distancing through pre-Romantic poetry or immediacy through poetry of his own time. The present disc contains settings of both kinds.

In 1949 Darius Milhaud looked back to his first meeting with Poulenc 30 years before: ‘He played us his Mouvements perpétuels and sang Le bestiaire which he’d just finished. I remembered, that day, something d’Indy had said to me about the evolution of music: “French music will become what the next composer of genius wishes it to be.” After all the Impressionist fogs, would not this art—simple, clear, and going back to the tradition of Scarlatti and Mozart—mark the next phase of our music?’ The simplicity and clarity of Poulenc’s score matched those of Apollinaire’s poetry which the composer had first read in 1912 at the age of thirteen. From then on ‘I was fascinated by everything I read of his. Most important: I heard the sound of his voice. Apollinaire’s timbre, like his whole output, was at the same time both melancholy and full of joy. Sometimes his speech was marked by a touch of irony, but never by deadpan humour. That’s why my Apollinaire songs must be sung without emphasising the comical sounds of certain words.’

Le bestiaire, containing Poulenc’s earliest known songs,was originally written in the first half of 1919 for singer and an instrumental group of string quartet, flute, clarinet and bassoon, the piano version arriving shortly afterwards. It also contained twelve settings from the 30 poems that make up the poet’s collection, and Poulenc indeed mentioned all twelve as figuring in a performance on 8 June 1919. But when it came to the editions published the following year, Poulenc took his friend Auric’s advice and reduced the twelve to six. Three of the rejected settings survived and are included here. The simplicity Milhaud refers to operates on at least two levels: in the close intervals of the melodic line, and in the use of repetitions in the accompaniment. How economically Poulenc renders the swinging gait of the dromedaries and the sportive swoops of the dolphins! The backwards movement of the crabs, reversing the opening phrase, is marked ‘ironique’ (but no winks to the audience…), while the stillness of the carps does momentarily look back to Impressionism, crowned by the sudden rising octave on the key word ‘mélancolie’. Of the three rejected songs, ‘Le serpent’ surprisingly recalls the music hall, and ‘La puce’ seems to look forward over 40 years to the mesmeric textures of the opera Dialogues des Carmélites.

After the popular Cocardes (see volume 1), Poulenc turned in December 1924 to the poetry of Pierre Ronsard (1524–85). Earlier that year La revue musicale had commissioned and published a number of settings of his poems (most famously, Ravel’s Ronsard à son âme), but not from Poulenc; his five Poèmes de Ronsard might possibly have been composed to show the magazine what it had missed. Initially Poulenc was happy with the cycle, commenting on a critic’s use of the words ‘magnifique, très émouvant’ to describe the fourth song: ‘these adjectives, replacing “charmant, délicieux”, come as something of a surprise.’ But soon he came to judge most of the cycle harshly. Once again, Auric had acted as the voice of his conscience, encouraging him to avoid the classical poets and stick to Apollinaire, Eluard and Max Jacob. Certainly his harmonic palette is now much richer, and perhaps not so well under control. The first and fourth songs seem to have been the ones he favoured, since he recorded them in 1934 with Suzanne Peignot who had premiered them in 1925, and who ‘sang them as I would if Heaven had made me a soprano’.

Poulenc had set four poems by Max Jacob (1876–1944) in 1921. Ten years later he returned to the writer, following Auric’s advice, and at the end of his life he mused rather sadly ‘I don’t understand why my Cinq poèmes de Max Jacob are so rarely done. It is without doubt one of my most characteristic [‘authentiques’] cycles.’ In these poems Jacob paints pictures of country life in his native Brittany, and Poulenc captures marvellously the combination of fantasy and earthiness. Here is the ‘composer of his own folksongs’ identified by Ravel, the harmonies now more firmly directed than in the Ronsard cycle, the textures clearer. But the listener can never entirely relax: in ‘Cimétière’, for instance, the phrases ‘rose blanche’, ‘rose rouge’ and ‘blanc muguet’ are set differently at each repetition. For once, in ‘La petite servante’, Poulenc is guilty of saying the obvious. Over the ecstatic bars of the servant girl’s final prayer, for a husband who doesn’t beat her every evening, he writes ‘avec charme’. How else?

In the early months of 1934 Poulenc set eight Polish folksongs, chosen by the soprano Maria Modrakowska, presumably with a view to their joint recitals in Morocco in March 1935, although we know of no reason for the lapse of time. On the edition of the songs Modrakowska indicates that the poems and tunes mostly date from the Polish uprisings of 1830 and 1831. Each of the songs is dedicated to one of the composer’s Polish friends, including Mme Arthur Rubinstein and Wanda Landowska. At different times Poulenc wrote that he had set them with the greatest care—and that really there was no call for anything other than an improvised accompaniment… He regarded the last of the eight as being the most successful and personal, and with good reason. Here the conventional, Chopin-based harmonies give way to something more demanding and powerful.

Although Poulenc had known Paul Eluard (1895–1952) since the end of the First World War, his first setting of poems by him dated from 1935. ‘For years’, he wrote, ‘I had been searching for the key to Eluard’s poetry.’ In the Cinq poèmes, ‘it grates for the first time in the lock.’ He attempted also to make the piano part as full as possible with the minimum of notes, and took as his model some Matisse drawings for a book of Mallarmé’s poetry in which the artist had successively whittled away everything inessential. Poulenc’s own favourites were ‘Plume d’eau claire’, whose lyricism makes an impact out of all proportion to its brevity, and ‘Rôdeuse au front de verre’, built around his familiar pulsing quavers in the piano part. The cycle was first performed by Pierre Bernac and Poulenc in the first recital of their long partnership, on 3 April 1935.

The composer had his favourites too when it came to the geography of France: Paris of course (but only certain arrondissements), Cannes, Monte-Carlo… and Autun in the Morvan district of Burgundy, a photo of which ‘I have on my mantelpiece as others do of the woman they love’. So it was with considerable enthusiasm that in 1942 he went about setting six Chansons villageoises by Maurice Fombeure (1906–81), likening them to Stravinsky’s Pribaoutki, but relocated from Russia to the Morvan. The accompaniment was originally for small orchestra (but with a sizeable percussion department) and Poulenc made a piano reduction the following year. Here again we find the master of the catchy tune, firmly based in conventional tonality but seasoned with chromatic decorations; and again, the spirit of Maurice Chevalier frequently hovers over all—the line ‘Le faux-col en cellulo’ in the second song actually bears the marking ‘prendre l’accent faubourien’ (with a common, suburban accent). If the sheer beauty of ‘C’est le joli printemps’ brings tears to the eyes, so too do the thick Mussorgskian thirds of ‘Le mendiant’, but for a very different reason: we should perhaps bear in mind that these songs were written during the darkest hours of the war.

The remaining three items on this disc all date from the end of Poulenc’s life. ‘Une chanson de porcelaine’, his last Eluard setting, was written in March 1958 to celebrate the soprano Jane Bathori’s 80th birthday the previous June. After the regular sequences of the first three lines, the phrase ‘Matin des loups’ moves the harmony into more uncertain territory. ‘Fancy’, a setting made the following year of ‘Tell me where is fancy bred’ from The Merchant of Venice, was commissioned by Marion Harewood and Ronald Duncan for their Classical Songs for Children, published in 1962. Although it barely moves out of G major, it could only be by Poulenc, even if the final cadence looks back to that of Ravel’s opera L’Enfant et les Sortilèges.

Poulenc himself was surprised that he had been so slow to return to Jean Cocteau’s writings after the Cocardes of 1919. When he did so, it was to immerse himself in the sombre, depressive side of the poet’s work – one that he understood all too well—firstly in La voix humaine of 1958, then three years later in La dame de Monte-Carlo (his 1962 incidental music for Renaud et Armide is lost). He enumerated the moods through which the desperate woman of the title passes: melancholy, pride, lyricism, violence and sarcasm; finally unhappy affection, anguish and suicide in the sea. In all this, he recognised the danger of monotony that lay in the music’s unyielding rhythm, a danger he countered by varying the harmonic colours. And the vocal style? That of Tosca’s ‘Vissi d’arte’! Not, then, a work for the faint-hearted, whether singers or listeners.