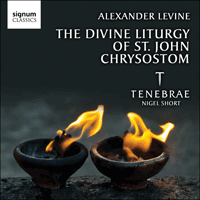 Tenebrae's latest album on Signum sees their return to the repertoire of Russian composer Alexander Levine. The Divine Liturgy of St John Chrysostom is Levine’s most significant large-scale religious work to date. Inspired by the humility and humanity of the murdered Russian priest (and friend of Levine) Fr. Alexander Men and composed over a three-month period of spiritual immersion, research and contemplation (similar to that described by his great forebears Tchaikovsky and Rachmaninov), the work traces a continuous spiritual growth towards the central point of the Liturgy—the Holy Communion.

'Tenebrae has already recorded another substantial work by Russian composer Alexander Levine (b.1955), Prayers for Mankind. They understand his soundworld and this makes for a polished and convincing rendering. Those listeners who, like me, have spent hours absorbing Orthodox divine liturgy settings by Tchaikovsky, Rachmaninoff and Tavener will find much to savour here. The language is tonal, often gentle and sustained, but always contrasted, deeply expressive of the sacred texts, and consistently rewarding, interpreted through the vibrato-free yet appropriately sonorous timbre of Tenebrae' (Choir & Organ)

'The journey started with a pilgrimage to the grave of Father Alexander Men at Novaya Derevnya near Moscow. 'When I returned to London', says Alexander Levine, 'I had a strong feeling that I should start composing the music for the Liturgy straight away … I thought about this journey as the spiritual experience of a person who one day comes to the church to participate in a liturgical service, where prayers and music would cast upon him the joy of unification in spirit with the divinity of God through Jesus Christ.' The resulting composition certainly achieves this numinosity, with echoes of Tchaikovsky and Rachmaninov. The chamber choir Tenebrae under the direction of Nigel Short is in superlative voice and the recording at St Augustine's Church in Highbury, London, is crystal clear' (Cross Rhythms)» More
'This is the first work by Alexander Levine (born in Moscow in 1955, now living in the West) I have heard. It follows the noble line of russian settings of The Divine Liturgy of St John Chrysostom by Tchaikovsky, Rachmaninoff, Gretchaninov, Kastalsky et al, expressed in a manner with which none of Levine's predecessors would have felt uncomfortable. If neither Levine's musical language nor style is 'modern', the genuine feel of the work is impressive. It is beautifully recorded and performed, although I suspect the final part, 'Blessed be the name of the Lord', would have benefitted from a slower tempo and a decrease in dynamic. But this remains an interesting and important album' (Musical Opinion)

The story
At the end of summer 2005, three years before I composed Prayers for Mankind, I went on a pilgrimage to the grave of Fr. Alexander Men: a Russian Orthodox priest who became an influential spiritual leader and the architect of religious renewal in Russia at the end of the Soviet period, as well as a dear family friend.

Novaya Derevnya near Moscow: I have not been there since 1992—the year I left Russia. This was the place where Fr. Alexander served in a small country church for around 20 years and where he is now buried. This return journey proved to be a great spiritual experience and determined the course of events that led me to composing the Divine Liturgy of St John Chrysostom. When I arrived at Novaya Derevnya and stood before the altar in the church, where Fr. Alexander served, I felt his vivid presence as if he stood before me alive, his famous smile beaming. It felt almost like a blessing. I didn’t know the exact meaning of this blessing, but its power and the miraculous feeling it evoked was so strong, that I felt a life changing force starting to emerge from within my soul. Upon my return to Moscow the following day, I already knew that I was going compose the music for the Divine Liturgy of St John Chrysostom.

When I returned to London, I had a strong feeling that I should start composing the music for the Liturgy straight away. I felt that if I didn’t do this there and then, the magic of the moment would slip away, and doing this at a later stage would result in something too far removed from my current insight.

During these days I had acquired a kind of mental picture: a vision of how the music would evolve throughout the work. It felt like neither a cognitively conceived construction—in the genre of this kind there is a traditional form of structure—nor an indirectly visualised sound image. I deliberately restrained myself from the process of sketching for a while. This particular moment felt as though something or someone—who in substance and power seemed far superior to anything I could possibly imagine—had kindly invited me for the journey on which I was about to embark.

I thought about this journey as the spiritual experience of a person who one day comes to the church to participate in a liturgical service, where prayers and music would cast upon him the joy of unification in spirit with the divinity of God through Jesus Christ. Hence, this idea of continuous spiritual growth towards the central point of the Liturgy, the Holy Communion—the ritual in remembrance of the Last Supper—was paramount for me.

Whilst working on the text, I consciously sought to refrain myself from the temptation of skilfully setting words to music, which is exercising one’s creativity for the sake of the procedure. Instead I was driven to follow that spiritual compass which allowed me to carry out the relentless search for mysterious revelations of the ancient texts.

My thoughts at that time were with the spiritual experience of my great compatriot composers of the past. Tchaikovsky for example, at the time when he was about to write his version of the Divine Liturgy, confessed to his friend of being “very humble” and venturing on this path “quivering with a mixture of uncertainty and hope”. We can safely assume that sacred works such as the Divine Liturgy could only be composed once in a lifetime, if ever. Rachmaninov wrote his version of the Liturgy on his return to Russia from a concert tour. He planned a short stay at his family estate in Ivanovka, and one day it came to pass that he decided to attend a Liturgy service at a local country church. This lead to an extraordinary (and now famous) outcome, as following the attendance Rachmaninov secluded himself in his cabinet-studio, emerging three weeks later with the score of his version of music for the liturgical canon.

The awareness of a granted ability to deliver the substance to this work was with me throughout the two month preparation period. It was a period of spiritual immersion, research and contemplation. Later, after the completion of the score and further reflection on the work, this feeling of deliverance continued to reveal itself and remained an invaluable and profound experience that affected and influenced my life on a deeper level. The score was completed in three months.

In autumn 2007 I showed the score to Valery Gergiev during one of his visits to London. The Maestro’s response was immediate: he wanted me to try out the Liturgy with the Mariinsky Opera Choir at one of his forthcoming Easter Festivals in Russia.

And I would like to thank Valery Gergiev for giving me the opportunity to introduce this work to a Russian audience and to perform the Liturgy with the Mariinsky Opera Choir over the next four years at his Easter Festivals 2008-2011. The Mariinsky Opera Choir under the principal chorus master Andrei Petrenko also premiered this work in St. Petersburg in June 2009 at the Church of the Saviour on Spilled Blood, and I would like to extend my gratitude to Andrei Petrenko for his support and expertise.

The music
The Divine Liturgy of St John Chrysostom comprises two major parts: the Liturgy of the Catechumens and the Liturgy of the Faithful. The musical material rigorously follows the liturgical textual canon. However, at some stage I decided that the choir should take upon itself some of the offerings that traditionally come from the deacon or priest during the service. Here the choir performs these lines with short single-vowel pedals intertwining in different voices, e.g. in the litanies, whereas during the traditional church service the choir is normally silent when those text lines are pronounced. Some of the offerings that one would expect to be delivered by the minister are also delegated to the choir, which is yet another detail that deviates from the traditional service routine, for example in the Great Litany and the Litany of Catechumens.

This objective reflects my view on some ethical aspects of liturgical service. The Greek word leitourgia which loosely translates as “public duty”, implicitly means a form of mysterious unification of serving priests and the congregation during the service, united in one universal scope of prayers, addressed to the Lord as well as to each and every human soul ever touched by the Divine Grace—whether they be a saint or sinner. I perceived the ethical values of liturgical prayers as being ecumenical in their essence (Matthew 28:19). They embrace a very basic feeling and aspiration in the soul of anyone, who through his instinct or faith is striving to receive the Divine quality of the Holy Spirit.

Thus, it became my serving motivation to amplify this notion through musical means. That is why the music of this Liturgy highlights different musical approaches found in Christian cultures across history from Greek or Byzantine chant, to medieval polyphony. The pervading influence of renaissance counterpoint and Byzantine chant alongside a poly-chord texture features prominently in this liturgy—however I was keen to avoid any direct quotations of music from these eras. My aim was to originate the music within the spirit of modern culture so that it would find its justification through the “collective language” of the world we are living in.

The work embraces 22 relatively short movements, and could be described as a sequence of litanies (Greek. Ektenés) in which the choir responds to the deacon’s prayer offering, antiphons and hymns, as well as some of the core movements—such as ‘Hymn to the Lord’, ‘Hymn to the Virgin’, the ‘Creed’ and the ‘Lord’s Prayer’. Some selected movements reflect the most important sacred mysteries such as ‘Anaphora’ and the ‘Holy Communion’. These movements are also divided into smaller sections (hymns).

One may find certain traces of references in the music though, such as the fragments of the Russian folk song At the Father’s gate, which I used in the ‘Creed’. This folk song was conceived in Leo Tolstoy’s imagination as a symbolic archetype of Russian muzhik and the symbol of the peasant population in its remarkable resistance to Napoleon’s Army during the occupation of Russia in 1812. Tchaikovsky also quoted this song in his 1812 Overture.

Having said all of the above, I feel that I have come to the most important part of this story: I would like to give my very special thanks to my close friend Pavel Lisitsin whose relentless support and help made this recording happen. I also thank Nigel Short and Tenebrae, Adrian Peacock, Nicholas Parker and Mike Hatch for their impeccable professionalism, creativity and support in working on this recording.