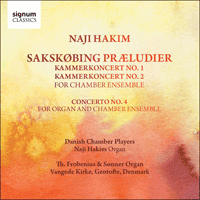 'Beirut-born French organist Naji Hakim, Messiaen’s successor at La Trinité in Paris, is also, like Messiaen, a composer, though of an entirely different cut. The four works here are a visit to a world you thought had disappeared. The Sakskøbing Preludier, based on a selection of Danish 'hymns for our time', are a kind of light music that would have been downmarket from Poulenc in the 1950s. The chamber concertos are in the same general vein, with some Eastern colouring in the first. But there’s a vim in the Fourth Organ Concerto that’s lacking elsewhere, and an offbeat fairground brio in its finale. The performances are marred by some off-colour string intonation' (The Irish Times)

At the initiative of Pastor Hanne Margrethe Tougaard and of organist Flemming Chr. Hansen, the Sakskøbing Church, Denmark released a CD of Danish hymns in September 2004 titled “Salmer til tiden—en musikalsk velkomst til den nye salmebog” (“Hymns for our time—a musical introduction to the new hymn book”). The Sakskøbing Præludier of Naji Hakim are based on some of these chorales, coming within the framework of an ecumenical approach and to pay a grateful homage to the Sakskøbing parish, to its organist and to its pastor. The work has been written in two versions: one for Organ and another for Chamber Ensemble.

The Preludes can be distinguished by characters full of contrasts, which accompany the poetic line of the texts of the hymns, the theological axis that underlies them and the liturgical time. They find their place as much in the liturgy as they do in the concert.

‘Mit hjerte altid vanker’ develops a dancing movement around the chorale of Carl Nielsen. Chimes, melismas, aksak rhythms (3+2+2) or toccata give the dominant colour of the cycle, emerging from the joy of Christmas. Expressive harmonies accompany the declamation of the tenor of ‘Nærmere, Gud, til dig’. In ‘O Gud, du ved og kender’ the cantus is counterpointed by a perpetual movement, an image of the confident Christian, carried by a compelling stream in the steps of Christ. ‘At sige verden ret farvel’ is an expressive, harmonic meditation full of chromaticism, facing the torments of death and the mystery of Redemption. ‘Hil dig, Frelser og Forsoner’ illustrates the loving and grateful thrust of the Christian soul towards the Crucified, Saviour and Consoler. One may figure in the perpetuum mobile of the middle section, a picture of the Eternal Joy in Christ. A relief of serenity and of light frames the majestic declamation of the tenor of ‘Den mørke nat forgangen er’.

Based on a Swedish popular melody, ‘Nu blomstertiden kommer’ offers a cheerful and dancing thanksgiving, in praise to the Creator. The Easter chorale par excellence in Denmark, ‘Påskeblomst’ is paraphrased harmonically here, with an ascending cadential progression and a crescendo culminating on the splendour of the Resurrection. The overflowing joy of ‘Op, al den ting, som Gud har gjort’ takes up again the character of the initial movement of the cycle and falls within the thrust of Psalm 150: “Let all that breathes praise the Lord”. The peaceful paraphrase of ‘O kristelighed’, conjugates the ABA form to the ornamental variation. The light writing of ‘Så vældigt det mødte os først i vor dåb’ symbolises the baptismal water and the encounter with the Beloved. ‘Befal du dine veje’ concludes the cycle in a popular and festive character, exuberant with joy.

Kammerkoncert No 1 was commissioned by the Danish Chamber Players / Storstrøms Kammerensemble, which has its seat at the Fuglsang manor in Lolland.

Kammerkoncert No 2 was commissioned by the Danish Chamber Players. It is inspired by Danish Christmas carols and follows the Italian concerto form in three movements—fast, slow, fast. The initial ‘allegro’ is based on Velkommen igen, Guds engle små (Welcome again, God’s small angels) and is developped in a song form. The middle movement, ‘andante’, is a set of variations on Dejlig er den himmel blå (Lovely is the blue sky). The finale is a bright and joyful paraphrase of Et barn er født i Betlehem (A child is born in Bethlehem) combining the characteristics of variation form and song form.

The Concerto No 4 for organ and chamber ensemble was commissioned by Philharmonie Essen. The title ‘Det strømmende og uudslukkelige…’ refers to the Holy Spirit as a streaming and unextinguishable source of eternal Life. The composition follows the structure of the classical concerto in three movements:

The opening movement, Strømmende, is based on two themes from Hakim’s other works : Det strømmende… canon for two voices (2005), on a text by Pastor Hanne Margrethe Tougaard and Capriccio for violin and organ (2004). The conclusive verse of Pastor Tougaard’s text Guds Ånd er Liv (Spirit of God is Life) is the point de départ of the whole concerto. The theme of the Capriccio is an appeal to the ‘Beloved’, to the image of God among us. The form combines the principles of variation and sonata, in contrasted textures and moods (energetic, singing, expressive, lively, humoristic).

The second movement, is based on the Danish hymn, Sorrig og glæde, folk melody (c1670) on a text by Thomas Kingo (1681). The music here represents the opposition between life on earth and eternal Life in Heaven. The different variations of this movement (expressive, ornamental, contrapuntal), draw a general ascending evolution, whether tonal or in the tempo.

The concerto reaches its climax in the dancing and joyful conclusive movement, ‘Uudslukkelig’. It is conceived as a plurithematic rondo-sonata based on Danish hymns, most of them in honour of the Holy Spirit. These include: Du, som går ud fra den levende Gud; Gud Helligånd, o kom!; Kom Gud Helligånd, kom brat; I al sin glans nu stråler solen; Se, nu stiger solen. The two themes of the opening movement are recalled in the coda. The conjunction of the organ to a chamber ensemble inspires a diversity in the soloistic parts for most of the instruments.