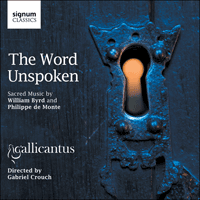 William Byrd, favourite of Queen Elizabeth I, was a confirmed and practising catholic who worshipped in defiance of the Queen. His status and perhaps even his life was preserved thanks partly to the undeniable mastery of his music, and to the fact that he was careful to maintain an output of music appropriate for a Protestant Rite (simple and English) as well as a Catholic one (florid and Latin).

Byrd was by no means the only major Catholic composer working in England during these years. Furthermore, there were English composers whose faith drove them to work abroad, as well as foreign composers who offered sympathy and encouragement to English catholics. Included in this latter category was the Flemish composer Phillipe De Monte who entered into a fascinating compositional correspondence with Byrd. Verses of Psalm 136 Super Flumina Babylonis (containing many allegorical references to the plight of catholics unable to practice their faith openly) were set to music and exchanged, in what is now seen as an encoded message of mutual support and friendship between brothers in faith.

The texts reveal the Catholic community’s sense of isolation (How shall we sing the Lord’s song in a strange land?—Quomodo Cantabimus) and bereavement (Jerusalem is wasted 'The Word Unspoken'Ne Irascaris), and the elaborate, poetic nature of the encoded messages distributed within it through music.

'Gallicantus explores Byrd's fascinating 'personal musical exchange' with Philippe de Monte in The Word Unspoken. Six Byrd motets sit alongside five by the Italian who, like Richafort, deserves to step out from under the shadow cast by giant contemporaries.The singing is beyond exemplary: deeply felt, tenderly phrased, perfectly balanced, with the most profound understanding, seemingly bred in the bone' (Choir & Organ)
'As a specialist early-music consort, Gallicantus are perfectly placed here to compare the works of William Byrd and Philippe de Monte—the one a Catholic recusant fortunate in the favour of Elizabeth I for his simpler Protestant pieces, the other a Flemish sympathiser and correspondent. Gallicantus render exquisitely the ornate verses of Byrd's Cantiones Sacrae, their interwoven timbres cascading in noble equilibrium; but the most direct comparison is between de Monte's 'Superflumina Babylonis' and Byrd's 'Quomodo cantabimus', both derived from Psalm 136, which subsequently gave the world Boney M's deathless 'Rivers of Babylon'. In this case at least, music is the winner, whichever one prefers' (The Independent)

'Culminating in beautiful performances of Byrd and Monte's famous collaboration (one might almost say commiseration) Super flumina Babylonis/Quomodo cantabimus, this album brings together some of Byrd's most agonized musical utterances with some surprisingly melancholy works by Monte' (Early Music Review)» More

The connection that brings together the music of William Byrd (c1540-1623) and Philippe de Monte (1521-1603) is a most unusual one: a very rare documented instance of two composers from distant parts of Europe engaging in a personal musical exchange. According to an 18th-century manuscript in the British Library, de Monte had come to England in 1554 as a singer in the choir that accompanied his employer, the Spanish king Philip II, as he contracted a dynastic marriage to Mary Tudor. It seems that de Monte may have made contact with the young William Byrd, for some 30 years later he sent him the eight-part motet Super flumina Babylonis, and the following year, Byrd responded with his own eight-part Quomodo cantabimus, whose words are drawn from verses of that same psalm, No 136. Exactly what occasioned this musical transaction is not known, but the words must have held particular resonance for Byrd at that time, as this famous psalm of captivity and exile would surely be interpreted as a barely veiled allusion to the dangerous situation that he and his fellow recusant Catholics were facing under a Protestant regime in England at a time when political tensions were aggravating the existing religious ones; perhaps word of these developments had reached de Monte, either in Prague or via his benefice at Cambrai, near the Catholic English College at Douai.

Apart from this musical exchange, the lives of William Byrd and Philippe de Monte must have been very different; living at opposite ends of Europe, they shared a common musical language and a Catholic faith, but perhaps not much else. The senior of the two by some 20 years, de Monte was by birth a northerner, born in Mechelen (now in Belgium), who went on to work for a succession of monarchs and nobility in various parts of Italy, and from 1568 onwards, at the Imperial courts in Vienna and Prague, until his death in 1603. He would have been acquainted with musicians from many European countries, and in turn his substantial corpus of published music would have reached a wide readership. It includes more than 1000 madrigals, as well as about 40 Masses and 250-odd motets, yet his music remains curiously under-represented in English-speaking countries today. Is that because in the public eye he has been somewhat overshadowed by his colleague and friend Lassus, or because his musical style avoided the mannerisms and chromatic extremes of some of his contemporaries, or because he was not made into a legend after his death (like Josquin, or in the next generation, Palestrina)? Or simply because few of his works are available in good performing editions?

In so far as one can surmise from a distance of several centuries, the two composers were very different in temperament too. Byrd, without doubt the pre-eminent English composer not only of his generation but of many others too, was learned and astute, surviving unscathed as a recusant against considerable odds, and engaged in seeing his music through the newly established printing press; he was also involved in a number of protracted legal disputes over land and money. By contrast, de Monte was described as a ‘quiet, unassuming man’ by the Imperial Vice-Chancellor, Georg Seld, who also declared him to be ‘the best composer in the entire country, particularly in the new manner and musica reservata’.

The intensity of one notable element of de Monte’s writing was articulated by the Italian writer Pietro Cerone in ‘El melopeo y maestro‘ (1613), who declared that the composer liked to use ‘very pleasant and very sweet chromatic progressions’, ‘soft, sensuous and effeminate ones’. This comment is especially apposite to the eight-voice motet O suavitas et dulcedo (1575), where the serenity of the devotional text is perfectly reflected in spacious and expressive music, the voices occasionally coming together in block chords, to emphasise the words, as at ‘rogo te, piissime Jesu’.

Elsewhere, de Monte often selected verses from the psalms for his motet texts, always matching their sentiments with his musical invention. Domine, quid multiplicati sunt (whose text is compiled from verses extracted from psalms 3, 21, 141 and 37), Voce mea ad Dominum clamavi (verses from psalm 141) and Miserere mei, Deus (psalm 56) were all included in de Monte’s fifth book of motets, published in Venice in 1579. The opening of Miserere mei, Deus is especially memorable for the sequence of closely spaced suspensions and resolutions that sets the mood of this penitential text. In Super flumina Babylonis, de Monte writes for two four-part choirs, often used antiphonally, whereas Byrd, in Quomodo cantabimus, generally uses the eight voices in contrapuntal fashion, including a skilful canon (with one voice in inversion) between three of them in the first half of the piece.

Quite how different Byrd’s perception was becomes immediately apparent even by a glance at the titles of his motets recorded here: all have non-liturgical Latin texts, carefully chosen to express particular thoughts. In his unique position as holder of a monopoly for printed music in England, Byrd was able to publish collections of Cantiones Sacrae (1589 and 91) that contained a number of ‘political’ motets of this kind, despite living under a Protestant regime and continuing to hold an official post as Gentleman of the Chapel Royal, the monarch’s own musical establishment. While some of his music, notably the ‘Great’ Service, was clearly written with the Chapel Royal’s exceptionally large resources in mind, the major part of his output of sacred vocal music consists of Latin works that were certainly not suitable for such a place: three Masses, a comprehensive collection of Mass Propers (Gradualia), and three volumes of Cantiones Sacrae (the first one jointly with Tallis, in 1575). According to William Weston, one of the Catholic priests who returned to England in the 1580s, Byrd ‘had been attached to the Queen’s chapel, where he had gained a great reputation. But he had sacrificed everything for the faith—his position, the court, and all those aspirations common to men who seek preferment in royal circles a means of improving their fortune’. Though he retained his place at the Chapel Royal for the rest of his life, Byrd’s attendance would have been rare after he moved out to Stondon Massey, Essex, in 1593. Here he elected to live near the Ingatestone estate of Lord Petre, the Catholic patron to whom the second part of Gradualia was dedicated, in a place of relative safety.

Only a handful of the 1589 and 91 Cantiones Sacrae present cheerful texts, the majority taking as their subject matter the hardships of the faithful, their communal afflictions and their pleas for divine assistance. The language in which these sentiments are expressed, with its repeated references to Jerusalem, the Babylonian captivity and the suffering of exile, was first discussed by Joseph Kerman in the 1960s. Since then, his own subsequent writings and those of Craig Monson have illustrated and underlined the degree of reference that many of these texts make to contemporary Jesuit writings, identifying a ‘common language [that] helps explain how Byrd (or his patrons or priests) came to choose many of his texts,…and also how such texts would have been ‘heard’ by Byrd and his fellow Catholics’. Several of these works were circulating in manuscript as early as 1580, and we may assume that their coded messages—their unspoken words—were understood by those who sang them—most probably a small ensemble in the home of a Catholic patron. No English composer had produced anything like this before.

Nowhere in Byrd’s considerable output is his mastery of rhetoric more evident than this selection of Cantiones Sacrae, which are all substantial works: Tribulationes civitatum runs to three sections, and Vide, Domine, Ne irascaris and Tristitia et anxietas to two. The technique of developing a motif through subtly modified re-iteration is perfectly judged, with some notable phrases highlighted either by repetition in homophonic chords—‘Domine, miserere’ and ‘aperi oculos tuos’ (Tribulationes civitatum), ‘Sion deserta facta est’ (Ne irascaris), ‘omnibus dico’ (Vigilate)—by an unexpected and significant harmonic turn, as at ‘facta est desolata’ (Vide, Domine), or by reserving the use of an extra note above the normal tessitura for final emphasis, as at the conclusion of Tribulationes civitatum. But on occasion Byrd was equally capable of adopting a more literal vocabulary, which suited the rather graphic conceits of Vigilate, from the sleepy descending ‘dormientes’ to the vigorous rising scales of cock-crow, ‘gallicantu’. An ensemble named ‘Gallicantus’ could hardly not programme this motet!