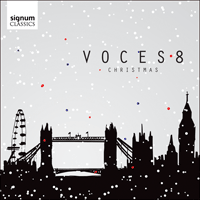 'Voces8—smart-suited, slickly branded, but can they sing? Yes: this selection of arrangements for eight voices shows the group's undoubted vocal pedigree (it was founded by ex-Westminster Abbey choristers)' (BBC Music Magazine)

'Another winner from Signum is Voces 8's Christmas. As the name implies, these are eight young singers: two sopranos, two counter-tenors, two tenors, a baritone and a bass, who present a cappella arrangements of popular carols, with verve and finesse. I loved hearing such familiar stuff dressed up in new ways that are invariably sophisticated and sensitively done' (Daily Mail)

Voces 8: Christmas was conceived as a heart-warming selection of the ensemble’s favourite seasonal music. Drawing on the themes of the Virgin Mary, the Wise Men, the Nativity, jubilation and festive cheer, Voces 8 chooses to present an array of works influenced by the group’s inimitable zest for performance and love of all periods and styles of music.

Voces 8: Christmas would not be complete without a selection of Jim Clements’ signature arrangements. Each of his three carol settings featured on this album has a melody unmistakably associated with Christmas. The first of these, the child-like tender lullaby Away in a manger, is amongst the most famous of all carols. I wonder as I wander started life as a fragment of a song collected in 1933: folklorist and singer J. J. Niles heard a girl sing just a single line of the song and extemporised on it to give us the tune we know and love today. In Jim’s arrangement, this beautiful undulating melody, sung first by itself, opens up into broad and warm harmony, drawn along by some of the most beautiful lyrics in all of the English language. Towards the end of the carol the melody winds round itself in canon, making it seem almost endless. By the end it is broken into fragments, reminiscent of those that J. J. Niles first heard in 1933.

Gabriel’s message is a Basque Christmas folk carol about the Annunciation to the Virgin Mary. The sonorous opening chords and expansive accompaniment to each solo suggest the angelic nature of the announcement. Jim chooses the final word of the chorus, ‘Gloria’, to open the carol, as the arrival of Gabriel is heralded by the angelic choir. The members of Voces 8 perform this carol with particular fondness as it comes from the Basque region of Spain, where the ensemble spent much time in the early years of the group and cherish many memories.

This Marian theme continues with Jean Mouton’s masterful canonic setting of the Antiphon for the Octave of the Nativity, Nesciens mater. Although the unfolding of the four canons is exquisite, it is the conclusion of the piece, ablaze with reverence for the Virgin Mother that really excites Voces 8. Contrastingly homophonic is Henryck Górecki’s imploring and prayerful Totus tuus, written in 1987 to celebrate Pope John Paul II’s pilgrimage to his native Poland (of which Mary is the patron saint). Alongside these two giants, three more intimate contemplations of Mary are featured. Many carols of the middle ages use the rose’s precious holiness as a symbol of Mary, but none more beautifully than There is no rose of such virtue. This symbolism, and the sweet modal harmonies of carols such as this, must have influenced Graham Lack, whose Lullabies, Jesu, swete sone dear and At the manger Mary sings are intimate monologues of Mary. In opposition to these is an arrangement of the mediaeval Coventry Carol, which, although a lullaby, is full of foreboding and woe at the future of the new-born infant king.

There can hardly be a more strident and glorious setting of the most famous Marian text of all than Michael Praetorius’ Christmas Magnificat quinti toni, found in the second volume of Cantiones Sacrae (1599), alongside In dulci iubilo. These rich and exuberant double-choir settings allow the eight voices of the ensemble to shine in resplendent choral interplay. More subtle and discrete are three carols dependent on the marriage of text and song, and written by composers of the nineteenth and twentieth centuries: Warlock, Cornelius and Walton. The song-like nature of Bethlehem Down and The three kings, the latter featuring a solo bass-baritone, is unsurprising given the accomplishments of both Warlock and Cornelius as solo song writers.

In contrast the more grand and theatrical nature of What cheer? hints at Walton’s mastery in the genres of oratorio and symphony and really appeals to Voces 8’s passion for the theatrical. More familiar is Once in royal David’s city, which first achieved its iconic place in 1919 when it was sung at the opening of the first Festival of Nine Lessons and Carols at King’s College, Cambridge, and now heralds the beginning of Christmas for people all around the world. Since that performance it has become tradition for the first verse to be sung by a solo chorister and the second verse by the choir. Voces 8’s arrangement pays homage to this, but develops the carol in true a cappella style with a close-harmony final verse and descant written by Composer-in-Residence, Thomas Hewitt Jones. Ding dong merrily on high first appeared as a branle melody, a secular dance tune from twelfth-century France, named for its characteristic side-to-side movement (from the French branler, ‘to sway’). It is often stated that the carol’s lyricist, George Woodward (1848-1934), found inspiration for the text in his keen interest in church bell ringing, but the origins of this melody must have played just as important a part: ‘Let steeple bells be swungen’.

Finally, we come to the festive season full of expectation. The sense of anticipation of the Epiphany journey is illustrated by Francis Poulenc in two motets, O magnum mysterium and Videntes stellam, both taken from his Quatre Motets pour le temps de Noël. Poulenc’s writing is gloriously evocative of the magic of the Magi on a starlit night and of the rich aroma of frankincense and myrrh.