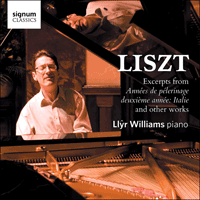 Pianist Llyr Williams is an acclaimed soloist, accompanist and chamber musician who, for his second disc, chose to focus on virtuosic selections from Franz Liszt. Highly sought after as a performer in the United Kingdom, he was awarded a South Bank Sky Arts Award in 2012 for his Beethoven Sonata Cycle at Greyfriars Kirk in Edinburgh the previous year—where he performed all 32 sonatas in just two weeks

'Pèlerinage highlights from Wales's pre-eminent pianist' (Gramophone)
'The musical demands presented by any Liszt programme are so wide-ranging that nor even a pianist of Llyr Williams's class will necessarily succeed in meeting all of them, all of the time. By the same token, there will be plentiful areas that do succeed, and brilliantly' (BBC Music Magazine)» More

'The core of Llyr Williams' recital disc is a selection of five pieces from the second, Italian, book of Liszt's Annees de Pelerinage—the little Canzonetta del Salvator Rosa and the three Petrarch Sonnets, leading up to the great, climactic Dante Sonata. As he also showed in his Edinburgh festival recital last week, Williams is a superb Liszt interpreter, never content to use even the most technically demanding music as just a vehicle for flashy display, but always looking beneath the elaborate surfaces for deeper rigour and meaning. That doesn't mean he ever understates the music's sense of theatre or misjudges its sense of scale, though; there's a tremendous power and intensity to his Dante Sonata that's maintained from the taut opening phrases to the very final bars. He prefaces his sequence with the Tarentella that ends Venezia e Napoli, Liszt's supplement to the Italian Annee, and adds the Bénédiction de Dieu dans la Solitude and the transcription of the Liebestod from Wagner's Tristan und Isolde as mighty, powerfully wrought postscripts' (The Guardian)

Franz Liszt (1811–1886) was one of music’s great travellers. For many years he was constantly crossing and re-crossing Europe in his role as the greatest piano virtuoso of his age, moving restlessly from concert and salon, city and countryside and from country to country, continually seeking sensation and inspiration. In his own person he was that powerful Romantic archetype, the artist-wanderer; and the idea of the journey, and of absorbing new experiences, both emotional and artistic, along the way, came to be built into many of his works—especially the piano works, which could be at once public bravura showpieces and a kind of imaginative private diary.

This aspect of Liszt’s psyche is seen with particular clarity in the three collections of pieces that he published under the overall title of Années de pèlerinage (Years of Pilgrimage): the first ‘year’ dealing with Switzerland and the other two with Italy. Romantic in conception and autobiographical in essence, they form a kind of musical equivalent to that key-work of literary romanticism, Lord Byron’s Childe Harold’s Pilgrimage. Liszt’s première année: Suisse began life in a more miscellaneous collection entitled Album d’un voyageur composed in 1835–38 (sub-groupings of which were labelled Impressions et poésies and Fleurs mélodiques des Alpes), but was thoroughly revised and recast as the first book of Années de pèlerinage between 1848 and 1855. In the meantime Liszt had begun composing the deuxième année: Italie, a process that occupied him between 1839 and 1849. The third of these collections, the troisième année: Italie is a much later work put together between 1867 and 1877, by which time Liszt was spending roughly a third of every year resident in Rome, dividing his remaining time between Hungary and Weimar. This ‘vie trifurquée’ would be the pattern of his existence until his death.

Whereas the première and troisième années draw their varied inspiration largely from landscape and the sense of place, the deuxième année—from which Llyr Williams’s programme on this disc is largely compiled—was inspired more by the Renaissance art and literature of Italy which caused Liszt such excitement as he discovered it. This took place largely in 1837–9, when he spent the summer of 1837 at Lake Como with his mistress, the Countess Marie d’Agoult, and that of 1838 in Genoa, frequently visiting other Italian cities where he contemplated the sculpture and paintings of the Italian Renaissance. The process continued as they passed the winter in Florence and finally settled in Rome for three months.

In about 1840 Liszt composed an independent four-movement suite inspired by his Italian travels, entitled Venezia e Napoli, which ended with a movement he called Tarantelles napolitaines. Nearly 20 years later he took this work in hand, jettisoned two movements, revised the other two, and added a new one to make three movements in all; then he published it as a ‘Supplément’ to the deuxième année of Années de pèlerinage. Though each of the three movements evokes Venetian or Neapolitan folksongs and dances, the original composers (or collectors) of the melodies are known (one movement uses a theme from Rossini’s Otello), and the brilliant Tarantella that opens this programme, which has become deservedly popular, is a virtuoso concert paraphrase based on themes collected by the French-born Italian composer Guillaume Louis Cottrau (1797–1847).

The Canzonetta del Salvator Rosa is a raffish, devil-may-care marching song based on a poem attributed to the 17th-century painter, printmaker, poet and adventurer Salvator Rosa (1615–1673), seen in the 19th century—perhaps partly due to his portrayal in ETA Hoffmann’s novella Signor Formica (1819)—as the archetypal rebellious artist; the tune is not by Liszt himself but by Giovanni Bononcini (1670–1747). The three Petrarch Sonnets were originally songs for voice and piano which Liszt composed to the Petrarch texts in 1844–45. In 1846 he issued a solo piano transcription of them, but in around 1854 revised this thoroughly for incorporation in the deuxième année. As finally re-cast, they seem like ideally idiomatic piano music, though Liszt printed the full text of each sonnet at the head of each piece.

The seventh and final work of the deuxième année, and in every way its climax, is the so-called Dante Sonata (officially Après une lecture du Dante, fantasia quasi sonata), which remains one of Liszt’s most powerful keyboard utterances. It began life, according to the journal he was keeping in 1838-9, as a plan for a ‘fragment dantesque’ inspired by Dante’s Divine Comedy, which he and Marie d’Agoult had been reading together. This early form was sketched in September 1839 and premiered by Liszt in Vienna on 5 December that year, under the title Fragment nach Dante. Revised and expanded in 1849, it became the work we now know.

The title Après une lecture de Dante derives from a poem by Victor Hugo, but Liszt had hoped to capture in music the ‘strange tongues, lamentable cries, words of pain and tones of anger’ of Dante’s Divine Comedy. He would of course later compose a Dante Symphony on a far larger scale, but the ‘fantasia quasi sonata’ conveys the essence of his feelings about Dante’s work in brilliantly compressed form. The declamatory opening, based appropriately on the ‘diabolus in music’, the interval of the augmented fourth or tritone, seems to evoke the inscription above the gates of Hell (‘abandon hope all ye who enter here’) and introduces a demoniac Presto agitato. Against this is posed a celestial chorale, and the two ideas contend until the music arrives at a central slow section marked dolcissimo con amore: here Liszt depicts the tragic predicament of the lovers Paolo and Francesca, also depicted in Tchaikovsky’s tone-poem Francesca da Rimini. In the final section of the work Liszt piles on a breathtaking array of keyboard effects in which we seem to hear the relentless storm-winds of the Inferno.

Liszt laboured for 18 years over his collection of ten piano pieces entitled Harmonies poétiques et religieuses, partly inspired by the volume of poetry of the same title by his close friend, the poet Alphonse de Lamartine (1790–1869), published in 1830. Finally issued in 1853, this too numbers among his most important piano works. Bénédiction de Dieu dans la solitude, which refers specifically to one of Lamartine’s poems, is the third piece in the cycle, and the first to be cast on a large scale. Liszt headed it with Lamartine’s lines ‘Whence comes, O God, this peace which overwhelms me? Whence comes this faith with which my heart overflows?’, and chose the key of F sharp major, for him always a liquid and ecstatic tonality, for this supreme essay in pianistic contemplation, which anticipates the essays in mystical serenity of César Franck and Messiaen. The broad, serene unfolding of the principal theme creates an atmosphere both spiritual and voluptuous. The melody often appears in the inner voices and, along with the constantly-changing accompanimental figures and perfectly-composed rubato, the piano itself seems to partake of the act of spiritual thanksgiving. After a heady Andante interlude and a passage of desolate lament, the opening theme returns and builds to a passionate climax, only to dissipate in crystalline reflections. The coda recalls former themes but issues at last in a chorale of calm thanksgiving.

Not only was Liszt a supremely original composer for the piano, but an inspired transcriber of other composers’ works. In a sense his transcriptions, too, are autobiographical, for they take up and transform music that he was listening to on his European travels, in some cases by friends and colleagues. This is certainly true of his transcriptions of passages from the operas of Wagner, whose music Liszt championed throughout his career and who, through his affair with (and eventual marriage to) Liszt’s daughter Cosima, became a close family member, though their relations were often strained.

Liszt’s many pianistic transformations of Wagner occupied him at various times between the 1850s and 1870s. His version of Isolden’s Liebestod from Tristan und Isolde was arranged in 1867, only a few years after the opera’s premiere, and revised in 1875. In 1867 his relations with Wagner were anything but harmonious, but the care Liszt lavished on this transcription is testimony to his abiding admiration of Wagner’s genius and his own selfless generosity. The ecstatic nature of the piece would obviously have appealed to Liszt, who here, without changing or adorning the original, magically reimagined Wagner’s orchestra in an intricate and delicate web of keyboard texture that requires a true virtuoso to make its intended effect.