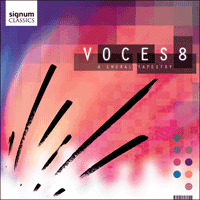 International award-winning octet Voces8 has established itself as the foremost young British a cappella vocal group. Performing a repertoire ranging from Renaissance polyphony to unique jazz and pop arrangements, the group has been praised for stunning performance, exquisite singing and creating a sound that spans the entire range of vocal colour. 'A Choral Tapestry' explores the rich vocal timbres of sacred vocal music spanning five centuries. Interweaving genres create an ethereal sonic tapestry that centres around the haunting beauty of William Byrd's Mass for Four Voices. The programme includes anthems and motets from the English Chapel Royal, the Sistine Chapel in Rome and St. Thomas' Church, Leipzig.

'The award-winning group Voces8 is well-known for its wide-ranging programmes and accomplished technical control … in Monteverdi's Cantate Dominum, the voices dance with incredible lightness, and the bell-like soprano voice of Andrea Haines provides the icing on the cake' (BBC Music Magazine)» More

'The pure, refined balance of Voces8 is to be heard nowhere on this disc to better effect than the opening number, Bruckner's Os justi. Recorded in Brinkburn Priory, Northumberland, this mixed bag of a cappella favourites includes Byrd, Monteverdi, Victoria, Palestrina and Gibbons, as well as rarer items by Reger, Brahms and Rheinberger. Tavener's song of innocence, The Lamb, is the only original contemporary composition. What appears at first as a rather arbitrary sequence, on closer inspection unfolds as a very satisfying programme, albeit one in which the recording is perhaps a little too closely miked' (Choir & Organ)

A Choral Tapestry reflects Voces 8’s diverse musical influences. The album aims to present both the music itself and the personalities involved in its creation and performance. In an exploration of complementary and contrasting sound worlds, harmony, text and vocal forces, Voces 8 creates a sonic tapestry, weaving together individual voices and music to create this performance. The ensemble enters into a dialogue with the music, seeking to present its vision whilst allowing the listener freedom for individual engagement. For the recording’s commissioned artwork, Voces 8 invited the artist to visualise his response to this performance in the hope of further stimulating the listener’s interaction with this inspirational music.

The simple F major chords that open this recording have an interesting history. Bruckner’s motets are part of the Cecilian Movement of reform that advocated the revival of Gregorian chant and Renaissance polyphony within the Catholic Mass. Composed in the Lydian mode and concluding with a plainsong alleluia, Os iusti is a compositional masterpiece that satisfies all the technical, stylistic, melodic and harmonic requirements of the movement. Also drawing upon historical influences, Das Agnus Dei and Wir glauben an einen Gott are taken from Reger’s eight Geistliche Gesänge. In the context of A Choral Tapestry, a new sound world is created by Reger’s adoption of the Lutheran chorale-like texture with a romantic harmonisation.

Composed in 1879, Brahms’ motet Warum ist das Licht gegeben is the central work of A Choral Tapestry. The music comprises a combination of words from the Bible and Martin Luther, much like J.S. Bach’s Motets. In fact, Op 74 from which the motet is taken is dedicated to the Bach scholar Philipp Spitta. Voces 8 considers the influence of Bach on Brahms’ mastery of form and counterpoint, choosing to perform the opening movement by alternating tutti chordal interjections of ‘Warum’ with solo counterpoint. The motet concludes with the Dorian chorale Mit Fried und Freud ich fahr dahin, the Lutheran translation of the Nunc Dimittis.

Written for double chorus, Brahms’ Fest- und Gedenksprüche (Op 109) were first performed in 1889 on the day Brahms was made a freeman of Hamburg. Brahms’ Venetian-style antiphony creates an uplifting magnificence and grandeur that captures the patriotic sentiment of national festivals, exactly the occasions for which Op 109 were intended.

Two African-American spirituals follow Brahms’ and Reger’s Lutheran chorale textures. In Go down Moses the description of God’s command for Moses to demand the release of the Israelites from slavery in Egypt represents the relationship between slave and slave-master. The drama of Tippett’s F minor setting is achieved in the contrast between the powerful unison, singing God’s command to ‘Let my people go’, the bass’s solo narration and the solo soprano’s anguished cry for release. Steal away, by contrast, is a message of hope and aspiration. An arresting bass solo announces God’s call to a new world whilst a searching solo soprano ascends an octave to a high E, ever closer to ‘home’. In direct contrast to Tippet’s sombre F minor, this setting of Steal away is in E major, a bright key with transcendental connotations, creating a sound world that perfectly illustrates the essence of this text.

A similar sentiment is expressed in the beautiful melodic counterpoint and shimmering homophony of Victoria’s O magnum mysterium. The motet unfolds organically towards triple-time alleluias with a resulting stillness that perfectly expresses the awesome text. In Palestrina’s Magnificat primi toni antiphonal interplay between two SATB choirs communicates the rejoicing worship of the Magnificat. With increasing momentum the musical phrases are passed between the four-part choirs before the voices unite in a grand eight-part finale for the concluding Amen.

Also a song of joy, the comprehensive presentation of compositional techniques in Orlando Gibbons’ anthem O clap your hands displays great skill, fitting for its premiere at the composer’s doctoral graduation ceremony. In line with the English Cathedral choral tradition, Gibbons writes for eight individual voices in sections of complex polyphony, double-choir antiphony and detailed word painting that illustrate each verse of Psalm 47.

Published in Byrd’s 1589 Cantiones Sacrae, his motet Vigilate is thrilling in its dramatic madrigalianisms. Voces 8 delivers the motet’s cautionary text with flair and drive, a colour which can also be found in Monteverdi’s 1620 madrigalian setting of Psalm 98, Cantate Domino. This Psalm’s description of music and singing is brought to life through Monteverdi’s joyful antiphony, instrumental-like textures and vocal melismas.

The Kyrie and Agnus Dei from William Byrd’s four-part Mass frame A Choral Tapestry. Unlike his Protestant writing, these Catholic works are in Latin and embody the complex compositional techniques reminiscent of music discouraged by the Reformation. The contrast between Byrd’s introspective and melodic counterpoint in the Mass, and Gibbons’ joyful declamation of Psalm 47 in the language of the Anglican congregation, reveals a required difference in style and message that is evident within Byrd’s own Catholic and Protestant compositions. The earliest of Byrd’s Mass settings, and inspired by his own fervent Catholicism, the four-part Mass is particularly expressive. The Agnus Dei is preceded by John Tavener’s song of innocence, The Lamb, and Rheinberger’s Abendlied, a prayerful committal to the evening. Voces 8 considers the intense and pleading suspensions of ‘dona nobis pacem’ that close the Agnus Dei to be a truly fitting conclusion to A Choral Tapestry.