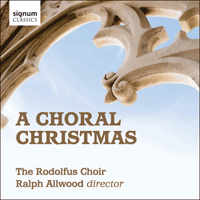 'The freshness of attack you get with younger voices is put to incisive use by conductor Ralph Allwood, whose Rodolfus singers are all products of the famous Eton choral courses. Parry's Welcome, Yule! can seldom have had a more sheerly ebullient performance, but the choir also brings formidable precision of pitching and ensemble to quieter settings, such as Tavener's The Lamb and Poulenc's O Magnum Mysterium. Some of the emotional deepening which comes with vocal maturity is occasionally missing, but there are many qualities here that compensate' (BBC Music Magazine)

'This beautifully sung sequence ranges through 500 years of Christmas music, with a bias towards the twentieth century and some of the exquisite carols and anthems composed by the likes of Vaughan Williams, Holst, Morten Lauridsen and John Tavener. The mood is one of quiet reflection rather than overt jubilation, although Parry's Welcome, Yule! and Tavener's rhythmically punchy Today the Virgin are exceptions. but there is a broad spectrum of texts and technique to lend the programme stylistic variety' (The Daily Telegraph)

'From Signum comes A Choral Christmas, a fine collection of largely unfamiliar seasonal music from the Rodolfus Choir conducted by Ralph Allwood, who has recently stepped down after 26 years as Eton's director of music. His choir are youngsters, aged between 16 and 25, who applied for choral scholarships at the college. Their discipline and diction throughout a testing programme is exemplary' (Daily Mail)

There is a certain timeless quality to some of the most beloved choral music in the English repertory. Consider the simple yet effective anthem by Thomas Ravenscroft, Remember, O thou man. His use of a very modern-sounding ‘crushed note’ effect in the repetition of ‘thou’ makes him sound a plausible contemporary with such Tudor-loving 20th-century composers as Warlock or Walton. Yet this is a genuine Tudor piece by a composer who died in 1635. It seems appropriate, then, that this CD also includes a madrigal by one of England’s greatest Tudor masters, William Byrd (died 1623), Lullaby, my sweet little baby, in which the Virgin Mary comforts her child in the wake of the slaughter of the innocents. One of Byrd’s popular works, it enjoyed a wide circulation in various arrangements during his lifetime.

But it was not only the Tudor composers that inspired English composers in the last century. Gustav Holst (1874-1934) also found inspiration in the motets of the Spaniard Tomás Luis de Victoria (died 1611) while striving to escape the hothouse atmosphere of Wagner’s music to which he had been in thrall as a budding composer; Giovanni da Palestrina (c1525-94) served a similar purpose for Herbert Howells when he was composing such works as his a cappella Requiem. Included here are Victoria’s grand setting of the Ave Maria for eight-part double choir, first published in 1572, and Palestrina’s Alma redemptoris mater, one of his most serene compositions from roughly the same period.

Holst’s close friend and colleague Ralph Vaughan Williams (1872-1958) first became heavily involved in writing music for the church in 1904 when invited to edit the first publication of the English Hymnal. Just the previous year he had discovered authentic English folk song in the Essex village of Ingrave, where a labourer called Charles Potiphar sang him the folksong Bushes and Briars. Vaughan Williams’s subsequent deep involvement in collecting English folk song profoundly influenced his own music, including his work on the English Hymnal for which he composed such well-loved hymns as Come down, O Love Divine, He who would valiant be, and Sine Nomine (For all the Saints). The truth sent from above was a folk song Vaughan Williams arranged just a few years after his work on the Hymnal, and shows his characteristic ability to combine the melody with harmonies which echo the style of the Tudor composers he so admired.

Holst shared Vaughan Williams’s enthusiasm for English folk song and Tudor music, as is evident in his touching setting of the medieval lyric Lullay my liking. Yet this was not based on any folk song but an entirely original composition which he wrote in 1916 for his students from Morley College and St Paul’s Girls’ School, who regularly joined forces to perform at the Whitsun Festival held at the magnificent medieval church of Thaxted during World War I.

Just a year later, Holst and Vaughan Williams’s erstwhile teacher, Hubert Parry (1848-1918), composed his carol Welcome, Yule!, setting a text from the same medieval anthology from which Holst had taken his text for Lullay. Both Holst and Vaughan Williams had first learnt their skills in flowing vocal counterpoint from Parry, and something of the spirit of the Elizabethan madrigalists haunts the textures of Parry’s jaunty setting.

Vaughan Williams’s influence spread widely across English church music, notably in the work of Herbert Howells, and also in the work of the lesser-known Philip Radcliffe (1905-86). A shy and sensitive university lecturer, Radcliffe spent most of his life within the haven of King’s College, Cambridge—home of the internationally renowned choir and the annually broadcast service of Nine Lessons and Carols. Radcliffe once described his style as ‘Brahms-Vaughan’, and you can hear in his carol The Oxen a certain harmonic poignancy which he shared with the senior English composer.

Kenneth Leighton (1929-88) was perhaps the last representative of the choral line started by Vaughan Williams and Holst, sharing something of their astringency in his mature choral works. However, in Lully, lulla—composed when he was 18 and poignantly setting the same subject matter as Byrd’s Lullaby, my sweet little baby—the greater influence was Howells, evident in the sensuous harmonies which become jazzy in the final cadence of Leighton’s setting.

Standing slightly to one side of this tradition was Peter Warlock (1894-1930), who though he also admired the Elizabethan composers often feigned to despise what he claimed to be the amateurish technique of Vaughan Williams and his followers. Fastidious in his approach, he composed relatively little but produced several outstanding works of which Bethlehem Down is widely regarded as one of the finest carols in the English repertoire. Another fine masterpiece by another fastidious composer is Jesus Christ the apple tree by Elizabeth Poston (1905-87), who early in her career received encouragement from Warlock.

Curiously, some of Warlock’s more elliptical harmonies approach the style of French choral works such as those by Pierre Villette or Francis Poulenc (1899-1963), whose setting of O magnum mysterium seems to evoke both the mystery of Christ’s appearance within a stable, and the chill of a winter’s night. Dealing with a similar scene is Ecce puer, composed in 1994 by Chris Chivers (born 1967): from 1989-94 he was the lay chaplain, housemaster and chorister’s tutor at King’s College School, Cambridge whose choir certainly inspired his work.

Yet another setting of O magnum mysterium comes from the American composer Morten Lauridsen (born 1943): more serene than Poulenc’s, the music’s added-note harmonies create the effect of sunlight bursting from behind more conventional chords. Youngest of all composers presented here is another American, Eric Whitacre (born 1970), who began making his reputation as a choral composer in his 20s. Lux aurumque (Light and Gold) is one of his most popular works, setting a poem by Edward Esch which Whitacre had translated into Latin by the American poet Charles Anthony Silvestri. The music shows a kinship to the ecstatic style of John Tavener.

Tchaikovsky (1840-93) may at first seem something of an interloper in this company, yet curiously there is an English link to his Legend, otherwise known as The Crown of roses. The text, telling how the Christ-Child in his garden is crowned with thorns by children who have taken all his flowers, was translated into Russian from Richard Henry Stoddard’s poem Roses and Thorns. Tchaikovsky had originally set this for high voice and piano in 1883, yet such was its success that in 1889 he made an a cappella choral version, as performed here, for the chorus of the Imperial Opera in Saint Petersburg.

Tchaikovsky revolutionised Russian church music with his setting of the Liturgy of St John Chrysostom, which broke the Orthodox Church’s monopoly on liturgical settings. Yet in some ways the Englishman John Tavener (1944-2013), who converted to the Russian Orthodox Church in 1977, has reverted to a pre-Tchaikovskian style of music: more meditative and much influenced by the bass drones of Greek Orthodox music, the latter evident even in his relatively lively Today the Virgin. Somewhat outside that tradition is his setting of William Blake’s The Lamb, where the initial soprano line is mirrored to piquant harmonic effect, followed by the balm of the harmonious full chorus.