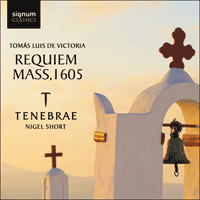 Tomás Luis de Victoria's requiem mass for six voices, written in 1603 and published in 1605, is a masterpiece. It is one of a handful of large-scale works which enjoys mainstream appeal in the 21st century. For many, it represents what Renaissance polyphony is, what it sounds and feels like, and how expressive it can be. The album also features two well-known works by Victoria's contemporary Alonso Lobo.

'The Kyrie from the Requiem Mass of 1605, from Tomás Luis de Victoria and the sound of Tenebrae, directed by Nigel Short, who’s sung this music himself many times with King’s Singers and the Tallis Scholars. But there is an intensity, an emotional range, Tenebrae seems to be able to draw on that makes this really special alongside the purity and accuracy we’ve come to expect from this very versatile ensemble. To find ourselves on the jury putting forward two of their recent recordings to the public vote just proved the point, it could have been their disc of Parry’s Songs of Farewell, but it was the Victoria that won the day' (BBC Music Magazine)» More
'Victoria’s Requiem Mass is one of the acknowledged masterpieces of Renaissance choral polyphony, and Tenebrae here exquisitely conveys the flowing relationships between its six voices. The group presents the work with elegant subtlety, allowing the full detail of tonal colouration to shine through unencumbered. The abnegation of worldly miseries in lines such as 'My soul is weary of my life' is echoed in the less well-known but equally absorbing 'Versa est in luctum' ('My harp is turned to mourning') by Alonso Lobo, a complex piece of gorgeous chromatism, in which the sublime soprano tones cascade emotively over the lower counterpoints to remarkable effect' (The Independent)

Tomás Luis de Victoria’s requiem mass for six voices, written in 1603 and published in 1605, is a masterpiece. For many, it represents what Renaissance polyphony is, what it sounds and feels like, and how expressive it can be. For those who have come to know it through an interest in ‘early music’, some would be bold enough to say it sits comfortably beside works like Bach’s St. Matthew Passion, Mozart’s own Requiem mass, and perhaps even Beethoven’s Ninth Symphony as one of the truly great achievements in the history of music; a masterpiece, if there ever was one. However, it is still very much known as ‘early music’. Despite the efforts and protestations of many performers, it is often appreciated through the lens (or is it actually a filter?) of the ‘academic exercise’. A barrier exists—in different places for different people—between ‘early music’ and ‘not early music’ which affects our relationship with what we hear, how we engage with it emotionally, how we believe we are expected to evaluate its performance, and even the extent to which we allow it to excite and overwhelm us.

So, what is a masterpiece? Perhaps it is precisely that work of art which, through its greatness, forces us to forget history; when it was written, in what circumstances, by whom, and for whom. The greatness of the thing itself exists outside time and is as impressive now as it was at its creation. A great composer needs only to encapsulate his idea in notation and a great performer needs only to understand it and communicate it to a receptive audience. This is music, not modern music or early music, new or old. But surely an understanding of the artists’ life contributes to an understanding of his art. After all, the artist was a person, creating art to be experienced by other people, at a specific time and in a specific place. A true understanding of the work therefore requires the acceptance of this idea and of these limits. Isn’t all this talk of universality, transcendence, and timelessness in art just a bit of dreaming? Time definitively separates us from the past. The best we can do is understand history’s facts and attempt to approach a recreation of another time. The closer we come to ‘actually being there’, the closer we get to being the artist himself and thereby to understanding the creation of his art—in other words, relating to and interacting with the art in the most intense way possible.

This is the problem. We are all familiar with the staggering success many have achieved by attempting to be ‘historically informed’ about the music they perform. While in academic circles these theoretical arguments have raged for a few decades now, in concert and on disc the historical ‘added value’ brought by the continued integration of academic research into performances has enjoyed great popularity. Indeed, it is precisely this enthusiasm which has brought works such as Victoria’s six-voice requiem mass to such widespread familiarity. But what makes some works stand out? Why is it that, regardless of our fascination with the historical information we consume with such delight, we are sometimes forced to encounter the difficult question of music’s timeless appeal? It doesn’t matter how far we dig into history; great music refuses to be limited, to be understood, to elicit any response except astonishment, humility, awe, and all of the other more important feelings for which there are no words.

Perhaps as a demonstration of this, below is an outline of the historical facts surrounding the creation of Victoria’s six-voice requiem mass. Tomás Luis de Victoria was born in Avila, 55 miles north west of Madrid, in 1548. He attended the choir school at the cathedral there under the tutelage of Bernardino de Ribera and Juan Navarro, both well-known composers in 16th-century Spain. He was educated at a Jesuit school in Avila before his voice broke and in 1565 he was sent to Rome to be first a singer and later director of music at the Collegio Germanico, a Jesuit foundation training priests for German missionary work. He was ordained a priest in 1575 and remained in Rome working mainly as a cleric, securing an income from his assocation with two large religious houses in Rome as well as benefices in Spain, but also publishing books of masses and motets. In 1585 he was made chaplain to the Dowager Empress María, sister of King Philip II of Spain. María lived at the Monasterio de las Descalzas de S. Clara (Royal Convent of Barefoot Nuns of St. Clare) in Madrid with 32 other cloistered nuns in extraordinary luxury; the nuns were widowed or unmarried noblewomen, each bringing an endowment. Victoria became director of music at the convent, supervising 12 adult singing priests and 4 boys. He also had a personal servant, private meals served to him, and a month’s holiday every year (from 1592 until 1595 he managed to expand his month’s holiday to three years!) and he was even joined at the convent by one of his brothers, Agustín, who was also a chaplain. In 1603, the Empress died and in 1605 Victoria published the music he wrote for her burial observance (which would have lasted all day if not for many days) in a publication entitled Officium defunctorum: in obitu et obsequiis sacrae imperatricis (The Office of the Dead: for the death and obsequies of the holy empress). María left money in her will which allowed Victoria to remain at the convent until his death in 1611.

Does this information help us to appreciate the music Victoria wrote more than 400 years ago? Does it aid in its appreciation to visualise 30 or so wealthy, cloistered, barefoot, aristocratic women sitting in a magnificent chapel in central Madrid, listening to this music performed by 12 men and 4 boys, mourning the loss of their matriarch, perhaps their friend? Or does it help to realise that it was published and disseminated throughout Europe, performed in the early 17th-century at perhaps hundreds of other ceremonies of varied descriptions by choirs of all sizes and abilities? Does it help to remember that Victoria likely considered his job as María’s chaplain as a ‘retirement’ position? With this his last publication, was Victoria summing up his life’s work, or attempting to continue his successful but still nascent relationship with his Spanish printer? Does it make a difference that Victoria relinquished the post of director of music for that of organist in 1604, one year after María’s death, and spent the last seven years of his life with less responsibility?

Alonso Lobo’s story raises similar sorts of questions, though the differences between the lives of Victoria and Lobo must have been apparent to both men. Lobo was born in 1555 in Osuna, a small town 50 miles east of Seville. Lobo was educated in Seville and Osuna, becoming a priest in Osuna before beginning his employment at Seville cathedral in 1591. He journeyed north for eight years to take a job at the cathedral in Toledo, but returned to Seville to spend the rest of his life as director of music there. Lobo’s life seems to us less cosmopolitan than Victoria’s. Lobo didn’t enjoy royal patronage and certainly didn’t live surrounded by luxury in a royal convent in Madrid, serving the king’s sister. As far as we know, he never spent time outside of Spain. While Victoria and Lobo at least corresponded, it is likely that Lobo was viewed by his contemporaries, perhaps as we do today, as outside of the top tier of musicians, stuck in the south of Spain, off the map. The music Tenebrae have here recorded was most likely written while he was in Toledo (as was most of his surviving music), perhaps before Victoria wrote his six-voice requiem, and while its emotive power is obvious, so is the difference in style from that of Victoria’s requiem music; more chromatic, more adventurous, more extroverted. Can we be certain that the influence of the great Palestrina, whom Victoria knew in Italy, was so great that Lobo, only seven years Victoria’s junior, already represented a coming wave of musical experimentation that Victoria missed or eschewed? Did Lobo’s marginalisation cause him to adopt a more adventurous style in order to attract attention? Did Lobo even feel marginalised at all or was he happy to spend his life in the south of Spain away from the limelight?

Any attempt to contextualise great works of art results in questions like these. However, as modern musicians and music lovers, we must not forget that we are necessarily confronted with the practical consequences of these fragmentary histories. If we were somehow able to kneel with the nuns in Madrid in 1603, understand what it felt to have their relationships, live their lives, experience their understanding of the world, would we think the music was more beautiful or powerful? As we have no information regarding the specific use of either of the Lobo pieces recorded here, are we necessarily at a loss as to their meaning or how best to interpret them? Does the fact we know more about the creation of Victoria’s music than Lobo’s mean it affects us more, is more powerful, is ‘better’ art? Crucially, does our own awe and wonder at this music lack such validity that we must seek to vicariously experience the emotions and understandings of our artistic ancestors?

Tenebrae’s performance of this music seeks to express the beauty and power hidden below the surface of historical circumstance, that which marks out true masterpieces as works of art wholly mysterious in their wonder and timeless in their meaning. Their energy, dedication, and precision are here matched by music of extraordinary quality. The result is a vivid manifestation of what Victoria and Lobo—and all musicians and artists—must surely want; an expression of inexplicable beauty.