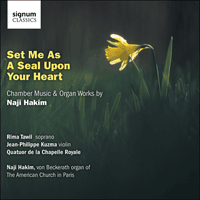 Set me as a seal upon your heart & other chamber music

Naji Hakim has established himself as a performer and composer whose works are indelibly tied to his Christian faith. Recognized with a papal medal for his activities, these pieces are drawn from the span of his compositional career, combining organ music with string quartet and solo soprano. This is Signum’s third album with Naji Hakim, following solo organ discs from Glenalmond college and the van den Heuvel organ of the Danish Radio Theatre.

Påskeblomst (Daffodil) is a well-known Danish hymn for Easter, written by N F S Grundtvig in 1817. The hymn describes the truth of Christianity and its innermost mystery: Resurrection. The theme of the hymn is whether Resurrection is genuine, and this question is presented as a drama between faith and the doubt that lies in everyone’s heart. Grundtvig compares the turning point from doubt to faith to an intoxication that results from drinking a strong drop from the yellow calyx of the daffodil, when he could hear the cockcrow and the morning song and see the dead rise in an Easter dawn (verse 5).

At the end of the hymn it is maintained:

Good Friday is not the last word about Jesus—nor about us! We hold Good Friday as a guarantee of Easter Sunday morning, and the proclamation of God’s ever active and infinite love for us.

Carl Nielsen composed the melody for “Påskeblomst” in 1910. The melody opens with a characteristic twist right under the keynote that evokes a Gregorian chant from the 11th century, the Easter sequence Victimae paschali laudes. Påskeblomst is a hymn that is firmly rooted in the Danish tradition by Carl Nielsen’s brilliant melody, and has today become one of the most popular hymns sung at Easter celebrations.

Påskeblomst for string quartet by Naji Hakim is developed as variations on Carl Nielsen’s melody. The variations are grouped as follows:

Variations V and IX, more vertical and meditative, give a relief to the form and contrast with the groups (II, III, IV), (VI, VII, VIII), and the very lively conclusion.

The Canticle of the Blessed Virgin (Magnificat) is here given dramatic expression in a through-composed form following the vigorous accents and articulations of Luke 1, 46-56. The declamation of the syllabic vocal lines is accompanied by an orchestral organ texture. The initial version for three treble voices and organ was commissioned by Downe House School, England.

The Variations on Wie schön leuchtet der Morgenstern were commissioned by Freunde der Musik am Münster, Liebfrauenmünster, Ingolstadt, Germany for oboe and organ. The premiere was given on 14 September 2008 by Georgi Kobulaschwili, oboe and Naji Hakim, organ. The solo part could also be played by violin, flute, clarinet or saxophone soprano.

How beautifully shines the morning star
full of grace and truth from the Lord,
the sweet root of Jesse!

Because of you,
gracious rose of heaven,
my heart is sick and smouldering,
wounded with love.

Pluck the strings on the harp
and let the sweet music
resound full of joy,
so that with dear Jesus,
my most beautiful bridegroom,
in constant love I may make my pilgrimage!

Set me as a seal upon your heart (Leg mig som en seglring ved dit hjerte) is a setting for soprano solo and organ of one of the most famous passages of King Solomon’s ‘Song of Songs’. Naji Hakim has also written another version of the same work for choir a cappella, commissioned by Malmö Academy of Music, Lund University.

Capriccio for violin and organ develops a lively and dancing theme in an abridged sonata form. The exposition opens out through developing thematic derivations of this joyful theme on the violin. A contrasting and sensual second theme, with soft percussive accompaniment on the organ, leads to a varied recapitulation of both ideas before the brilliant coda.

Amazing grace is a set of variations for soprano solo and organ on the traditional British song New Britain, and the Christian hymn Amazing grace—written by English poet and clergyman John Newton (1725–1807). Naji Hakim has also written another version of the same work for solo organ.

“This piece shows my hope to have our churches not only in peace but also in full communion.” (Naji Hakim)

Die Taube (The Dove) was commissioned by ‘Kirchenmusik bei St. Anna Augsburg’ to celebrate the 450th anniversary of the ‘Augsburger Religionsfrieden’ (Religious peace of Augsburg). It is based on three biblical verses related to peace: Genesis 8, 11, Luke 1, 79 and John 14, 27. The music is through-composed and develops the character of the verses with contrasted string textures, putting in relief the expressive vocal line, a declamation of light and happiness. The work exists in three versions for both tenor or soprano with string quartet, string orchestra or organ. The first performance was given by Robert Sellier, tenor, at the Capella St. Anna streichquartett, St. Anna Augsburg, Festkonzert zum Hohen Friedensfest, 8 August 2005.

Words and music bind people together to form fellowships which guide us into the way of peace. Singing or playing together combines bodies and souls, so that our rhythm and breathing becomes one—a sense of belonging to one another is created which instils the very nature of peace. So it is that by becoming an integral part of the music, our feet are guided ‘into the way of peace’.

In Luke chapter 1, both Maria and Zechariah are carried away, body and soul, in hymns of thanksgiving. They let God’s melody resound in their bodies. Ignatius, one of the Early Fathers of the Church, might have drawn his inspiration from them when he wrote to the Christians of Ephesus around the year 100: “Let God’s melody resound in you.” The melody of our life is a single voice within God’s great melody; an everlasting celestial melody, in which we join together as integral parts—with time, we are gradually shown which chords we are given to touch and which chords to form with one another.

God’s inextinguishable melody has an infinite galaxy of variations. As you would know, a variation is rooted but limitless. At our christening, God gives us a variation—an inextinguishable variation because of his promise, “I am with you always, even to the end of the age” (Matthew 28, 20).

Deeply rooted as we are, God leads us through. He calls us to Life out of His Eternity, He lets his melody reverberate in us and finally calls us back, when we die, to His everlasting future. Let God’s melody resound in you and guide your feet into the way of peace.