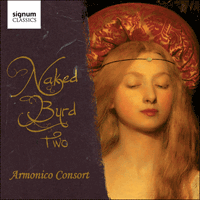 This recording is compiled from Armonico Consort’s ‘Naked Byrd’ programme, featuring music by Tavener, Purcell, Barber and Byrd, composers who wore their hearts on their sleeves, and whose art saw their emotions laid bare, in an atmospheric concert where magical musical moments are intertwined with sublime passages of plainchant and violin improvisation. ‘Naked Byrd Two’ follows on from their December 2009 release (‘Naked Byrd’).

'Barber's Adagio reworking and Tavener's Funeral Ikos are expertly paced with climaxes beautifully judged, Another pair of modern gems are David Buckley's setting from Isaiah, Strengthen ye, and Jonathan Roberts's miniature Never seek to tell thy love. Another Blake classic, Tavener's The Lamb, is sung with great affection and brings this disc of unending delight to a fine close' (Gramophone)
'This splendid second volume in the Armonico Consort's Naked Byrd series continues the punning tradition of a cappella versions of choral pieces by composers who, in the words of the Consort's artistic director Christopher Monks, 'wore their hearts on their sleeves'' (The Independent)» More

Following on from their first volume of works that were, in Christopher Monks’s words ‘united by the tendency of their composers to wear their hearts on their sleeves’, the Armonico Consort here present a second compilation of music stimulated by overpowering feelings and potent sentiments that have the power to move and inspire the listener. In covering a vast expanse of time, the power of music as a tool for intense expression is shown to have reached far into history with some of the music on this recording composed as early as the eleventh century.

And it is in the eleventh century that the programme begins, with the haunting Marian antiphon Salve regina. The exact provenance of this hymn to the Blessed Virgin Mary, one of the most enduring plainsong settings, is not known for certain, although contemporary opinion most frequently attributes it to Hermann Contractus (1013-1054), a renowned scholar, mathematician, writer and Benedictine monk, known to have written a number of hymns later in his life. Of those hymns that are attributed to him other than Salve regina, perhaps the best known is Alma Redemptoris mater. The hymn itself has been used in numerous ways over the centuries by the church but is most commonly found at the end of Compline, the last service of the day and of the sequence of hours, as well as at the various feasts of Mary.

A contemporary take on a now infamous theme by the Tudor recusant composer Thomas Tallis (c1505-1585) follows. The original theme, a hymn by Tallis, the text of which employs the first two verses of Psalm Two, was first seen included in Archbishop Parker’s Psalter of 1567. The theme was brought to particular prominence by Ralph Vaughan Williams who not only included it in the twentieth-century English Hymnal, of which he was one of the editors, but used it as the basis for his own Fantasia on a Theme by Thomas Tallis, composed in 1910 and first performed in Gloucester Cathedral the same year. In The Spirit of Tallis, Christopher Monks uses the original text found in the 1567 Psalter, ‘Why fum’th in fight the Gentiles spite, in fury raging stout?’, while the poignant Phrygian melody of Tallis’s hymn is complemented with an improvisatory and expressive violin line.

It took some thirty years for Samuel Barber (1910-1981) eventually to score his Adagio for Strings for eight-part choir following its composition. Originally written as a movement of his String Quartet, Op 11 in 1936, Barber next scored the work for full string orchestra a little while later. This second version of the work went on to become perhaps one of the best known pieces of American classical music. The text that Barber chose to set, and which is conveniently appropriate for the music, is that of the Agnus Dei, part of the ordinary of the Mass, which seeks forgiveness from sin through the ‘Lamb of God’.

In the first of two works in this programme by John Tavener (1944-2013), Funeral Ikos, the influence of the Orthodox Church on his music, and a seemingly profound religious belief, become particularly evident in setting this text primarily used for the funerals of priests. Written in 1981, the simplicity of the music is conspicuous and potent with much of the work in unison and with much repetition of the material through different combinations of voice parts. Each ‘Alleluia’ section provides a ray of optimism looking in anticipation as to what the next world may bring.

As a composer working in the Restoration, it is difficult to overestimate the contribution that Henry Purcell (1659-1695) made to the revivification of music, both inside and outside of the church, following the period of the Commonwealth and Protectorate. Much of the music that he wrote was linked into the reigning monarch and royal family, and it is thought that Hear my prayer, O Lord is the first part of a longer work that was intended for the state funeral of King Charles II. Following rumours of the king’s death-bed conversion to Catholicism the state funeral never took place and the piece was never to be completed by Purcell. What remains, however, is an astonishingly powerful setting of the first verse of Psalm 102 in which a considerable climax grows from the germ of just a single voice.

Of the multifarious activities of Hildegard of Bingen (1098-1179)—which included life as a Benedictine abbess, founding two monasteries, as well as being a poet and a writer on a wide range of subjects—composition of music to be sung during the liturgy was a vital feature for which she is mostly remembered. Her music, of which there are two works on this recording (Spiritus Sanctus vivificans and O virtus sapientiae), largely stretched the boundaries of the chant of the time, often going beyond the common range that had become usual. It is of a lyrical nature, more often than not being particularly appropriate for the nature of each text. She combined all of her music into a collection entitled Symphonia armoniae celestium revelationum, the exact date of which is not known. Spiritus Sanctus vivificans is a dedicatory hymn to the Holy Spirit, while O virtus sapientiae is a hymn to the Holy Wisdom and the Trinity of Father, Son and Holy Spirit. Both of these works are performed here with a typical organum drone.

Following on from Hope finds a way, included in the first volume of Naked Byrd, Jonathan Roberts’s (b1983) Never seek to tell thy love, brings the programme into the present day. For some years now Roberts has taken part in the educational arm of the Armonico Consort, assisting in their regular workshops. His own music has been nurtured through the Consort, and Never seek to tell thy love is the second of his compositions that they have recorded. Scored for full choir, the text is by William Blake and was first published in 1863.

Antonio Lotti (1667-1740) wrote a small number of settings of the Crucifixus text, of which the version found here (Crucufixus a 8) is probably the most frequently performed. Resident in Venice for most of his career, Lotti was a successful composer of operas as well as writing a great deal of sacred music—his last position being that of the celebrated maestro di capella at the Basilica of St Mark’s. He is mostly known for this short Crucifixus scored for eight voices, which originally formed part of a setting of the Credo, the Nicene Creed used in Christian liturgy, which Lotti composed between 1717 and 1719.

Tomás Luis de Victoria (c1548-1611) is largely regarded as the pre-eminent Spanish composer of the Renaissance period. While his output was written entirely for the church, Victoria was not the most prolific composer of his generation, with many of his contemporaries writing a great deal more music. Born and raised in Avila, Victoria studied in Rome (and possibly with Palestrina, although there is no conclusive proof of this), returning to Spain after a period of work and his ordination to the priesthood. Victoria’s music shows him to be a master of polyphony, and in particular influenced by the Italian style exemplified by Palestrina. Versa est is a six-part motet taken from Victoria’s setting of the Requiem Mass (originally entitled Officium Defunctorum), originally published by Victoria in 1605. The text of Versa est, from the book of Job, refers to the organ and harp echoing voices of weeping, with a plea for mercy as death approaches.

The British-born composer David Buckley (b1976) is perhaps best known as a composer of film scores, writing for major film productions and releases. Trained at the University of Cambridge, Buckley has also written successfully for television, his output being influenced by a remarkably diverse range of musical styles. In Strengthen ye the weak hands, a setting of a text from Isaiah Chapter 35, he demonstrates his compositional versatility in a piece that is full of hope in the coming of the Saviour.

Similarly to Tallis, William Byrd (c1540-1623) was a recusant composer, forced to keep his Roman Catholic faith a secret. In post-Reformation England when the Latin Catholic liturgy was banned, services that followed the Roman Rite took place in secret, and a number of composers wrote music that would have been performed during such events. Byrd’s three Latin settings of the Mass for three, four and five voices fall clearly into this category, and Byrd was quite brave in allowing his name to be credited on their first publication around 1592 (the publisher wasn’t quite as brave, preferring to remain anonymous). As a composer who was in particular favour with Queen Elizabeth I, Byrd’s Catholic activities were frequently overlooked. The Agnus Dei presented here is from the Mass for four voices, which is thought to have been the first of these three settings of the Mass that Byrd penned.

Closing the recording is perhaps one of the most significant and well-known shorter pieces of choral music composed in Britain in the latter half of the twentieth century. Composed in 1982, The Lamb, with a text by William Blake, was written for the third birthday of John Tavener’s nephew, Simon, and has become one of his most renowned works. The simplicity of the music mirrors that of the text and Tavener himself has written that ‘It was composed from seven notes in an afternoon. Blake’s child-like vision perhaps explains The Lamb’s great popularity in a world that is starved of this precious and sacred dimension in almost every aspect of life.’