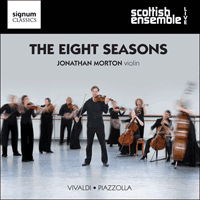 A unique album from one of Scotland's most dynamic and versatile groups—the Scottish Ensemble is a tight-knit band of outstanding string players from around Europe who perform regularly together under Artistic Director, Jonathan Morton. This album—one of their first solo releases following acclaimed albums with artists such as Alison Balsom and Toby Spence—contrasts Vivaldi's timeless Four Seasons with Piazzolla's tango-inspired The Four Seasons of Buenos Aires. Combining Vivaldi and Piazzola together like this underlines the meteorological and cultural differences between Mediterranean Europe and the heart of South America. To have them performed side by side creates a fascinating programme of similarities and contrasts.

'This new recording was made at a concert at the Queen's Hall in Edinburgh, although strangely a sense of the occasion is hard to detect. The playing standard is excellent, with the strings of the Scottish Ensemble finding a light and suitably transparent texture in the Vivaldi, matched by bright, stylish solos from Jonathan Morton' (Gramophone)
'The multiple performances have allowed the players to hone their ensemble skills, and they play with remarkable precision. That is not unusual in Vivaldi recordings, but by applying those baroque standards to the Piazzolla, the sharpness gives those dance rhythms a real kick' (Classical CD Review, USA)» More

Vivaldi Le Quattro Stagioni
Born in Venice in 1678, Vivaldi had come to the violin through his father (violinist at the St Mark’s Cathedral), a normal enough route in those days when musical nepotism assisted performing dynasties to flourish over many generations in the city. Atypically, Vivaldi pursued Holy Orders alongside his musical studies, and was fully ordained in his mid-twenties (1703). For the rest of his days he struggled to maintain a balance of sacred and secular (profane, even) that seems never to have been especially easy. One boon of his holy status was a distinctive nickname that has survived to this day: ‘il prete rosso’—‘the red priest’.

In 1725 the publication Il Cimento dell’ Armeniae dell’invenzione (The trial of harmony and invention), opus 8, appeared in Amsterdam. This consisted of twelve concertos, seven of which were descriptive: The Four Seasons, Storm at Sea, Pleasure and The Hunt. Each of the ‘seasons’ is prefaced with a descriptive sonnet, possibly by Vivaldi himself, though we do not know for sure. They are not great poetry which prompts speculation that perhaps Vivaldi’s rich patron, the Count von Morzin may be the author. Vivaldi dedicated the concertos—and the whole collection in which he published them—to the Count with these obsequious lines:

'Pray be not surprised if, among these scant and feeble concertos, Your Most Illustrious Lordship finds The Four Seasons which have so long enjoyed the indulgence of Your Most Illustrious Lordship’s kind generosity, but believe that I have deemed it fitting to print them because, while they may be the same, I have added to them, besides the sonnets, a very clear statement of all the things that unfold in them, so that I am sure that they will appear new to you.'

To incarnate a patron’s poor poetry in great music would be a deft move indeed; but we will never know if that is the one that Vivaldi made.

That dedication reveals that these concertos stood out from the crowd right from the very beginning. Publication made them available far and wide and they were soon heard in Britain, France, Germany and beyond. With Vivaldi’s death they suffered the fate of so much music—they simply fell into obscurity. It is hard for us nowadays to remember how much the audiences of past centuries only really wanted to hear contemporary music. With very few exceptions, a composer, once dead was generally forgotten. Vivaldi was re-discovered, like so many others, in the twentieth century, when audiences decided they preferred the music of the past to challenging scores of the present. At the start of the twenty-first century it is debatable whether there is any other piece of any kind more popular than The Four Seasons. Its undeniable appeal lies in its immediacy. Vivaldi was not just a great tunesmith; he conjures up his poetic landscapes and populates them with birds, dogs, hunters, nymphs and shepherds in brilliant colours that have not faded nearly 300 years later.

Piazzolla grew up musically with a foot in each of two camps. He developed a formidable reputation as a promising young player of the popular bandoneon (an accordion-like Argentinian instrument used mostly in dance bands), but also studied under the leading Argentinian composer Alberto Ginastera. By 1945 he had made his name as a bandleader and even recorded 25 albums. His next step was to deepen his classical studies, and in 1954 he received a grant to travel to Paris to work with the legendary composer and teacher Nadia Boulanger in Paris. The impact of this woman on twentieth century music—especially that of the Americas—has yet to be fully understood. The roll call of her students is astounding, including such giants as Aaron Copland. Three qualities made her such a great teacher: she could assimilate a score at sight; she had an astonishing penetrating and open ear and mind; and she was unsparingly honest. She could spot a square peg trying to fit into a round hole in seconds, and she did Piazzolla a huge favour. He had brought with him his ‘classical’ scores to play to her—and she found them too full of everybody else’s influences—Stravinsky and Bartók particularly. 'The truth is', Piazzolla later wrote, 'I was ashamed to tell her that I was a tango musician, that I had worked in the whorehouses and cabarets of Buenos Aires. Tango musician was a dirty word in Argentina when I was young. It was the underworld. But Nadia made me play a tango for her on the piano, and then she said, ‘You idiot! Don’t you know, this is the real Piazzolla, not the other one? You can throw all that other music away’. So I threw away ten years work, and started with my nuevo tango.'

The first of the The Four Seasons of Buenos Aires was written in 1965. The title inescapably brings Vivaldi’s Four Seasons to mind, but that is where the tribute ends in Piazzolla’s original versions. His are single-movement works, while Vivaldi’s all have three. Vivaldi sticks closely to his poems and revels in evoking specific images from them—dogs barking, storms, drunken peasants, birds singing; not so Piazzolla: he is more for the spirit or feeling. Above all, the solo violin is critical to Vivaldi; Piazzolla did not call for one. Then, in the 1990s, along came composer and arranger Desyatnikov. Seasons generally seem to be something of an obsession with Desyatnikov. Besides his work on Piazzolla’s piece, he has also composed a set of pieces called The Russian Seasons for violin, soprano and strings. What he did here was to take Piazzolla’s originals and ‘vivaldify’ them, replicating Vivaldi’s orchestration—including the solo violin—and weaving in all kinds of clever allusions to Vivaldi.

He also adds jokes. Remember, when it is summer in Vivaldi’s Venice, it is winter in Piazzolla’s Buenos Aires. So listen closely and you will hear bits of Vivaldi’s Summer worked into Winter here. And at the end of Spring … well, you cannot miss the allusion.

Combining Vivaldi and Piazzola together like this underlines the meteorological and cultural differences between Mediterranean Europe and the heart of South America. In Piazzolla’s Seasons, the “weather”, or rather, the ambience, is always the same—thick air, highly charged with sensuality. Within this frame, though, there are countless variances of emotion, from utmost tenderness, to nearly violent passion. There are no winter chills or violent summer storms, no singing birds or barking dogs but the Four Seasons of Buenos Aires nevertheless convey the sultry atmosphere evocative of their homeland.