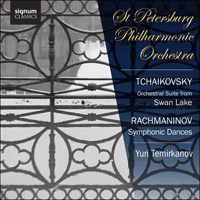 Given the hallowed position Swan Lake has occupied in the ballet repertoire for more than a century, the fact that it was a spectacular failure on its first outing might come as something of a surprise. Reviews of the initial performances of two versions performed in Moscow and St Petersburg, respectively in 1877 and 1895, tell their own story: ‘the music of Swan Lake is pallid and monotonous in the extreme’ and ‘The principal defect … is its music, and it is simply unbelievable that it was written by such a great master as the deceased P. I. Tchaikovsky.’

The composer had died two years prior to the 1895 St Petersburg revision of the ballet, and although it seems unthinkable today that the music for Swan Lake came in for such criticism, it is more a question of the dancers and choreographers of the day being wrong-footed by Tchaikovsky’s genius than his naivety as a composer for ballet. Naturally, with no Tchaikovsky around to upset matters, the choreographers, Marius Petipa and Lev Ivanov, were more concerned with their own art than with any musical consideration. They desired a beautiful production for dancers and balletomanes rather than for the more musically inclined spectator—a production to dazzle the eye rather than please the ear. The press praised the presiding choreographer thus:

Petipa distinguished himself wonderfully well in the production of Swan Lake. An abundance of taste and talent is revealed in the composition of the dances of this ballet, in the masterful groupings of the corps de ballet and finally in the variety of the whole ensemble.

Marius Petipa is still regarded as the doyen and progenitor of twentieth Century classical ballet principles and, whatever the initial intentions, his production helped keep Tchaikovsky’s music in front of the public, opened it to further scrutiny and revision and ultimately paved the way for endlessly inventive productions. While Petipa and his choreographical cohorts were not overly concerned with the music per se, they were, in fact, merely working with the music they had inherited from previous productions and interpolating numbers to balance the dances and enhance the general theatricality of the piece. It was, however, also noted by the press that Tchaikovsky himself had been far from happy with the music and that, ‘if he were alive, this ballet would probably not have been produced on the stage of the Mariinsky Theatre without preliminary alterations, as the music, excepting a few numbers, is completely unsuited for dancers.’ This is undoubtedly the case, as although the score is exceptionally beautiful, sumptuously orchestrated, immediately appealing and musically more coherent than most previous Russian ballets, it is rhythmically complex and was considered rather too much for dancers of the time. Despite this serious drawback, revealing Tchaikovsky’s lack of familiarity in collaborating effectively with the ballet masters, Swan Lake yet retains credit for redefining the role of music within the classical ballet.

Little information exists on the actual composition of the ballet’s music, except that it appears to have been derived from an entertainment provided for, or initiated by, the children of Tchaikovsky’s sister, around 1871. Music aside, the story of Swan Lake has helped in no little fashion to its continued success in ballet houses the world over. Curiously, there are also few confirmed facts on the libretto’s genesis, only hints as to the individuals, including the composer, involved in its conception and some links to Germanic and Slavic folk tales. The ballet opens with Prince Siegfried, the heir apparent at a royal court, celebrating his coming of age. He is congratulated by peasants, but also instructed by his mother that he must select a wife the following day at a birthday ball specifically designed for the pursuit of marriage. As the revelries continue, Siegfried, who would rather marry for love, runs off with his associate, Benno to hunt a flock of passing swans. The Prince and Benno are in a forest at the beginning of Act II and, just as they decide to spend the night, catch sight of the swans disappearing behind a nearby ruin. The two men investigate and with Siegfried taking aim to fell his prey, a supernatural light embraces the ruin. A beautiful vision swathed in white feathers appears. She is Odette, turned into a swan by day and a woman at night by the sorcerer, and villain of the piece, von Rothbart. Odette is attended by a group of swans-inwaiting—ladies similarly afflicted by von Rothbart’s necromancy—who reside at the lake comprised of the tears of the kidnapped Odette’s parents. The action continues with the sorcerer bringing his own daughter, Odile, to Siegfried’s ball, as the image of Odette, but clad in black. Pledges, troths, evil-doings and forgiveness eventuallybring matters to a head, when Siegfried and Odette realise they must leap to their deaths in the Swan Lake to destroy von Rothbart and preserve their everlasting love.

Not one of the many and varying suites derived from Swan Lake was ever compiled by Tchaikovsky, but the cogency of the score makes a myriad of orchestral scenarios possible. The present, generous suite is symphonic in length and brings not only the dark story to the fore, but also the finest music in the Swan Lake score.

Unlike Tchaikovsky, whose jangling nerves at one point led him to think that his head might fall entirely to one side if he didn’t hold it whilst conducting, Sergei Rachmaninov conducted himself equally as well on stage as he did at his composing desk. The rarest of musical creatures,Rachmaninov was able to sustain the ultimate tripartite musical career: he was a celebrated composer in his own lifetime, a fine conductor of his own music and that of other composers and without doubt the main contender for the prize of the greatest pianist of the Twentieth Century.

Despite such multifarious brilliance, Rachmaninov suffered a similar critical mauling to the early Swan Lake outings with his compositional swan-song, the Symphonic Dances, Op 45. After insufficient rehearsal, the work was premiered on 3 January 1941 by Eugene Ormandy and his Philadelphia Orchestra in the Philadelphia Academy of Music—and the public response was far from rousing. This was not only Rachmaninov’s last completed composition, but his first major opus conceived and written entirely within the United States, and the poor reception was a blow to the composer. Closing-in on his seventieth birthday, Rachmaninov had been in a similar position almost half a century previously, in a different epoch—Imperial Russia, after the first performance of his First Symphony. The young composer was all but paralysed when it came to producing anything further of significance for years. But the good offices of his family, and the remarkable, if arcane, methods of neurologist Dr Nikolay Dahl gradually brought the young man out of his torpor enough to compose his spectacularly successful Second Piano Concerto.

But the older, wiser composer was more circumspect, regarding the Symphonic Dances as his final spark, even declaring, ‘I don’t know how it happened.’ This seems a little disingenuous, as the work has all of the hallmarks of a valedictory affair, a summation of his work as a composer and above all as a symphonist, replete with quotes from a number of his earlier compositions. The trauma caused by the rejection of his First Symphony had clearly been internally absorbed by Rachmaninov, as he externalises it in the dances by quoting its opening motif in the first of them. A more superstitious individual might have discarded such a notion as asking for trouble. But Rachmaninov seems to have no qualms with tempting fate, as he quotes both the ‘Dies irae’ (the Day of Wrath), a plainsong from the medieval Mass for the Dead, and another chant from his Russian Orthodox Vespers, Blagosloven Yesi, Gospodi (Blessed art Thou, O Lord) in the final movement of the dances. These themes of death and resurrection suffuse the final movement of the Symphonic Dances in a demonic struggle, with the resurrection motif winning out at the point in the manuscript where Rachmaninov wrote his final word in his final full score—‘Hallelujah’.