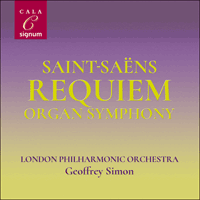 One of a pair of distinctive Saint-Saëns recordings made with the London Philharmonic Orchestra, this album features the rarely recorded Overture to La princesse jaune and the expansive Requiem.

Music came to Saint-Saëns with a ready facility: 'I write music as an apple tree produces apples', he remarked, 'and live in music like a fish in water.' He wrote around 170 opus-numbered compositions, and a vast amount of other music besides. During his long life he was hailed as one of the greatest of French composers and after the first Paris performance of his 'Organ' Symphony, Gounod exclaimed, 'There goes the French Beethoven!'

The German classics of Beethoven, Mendelssohn and Schumann were, in fact the formative influences on Saint-Saëns’s early development, though later he absorbed not only old French dance forms, but also a considerable leavening of 'exotica', brought about by his constant travelling abroad.

The popularity and fame he enjoyed during his lifetime brought about a reaction against his music, encouraged by his own antipathy to modern trends: he despised Debussy and was rendered speechless with horror at the first performance of Stravinsky’s Rite of Spring.

Nevertheless, amongst his vast array of compositions is a treasury of delightful pieces, including some which have inevitably been overshadowed by his best-known works. In this release two such compositions—the Overture to La princesse jaune and the Requiem—are juxtaposed with one of Saint-Saëns’s most powerful works, the 'Organ' Symphony.

Overture to La princesse jaune Op 30
In 1872, Saint-Saëns collaborated with the librettist Louis Gallet on a one-act operetta which was to be produced at the Opéra-comique in June of that year. The subject was a whimsical piece of oriental fantasy, in which a young Dutchman comes sufficiently under the influence of narcotics to imagine himself transported to Japan—the land of 'silver dragons, jade goblets and scented wines'. Here he falls for a Japanese figurine, 'The Yellow Princess' of the title, but when he emerges from his drugged state he actually finds himself in the arms of the girl he really loves. The operetta received high praise from Fauré, who wrote of its wit, tenderness and splendid colour—qualities to be found in the delightfully exotic overture, with its overtones of Sullivan and Offenbach.

Requiem Op 54
The Messe de Requiem occupies a special place in Saint-Saëns’s religious choral works. Its dedicatee was a friend named Albert Libon, who had made a bequest to the composer of 100,000 francs on condition that Saint-Saëns should write a requiem to be performed after Libon’s death. This occurred in 1877 and early the following spring, Saint-Saëns travelled to Switzerland where he composed the work in its entirety within the space of eight days.

Unlike Berlioz and Verdi, whose respective requiems were conceived in grandiose and quasi-operatic styles, Saint-Saëns’s composition never loses sight of the church. As in the Requiem of Fauré, a lifelong friend of the older composer, the vocal writing throughout is both devotional and entreating, with soloists and chorus echoing each other in urgent supplication. The scoring is discreet and lucid, the harps in particular making notable contributions to the accompaniment with filigrees of sound. The organ too has an important part, and is often used with striking effect, as in the 'Tuba mirum' section of the Dies irae, where it is joined by four unison trombones. (At the first performance in 1878, under the composer’s direction in the Church of Saint-Sulpice, the organ was played by Charles-Marie Widor.) The sorrow in the music, particularly in the opening pages of the Requiem and again in the Agnus Dei (where the same theme is reprised), takes on an added poignancy when we learn that not long after Saint-Saëns returned from Switzerland, his young son fell to his death from the fourth floor of the family’s Paris home. This tragedy was compounded even more horribly when his other child died of an illness only a few weeks later. One can almost hear in Saint-Saëns’s deeply-felt music a premonition of the pain that was to come.

Symphony No 3 in C minor ‘Organ’ Op 78
Although known as his Symphony No 3, this was in fact the fifth symphony which Saint-Saëns wrote. There were four very early efforts written in the 1850s, of which two were neither numbered nor published. There was then a gap of a quarter of a century before this 'third' symphony was written, by which time Saint-Saëns had become famous not only as composer but as a celebrated keyboard virtuoso; he was also much in demand on tour as a conductor of his own works.

Now aged fifty, he was at the height of his reputation, and the London Philharmonic Society was anxious to commission a work from him which he could conduct at one of their concerts. As it happened, Saint-Saëns already had some ideas in mind for a new symphony and had played a few themes for Liszt, a long-time champion of his music, while working on the sketches in Paris. They formed the basis of the grandiloquent work he duly presented to London on 19 May 1886—a four-movement symphony actually laid out in two separate parts, with the opening Adagio linked directly to the succeeding Allegro, and the Scherzo which commences the third movement similarly leading into the Finale without pause. Saint-Saëns dedicated the symphony to Liszt, whose death only a few weeks after its first performance was a tragic blow to the much-saddened Frenchman.

While working on the symphony, Saint-Saëns wrote to the London Philharmonic Society to say that it 'will be terrifying', adding, however, that 'it will be a treat for me to conduct it. Will it be a treat, though, for the people who hear it?' The ovation it received gave him his answer, and its Paris premier

Posterity has long decreed that the 'Organ' Symphony is, indeed, a 'treat' for audiences, since they have long recognised it as one of those works which makes a very special occasion out of a concert. Principally, of course, this is due to the effect of the organ’s entries—initially in the sublime Adagio section, which contains one of the composer’s superb long-breathed melodies, and again with the organ’s thrilling reappearance at the start of the Finale, in which Saint-Saëns obtains all the possible excitement and drama which can be wrung from large orchestral forces. 'I have given all that I had to give', wrote Saint-Saens—'what I have done I shall never do again.' What he did, in fact, was to provide generations of music-lovers with one of the finest Romantic symphonies ever composed, its popularity fully assured as long as music is there to be made.