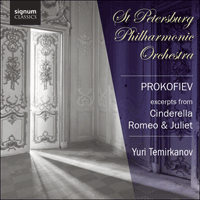 Suites from Cinderella & Romeo and Juliet

Signum's third album with the St Petersburg Philharmonic Orchestra and Yuri Temirkanov presents another great work of the Russian musical tradition. Prokofiev's ballet scores for Cinderella and Romeo & Juliet remain popular and often performed to this day, with their success at the time of composition leading to Prokofiev's creation of the orchestral suites performed on this album.

'No doubt about it, Sergei Prokofiev was Tchaikovsky’s heir as chief purveyor of high-class ballet music. This disc has 16 excerpts from his two most popular, Cinderella and Romeo And Juliet, well played by the St Petersburg Philharmonic. Alas, half an hour from each isn’t enough :… still, an anthology to enjoy' (The Daily Telegraph)
'As usual with Temirkanov, the performances are marked by decisive tempi, clean phrasing, and immaculate orchestral playing … if you are a Temirkanov fan, you'll certainly want this' (Fanfare, USA)» More

January 26 was my mother’s name day. All the relatives conferred as to how to celebrate the occasion. They finally decided to get seats in two boxes at the Bolshoi Theatre, where Tchaikovsky’s Sleeping Beauty was being performed. To the mind of a child, this was a great occasion: some fifteen members of the family, including quite a few children, were gathered together in two adjoining boxes…sweets made their appearance, and you could take as much as you wanted from them. Then baskets of tangerines and other fruits were opened. All of this no doubt made a greater impression on me than the Ballet itself.

But when they—that is, some of the cast in the Sleeping Beauty—were moving along in a boat while the stage set moved towards them, your gaze, after having been glued to the spectacle for a time, involuntarily shifted. And, as you looked around, it seemed that the theatre was also moving, until finally you couldn’t tell whether it was the stage or the theatre, or your own head that was moving.

This childhood reminiscence, penned by the composer himself, reflects Prokofiev’s strangely ambivalent attitude toward the ballet, a genre in which he garnered more than a little success during his lifetime. Whilst studying at the St Petersburg Conservatory he complained of his dislike for ballet-style numbers when shown the score of Tchaikovsky’s Sleeping Beauty and a few years later he would even ignore the glorious receptions accorded to Stravinsky’s Firebird and Petrushka, claiming that ‘for the moment the idea of writing my own [ballets] does not interest me’. For over 40 years, Prokofiev worked long, arduous hours composing and reworking more than a dozen operas with no definite guarantee that they would ever see the light of the stage. His ballets, however, were all written in response to explicit commissions and, for the greater part, extremely well received at their opening nights and thereafter. Such an outlook may well be down to Prokofiev concurring with the thinking of the day in Russia (and, indeed later, in the Soviet Union), that opera was simply a more respectable art form than the ballet. After the Revolution, opera was also viewed by the Soviet authorities as ripe for use in the development of the new state’s political and cultural landscape via its valuable use as propaganda.

But the dance was not to be denied his talents for long. The indefatigable supremo of the ballet world, Sergei Diaghilev would soon bend Prokofiev to his will, as he had already done with Stravinsky, Debussy, Ravel and a good handful of the early Twentieth Century’s greatest talents. He temporarily appears to have convinced the young composer that the days of opera were on the wane and that ballet would now take centre stage. The eventual result of their collaboration, Chout, Le pas d’acier and The Prodigal Son, all received their premieres in Paris with the help of Diaghilev’s firm, guiding hand and his steady stream of exceptional dancers, choreographers, set designers and artists which formed his ground-breaking Ballets russes company. A final Paris premiere, in 1932, three years after Diaghilev’s death was, however, to prove the end of an era: On the Dnieper was a resounding failure, garnering some of the worst reviews Prokofiev had ever received.

After leaving the evolving Soviet Union in 1918, Prokofiev spent most of the 1920 and early 1930s in the USA and France, where much as he tried, he failed to emulate the popularity of Rachmaninov in America or Stravinsky in Western Europe. Although also a Russian composer abroad, Prokofiev had neither fled nor left the Soviet Union without official permission, had by no means ever severed ties with his beloved homeland and, indeed, spent extended periods there on a number of occasions in the early 1930s. By 1936, he had moved his family permanently from Paris to Moscow, where he was allowed two more tours of Europe and the USA before his coveted passport was removed on a technicality, and never returned. Whether his motives were to do with his stated desire to return to his own country, to ‘see the real Winter again’, or to indulge in the privileges attendant on a Soviet composer returning home from the corrupting influence of the West, he was now, and would remain for the rest of his life as an artist of the USSR and a musical servant to the man with whom he would share his very dying day—Joseph Stalin.

Despite the horrors of the Stalinist purges to come and a second great war close on the horizon, Prokofiev was far from inactive and also far from unhappy. After the disappointment of the On the Dnieper, he may have felt that ballet was, for him, a thing of the past. But, as the composer later recalled:

In the latter part of 1934 there was talk of the Kirov Theatre of Leningrad staging a ballet of mine. I was interested in a lyrical subject. Shakespeare’s Romeo and Juliet was suggested. But the Kirov theatre backed out and I signed a contract with the Moscow Bolshoi Theatre instead. In the spring of 1935, Radlov and I worked out a scenario, consulting with the choreographer…The music was written in the course of the summer, but the Bolshoi Theatre declared it impossible to dance and the contract was broken.

Sergei Radlov, Prokofiev’s friend and collaborator in the staging of the composer’s Love for Three Oranges, had been sacked as director of the Kirov during an artistic purge of the theatre at the beginning of Stalin’s terrors in late 1934. The pair had originally decided on changing the end of Shakespeare’s play, working on the option that the dead can’t dance—but soon abandoned the idea. The piano score for Romeo and Juliet was written during the summer of 1935 at Tarussa, where the Bolshoi company had a rural retreat. Although surrounded by Bolshoi dancers and staff during the composing of the work, when the music was presented at the Bolshoi Theatre, the company threw out the contract on the basis that the music was too complicated—unfit for dancers. Without a theatre to stage his first full-length, evening ballet, Prokofiev, never one to waste good music, produced two concert suites from the work in 1936, and arranged 10 numbers for piano solo the following year. Eventually, after some revisions, the full piece was performed, but not in Russia and without the composer present. Instead its premiere was held in Brno Opera House in Czechoslovakia on 30 December 1938. Although Romeo was produced the next year in Leningrad, Prokofiev held the work dear enough to continue improving it for the 1946 Bolshoi premiere, at the same time concocting a third suite for the concert hall. Before long, the initially reluctant Bolshoi embraced the ballet as part of their repertory and the concert suites gradually found their way into the general repertoire of orchestras the world over. Brimming with exciting and memorable music, the ballet produced one of those elusive classical numbers which immediately grabs the attention of all who hear it. The Montagues and the Capulets, also known as The Dance of the Knights, remains one of the most popular of all classical ‘tunes’, in constant use in advertising, in the pop song arena and for introducing stadium rock bands, sports teams and television shows.

His next ballet, Cinderella, has much in common with Romeo and Juliet. It, too, spawned three highly entertaining orchestral suites and was fashioned as a straight-ahead Russian narrative ballet in the tradition of Tchaikovsky’s masterpieces of the genre. It also had the immense fortune to have been danced by the great Galina Ulanova, who adopted, defined and brought great fame to the role of Prokofiev’s Juliet. Soon after completing his opera, Betrothal in a Monastery, which failed to make inroads into the repertory, the composer returned to ballet and settled on the subject of Cinderella. Inspired by the superlative dancing of Ulanova, who had been one of the ballerinas who initially found Romeo and Juliet so difficult, Prokofiev resolved to iron out previous problems by composing in the old, tried-and-tested format of waltz-like sections intermingling with the more measured courtly dance:

…I was anxious to make the ballet as ‘danceable’ as possible, with a variety of dances that would weave themselves into the pattern of the story, and give the dancers ample opportunity to display their art. I wrote Cinderella in the traditions of the old classical ballet. It has pas de deux, adagios, gavottes, several waltzes, a pavane, passepied, bourrée, mazurka and gallop. Each character has his or her variation.

Composition commenced in the countryside near Moscow, Cinderella having been commissioned by the Kirov after their eventual great success with Romeo and Juliet. But, once again terrible historical events would have their say. ‘On June 22 [1940] a warm and sunny morning, I was sitting at my desk. Suddenly the watchman’s wife appeared and asked me…if it was true that the Germans had attacked us’. And true it was, and as Russia prepared to fend off Hitler’s army, Cinderella was naturally set aside and he began composing patriotic songs and military music that could be of use at a time of war. He was excused service due to his ‘genius’ and was soon at work on a massive, patriotic opera, War and Peace, concentrating on Russia’s conflict with Napoleon. He did not return to Cinderella until several years later when, after some convincing by friends and colleagues, he completed the piano score at the end of 1943. The ballet was premiered not by the commissioning Kirov, but by the Bolshoi on 21 November 1945 and to a welter of enthusiastic reviews for both composer and company. Such a flurry of fairies and elves, wizards, dwarves and ugly sisters, not to mention the Prince and his Cinders, set to such extraordinary music, must have been more than a simply fantastical experience to contemporary audiences after a war which had been only too real.