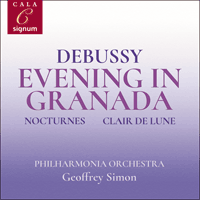 One of a pair of distinctive Debussy recordings, made with the Philharmonia Orchestra and remastered here. Geoffrey Simon’s programme expands several of Debussy’s piano works into lavish orchestrations, including arrangments by Stokowski, Grainger, Gleichmann and Büsser.

Claude Debussy was the father of 'Impressionism' in music. Inspired by such French painters as Monet, Renoir and Degas, and poets of the 'Symbolist' school, including Mallarmé, Verlaine and Baudelaire, he produced compositions which sought to suggest—rather than to display—the fleeting aspects of colour and light on imaginary scenes and subjects. With vibrant timbres and half-lit dream-worlds, his music was at the opposite extreme to the grandiose orgies of sound so beloved by Wagner and Richard Strauss. Such were the evocative qualities of Debussy’s piano compositions—their nuances, moods, and even their exotic titles—that many musicians felt compelled to transcribe them for orchestra in the same way as Debussy himself had orchestrated two of Satie’s piano Gymnopédies. The present selection therefore includes several such arrangements of Debussy’s most atmospheric pieces, framing the composer’s purely orchestral Nocturnes.

La soirée dans Grenade (orchestrated by Leopold Stokowski)
La soirée dans Grenade (Evening in Granada)—the second of the tripartite piano set Estampes (meaning 'Prints' or 'Engravings')—was published in 1903. Like other French composers, such as Chabrier with España, Ravel with Rapsodie espagnole and Boléro and Lalo with his Symphonie espagnole, Debussy had more than a passing feeling for the romance of Spain despite visiting the country only once, to see a bullfight in San Sebastian. His superb evocation of a sensuous, half-lit twilight in Granada is a languid serenade, pulsing with the veiled rhythm of a slow habañera. Conductor Leopold Stokowski introduced his colourful orchestration of La soirée dans Grenade (Debussy’s original title) with the Philadelphia Orchestra on 27 November 1940 in a 'Concert for Youth' which began with the maestro’s own transcription of Bach’s Toccata and Fugue in D minor and concluded with Boléro.

Clair de lune (orchestrated by André Caplet)
In the days of 78rpm records, Clair de lune was recorded in almost as many orchestral versions as in the piano original, something which undoubtedly helped to make it Debussy’s, if not the world’s, most popular ‘miniature’. Indeed, this music almost made it into Walt Disney’s Fantasia, where a pair of swooping white cranes, gently circling round a moonlit blue lagoon, would—had the sequence not been omitted—have provided the cartoon movie’s most romantic visual images. It is André Caplet’s transcription which here provides this much-loved piano piece with delicate orchestral colourings.

Pagodes (orchestrated by Percy Grainger)
In the autumn of 1905, Percy Grainger gave the first British performance of Debussy’s Pagodes in a piano recital at the Bechstein Hall in London. The music’s inspiration lay in the sounds of a Javanese gamelan orchestra which Debussy had heard in Paris at the Universal Exhibition of 1889. The impressions created in his mind were allowed to foment for several years and in due course he put his musical thoughts on paper, with Pagodes becoming the first of the three Estampes of 1903. Grainger’s extraordinary 1928 arrangement—for thirteen percussionists, four grand pianos, celesta, dulcitone and a harmonium—sets out to evoke with western instruments the haunting sounds of the gamelan which had so captivated the composer many years earlier.

La fille aux cheveux de lin (orchestrated by William Gleichmann)
La fille aux cheveux de lin (The girl with the flaxen hair) is another short piece from Debussy’s 'First Book of Twelve Preludes for Piano' (the same volume which contains The engulfed cathedral). This 'portrait of a maiden in diaphanous lines' was originally inspired by a poem of Leconte de Lisle which commenced: 'Who, seated on the flowering lucerne, sings in the fresh morning air? It is the girl with the flaxen hair, the beautiful girl with cherry lips …' In orchestral form, the simplicity of this music takes on a particularly touching quality, and is again in Debussy’s 'pastoral' mood.

Nocturnes
Nocturnes—another of Debussy’s three-movement works—dates from between 1897 and 1889. It epitomises his fascination with the 'feelings and impressions' in the art movements of his time, whether in poetic literature or the great French impressionist painters. Initially, Debussy had the idea of writing three pieces for solo violin and orchestra but it was the series of oil paintings entitled Nocturnes by the American artist, James Whistler, which provided the direct inspiration for this purely orchestral triptych, first heard in complete form in 1901.

The music suggests the passing overhead of mysterious cloud formations in the first piece, a kind of brilliant nocturnal festival in the second, and in the final section the distant voices of the sea nymphs of ancient mythology (represented by a wordless female chorus) luring sailors to their doom with voluptuous songs.

Debussy himself provided his own commentary, writing:

The title Nocturnes is to be interpreted in a general and, more particularly, in a decorative sense. Therefore, it is not meant to designate the usual form of nocturne, but rather all the impressions and the special effects of light that the word suggests.

Nuages renders the immutable aspect of the sky and the solemn motion of the clouds, fading away in grey tones, slightly tinged with white. Fêtes gives us the vibrating, dancing rhythm of the atmosphere with sudden flashes of light. There is also the episode of the procession (a dazzling fantastic vision) which passes through the festive scene and becomes merged with it. But the background remains persistently the same: the festival with its blending of music and luminous dust participating in the rhythm. Sirènes—the sea and its innumerable rhythms; then amid the billows silvered by the moon, the mysterious song of the sirens is heard; it laughs and passes.

Première rapsodie
Although he called it his 'First Rhapsody', Debussy didn’t write a second such composition in this form. This particular example of a work for solo clarinet was devised as a test piece for the Paris Conservatoire in 1910 and was one of a pair, the other being the Petite pièce for clarinet and piano.

Originally, the Rapsodie was also for clarinet and piano, but Debussy himself subsequently orchestrated the accompaniment and remarked that 'it’s one of the easiest pieces on the ear I’ve ever written'.

Petite suite (orchestrated by Henri Büsser)
This four-movement suite for piano duet was written in 1889 and orchestrated by Debussy’s friend Henri Büsser in 1907. Like Debussy, Büsser studied at the Paris Conservatoire, was a winner of the Prix de Rome, and in addition to composing and conducting also orchestrated Debussy’s Printemps. In the first piece, Debussy returns once more to music with water in the background, depicting a small boat gliding along in the moonlight. The light-hearted Cortège was perhaps inspired by a poem of Verlaine, wherein a pet monkey in a brocaded jacket trots in front of his mistress whilst she daintily flutters a delicate handkerchief. The Menuet was Debussy’s 1880s idea of an old classical dance, while the bright-toned finale brings to mind the ballet music of such masters of the genre as Delibes and Saint-Saëns.