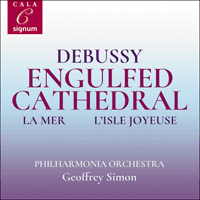 One of a pair of distinctive Debussy recordings, made with the Philharmonia Orchestra and remastered here. Geoffrey Simon’s programme expands several of Debussy’s piano works into lavish orchestrations, including arrangements by Stokowski, Grainger, Ravel and Caplet.

Claude Debussy initially came under the spell of Germanic musical tradition, but soon rejected its sonata-forms, Teutonic philosophies and myth-laden Wagnerian music dramas. Instead, he found inspiration in colour, light and shade, subtle harmonies and rhythms, and his own fantasy and imagination. Although the largest part of his output lies in his compositions for the piano, he was also a master of orchestral sonorities. Under his supervision, he would often let colleagues orchestrate his piano compositions for him. Later, arrangers from further afield followed suit, making orchestral transcriptions which brought Debussy’s music out of the living room and recital hall to a wider concert-going public. Our programme thus contains orchestral versions of some of Debussy’s most evocative piano works, with, at their centre, his own masterful impression of the turbulent, constantly shifting sea.

La cathédrale engloutie (orchestrated by Leopold Stokowski)
'With Debussy all begins and ends with the chord', wrote Oscar Thompson. 'The key to everything he accomplished is in his harmony.' A striking illustration of this is to be found in La cathédrale engloutie from Debussy’s 'First Book of Twelve Preludes for Piano', published in 1910. Hollow, sideways-moving chords eerily evoke the ancient Breton legend: 'On clear mornings,' David Ewen writes, 'when the sea is transparent, the Cathedral of Ys rises into view; clearly audible are its tolling bells and chanting priests. Slowly the vision is dissipated. The cathedral returns to its sleep in the depths of the sea.' Such graphic music cries out for orchestral realisation, and has inspired several musicians to make symphonic transcriptions, including Henri Büsser, Sir Henry Wood and that magician of orchestral sound, Leopold Stokowski. His version, for very large orchestra, fully realises both the atmosphere and the majesty of the music. Its first performance took place in Philadelphia on 5 February 1926.

L’isle joyeuse (orchestrated by Bernardino Molinari)
Debussy wrote this exuberant piano rhapsody in 1904 while on Jersey, one of the Channel Islands off the coast of France. Its principal source of inspiration was a painting by Watteau entitled Embarquement pour Cythère (Embarkation for the Island of Cythera). The sparkling sensuality of the music, especially as orchestrated by Debussy’s friend Bernardino Molinari to the composer’s indications, brings it into the same sound world as La mer, in which it could almost occupy a place as an extra movement.

Deux Arabesques (orchestrated by Hubert Mouton)
These two early piano pieces, published in 1891, are the musical equivalents of designs in Arabian art of interlacing patterns in graceful curves. Charming and rhapsodic, their 'delicate tracery' and 'twining counterpoints', to quote Debussy’s own words, find extra colourings and subtleties in the orchestral forms presented here.

La mer
When Debussy did choose to write directly for the orchestra, it was with consummate artistry. His early tone-poem of 1894, Prelude to the Afternoon of a Faun, enchanted the music world and to this day is revered for its gossamer textures and effortlessly flowing lines. A decade later La mer sprang into being, destined to become one the twentieth century’s musical masterpieces.

The sea had a life-long fascination for Debussy—he had originally been intended for 'the noble career of a sailor'—and his passion for all its aspects was often reflected in his music, most notably The engulfed cathedral, Sirènes from Nocturnes and the sea music in the opera Pelléas et Mélisande.

Debussy began work on La mer in Paris in 1903 and completed it the following year in Eastbourne, a fashionable seaside resort on the south-eastern coast of England. In this music he drew on a number of influences and memories, particularly the work of the Japanese artist Hokusai, whose fascinating print The Deep Sea Wave off Kanagawa he requested to be reproduced on the cover of the score. Caught up in the music too was the memory of a frightening storm which Debussy had experienced while in a fishing boat off the coast of Brittany. 'Now here is a type of passionate feeling I have not experienced before', he wrote. 'Danger! It is not unpleasant—one is alive.' La mer’s broad, three-movement form allies it to other French works of similar dimensions: the symphonies of Franck, Chausson and Dukas, the Symphony on a French mountain air by Vincent D’Indy and the Three Dances for orchestra of Maurice Duruflé. Throughout the three ‘sketches’, as Debussy termed them, there is music of extraordinary sensitivity, rhythmic complexity and variety of timbre, highlighted by stunning orchestral effects and shattering climaxes shaped with superb mastery into perhaps the most powerful and imaginative musical response to the wave-tossed sea ever penned.

In the original score’s final movement—eight bars before figure 60—Debussy wrote a brief sequence of striking ‘fanfares’ for brass which, as music critic Noel Goodwin once wrote, 'shine out like a sudden shaft of sunlight above the rest of the orchestra'. The reason for their deletion from subsequent printed editions remains mysterious, so Geoffrey Simon joins that select band of conductors who prefer their inclusion, heightening as they do the musical and dramatic build-up to the climax of the work.

Bruyères (orchestrated by Percy Grainger)
Upon seeing the score of Pelléas et Mélisande in 1902, the Australian-born piano virtuoso and composer Percy Grainger was inspired to become an early exponent of Debussy’s solo piano music. Bruyères comes from the 'Second Book of Twelve Preludes' (published in 1913) where it is the fifth of the set. The music’s inspiration lay in what seems to have been Debussy’s purely imaginary vision of the Scottish heathlands. In this arrangement, the composer’s subtle evocation of bagpipes is delicately captured by Grainger’s inventive instrumental combination of woodwinds, horn, alto saxophone and harmonium.

Danse (orchestrated by Maurice Ravel)
Another early piano piece, written in 1890, takes within its title the Austrian province of Styria, just north of the Italo-Yugoslavian border. A tarantella is a fast Neapolitan dance that can be found in the works of many other composers besides Debussy. Ravel’s orchestration, first conducted by Paul Paray in 1923, has all the instrumental glitter and panache of Ravel’s own Alborado del Gracioso, to which it becomes almost a kind of companion piece.

Children’s Corner (orchestrated by André Caplet)
This charming suite for piano was dedicated by Debussy to 'my dear little Chouchou, with her father’s affectionate apologies for what follows'. Apologies for his English rather than the music perhaps; 'Jimbo' and 'Golliwogg' were affectionately retained by his publishers for posterity.

Debussy’s daughter was nearly four years old when Children’s Corner was published in 1908, and two years later André Caplet, a close friend of Debussy’s, conducted his own orchestral arrangement of the suite in New York. Debussy praised the orchestration as 'gorgeously apparelled' but asked Caplet in some concern for a report on the performance: 'I should be sorry if it looked pretentious.'

Golliwogg’s cake-walk—the best-known item in the set—mixes jazz and Wagner, whose Prelude to Tristan and Isolde is briefly satirised. Debussy’s former reverence towards the German master had by now turned into something akin to total opposition.