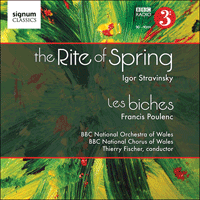 The conclusion to a three part-series of Igor Stravinsky's ballets from Sergei Diaghilev's Ballet Russes (following albums of The Firebird and Petrushka), performed by BBC National Orchestra of Wales under Thierry Fischer. These recordings capture the excitement and vibrancy of the BBC National Orchestra of Wales in live performance at their home of BBC Hoddinott Hall, Wales.

Almost no musical work has had such a powerful influence or evoked as much controversy as Stravinsky's ballet score The Rite of Spring. The work's premiere on May 29, 1913, at the Théatre des Champs-Elysées in Paris, was scandalous. In addition to the outrageous costumes, unusual choreography and bizarre story of pagan sacrifice, Stravinsky's musical innovations tested the patience of the audience to the fullest.

This album also features Francis Poulenc's ballet Les Biches, premiered at the Ballet Russes in 1924. Originally commissioned by Diaghilev to write a piece based on Glazunov's Les Sylphides, Poulenc instead chose to base his piece on the paintings of Watteau that depicted Louis XV and various women in his 'Parc aux biches'

'Thierry Fischer's French sensibility is evident from the very start of this brightly lit and articulate Rite: a provocative and teasing rubato in the opening bassoon solo immediately hints at the sexual and the chic … the precision of the Welsh orchestra is impressive, the clarity and vitality of the sound throwing up detail that one thought had long since stopped being surprising' (Gramophone)
'The much-improved regional orchestra's take on Stravinsky’s Rite is as exciting as it is lucid and clear-cut. Yet conductor Thierry Fischer also makes much of the many lyrical passages which counteract the prevailing frenzy. Another Diaghilev ballet, Poulenc’s Les biches is performed with its original choral contributions. The music is the epitome of the Jazz Age but also has its more serious moments' (The Daily Telegraph)

Here are two ballets which at first glance may appear poles apart aesthetically—one of them atavistic, violent and ‘primitive’, the other sophisticated, elliptical and ‘chic’. Yet both have in common the subject of sex; more specifically, both focus on the role of women in the rituals of sex and sexual attraction. The differences between the two ballets are not merely one being set in ancient Rus’, and the other in a fashionable house party in 1920s Paris: the ‘primitive’ ballet was the work of several male artists—not least the legendary dancer Vaslav Nijinsky who created its choreography—while the other was essentially the work of Nijinsky’s sister, the remarkable Bronislava Nijinska.

The Rite of Spring, almost overnight, established Stravinsky as one of the early 20th century’s great revolutionary composers. But how did this extraordinary and nightmarish masterpiece come about? Stravinsky subsequently claimed he was inspired by a dream he had in the spring of 1910, when he was finishing The Firebird: “I saw in imagination a solemn pagan rite. Sage elders, seated in a circle, watched a young girl dance herself to death. They were sacrificing her to propitiate the god of spring”. To help realise the scenario of his ballet, initially called ‘The Great Sacrifice’, Stravinsky turned to the archaeologist, painter and designer Nicholas Roerich.

Closely associated with the Ballets russes from its birth, Roerich had designed the costumes for two key productions in its inaugural year of 1909: the phenomenally successful Polovtsian Dances (from Borodin’s opera Prince Igor), and Ivan the Terrible, Diaghilev’s adaptation of Rimsky-Korsakov’s Maid of Pskov (which launched the great bass singer Chaliapin’s career in the West). But what made Roerich a particularly suitable collaborator for Rite was his specialist knowledge of ancient Slavic culture and rituals. Several of his paintings already foretold the ballet’s subject matter, with titles such as The Elders Gather (1898), Idols (1901), Ritual Dance (1904) and Yarilo’s Gully (1908), Yarilo being the ancient Slavonic sun god.

Later there were furious claims and counterclaims by composer and artist as to whose conception The Rite of Spring truly was, but it seems likely that Stravinsky first presented his idea of a sacrificial dance to Roerich, who then developed the rest of the scenario. For instance the ‘Abduction’, when the male dancers pursue and make off with young female mates, was taken by Roerich directly from Nestor’s Primary Chronicle which describes the “lawless” practices of unbaptized tribes in which men—after various games—“carried off wives for themselves, each taking any woman who whom he had arrived at an understanding”.

The ballet’s final and most controversial element was Nijinsky’s choreography. Diaghilev’s leading male dancer had already created strikingly unorthodox choreography for Debussy’s Prélude à l’après-midi d’un faune, inspired by the stylised poses depicted in ancient Greek art. In Rite, he deliberately negated everything classical ballet had aspired to in presenting the human body: whereas previously choreographers had aimed to make the body seem graceful, light and almost capable of flight (an illusion of which Nijinsky the dancer was a master), Nijinsky made his dancers appear heavy-footed, awkward and angular with feet turned inwards and elbows pressed to the sides of their body.

It was this, rather than Stravinsky’s music, which caused the notorious riot at the ballet’s premiere at the new Théâtre des Champs-Elysées on 29 May 1913. Some noises of disapproval were heard during the Prelude, launched by a solo bassoon playing at a fearsomely high tessitura, but—as Stravinsky recalled late in his life—when the curtain rose “on the group of knock-kneed and long-braided Lolitas jumping up and down, the storm broke”. Counter-protests and fisticuffs broke out as the students in the theatre’s standing room, situated between the boxes and stalls occupied by the more affluent section of the audience, turned on their wealthy neighbours to defend the modern ballet. In the hubbub, Stravinsky’s music went largely unheard, and was not to be properly appreciated by the public until its triumphant first concert performance a year later, conducted by Pierre Monteux (who had also conducted the ballet’s premiere).

Stravinsky scored Rite for one of the largest orchestras ever gathered for a ballet including quadruple woodwind, a large brass section and a percussion section which includes five timpani, crotales and a güiro. However his real achievement was to break the rhythmic regularity of Western music’s written barline, and to effectively convert the orchestra into a great percussive instrument; this he did less through his use of his actual percussion, used relatively sparingly in the ballet, but more through the aggressive use of dissonances created for their intrinsic sound rather than for any sense of classical resolution (a logical extension to the harmonic innovations of Debussy), most famously in the stamping rhythms of the ‘Dance of the adolescents’.

Despite the work’s enormous reputation, the ballet had less than a dozen performances before it abruptly fell out of the company’s repertoire with the dismissal of Nijinsky (who, as Diaghilev’s former lover, had committed the cardinal sin of getting married). However Diaghilev’s favour—this time entirely professional—then fell upon Vaslav’s sister, Bronislava Nijinska, whom he appointed the company’s chief choreographer in 1921. She was to hold that post exclusively until 1925. During that time she choreographed several major ballets including Stravinsky’s Les noces, Milhaud’s Le train bleu, and Poulenc’s Les biches.

Les biches had a long gestation, instigated early in 1922 under the title Les desmoiselles by the couturière Germaine Bongard (rather than, as sometimes stated, Jean Cocteau). From the outset, probably inspired by the recent production of Stravinsky’s Pulcinella, Bongard intended that the ballet should include singing (Poulenc ultimately set some 17th-century texts as choruses in three out of the ballet’s nine numbers). Diaghilev took a great interest in the project and expressed the hope that it would be a contemporary Sylphide for the 1920s. Poulenc responded with a light-hearted and witty series of dances, neo-classical in style (including a direct quote from Mozart’s Prague Symphony in the Final), yet which breathe the spirit of the Jazz Age. Ironically so, since he later confessed to disliking jazz; yet Poulenc made a passable impression of its lively style in the Rondeau, albeit with syncopations which perhaps owe more to the Spanish rhythms of the ballets by his friend Manuel de Falla; and of course in the Rag-Mazurka, which incidentally contains the ballet’s other blatant quotation—from Chopin’s Polonaise in F sharp minor. And the ballet brilliantly evokes its post-war world, not least the brittle wit and lightly worn erudition of its fashionable society as suggested by those fleeting quotations.

The ballet’s designs by Marie Laurencin, a close friend of the poet Apollinaire, included a drop curtain depicting what appear to be a couple of women with deer and horses, mixing and even confusing human with animal. It was this ambiguity which finally inspired Poulenc to find the present title, which can be either translated ‘female deer’ or ‘darlings’.

Though its setting is clear enough, Les biches does not present a story, but rather situations or the dynamics of certain sexual relationships. It has been plausibly suggested that the choreographer Nijinska, no beauty herself, made the ballet an expression of her jaundiced view of the female stereotypes women were expected to play early in the 20th century. Nearly all the protagonists are trapped in conventional gender roles. The three athletes, who enter a room of preening women, show off all the bravura leaps of male ballet dancers (during the ‘Chanson dansée’) but perform each action in unison and abruptly rather than within a flowing dance: Diaghilev was delighted, reporting that the dancers performed “weightily, like three cannon”—clearly this is a trio of butch poseurs. By contrast comes the androgynous Garçonne—often known as the girl in blue—dressed in a very short, blue velvet coat, white tights and white gloves, who enters and crosses the room sur les pointes to Poulenc’s Adagietto, “a very supple dance in 2/4 time” (to quote the composer). Her costume was in fact one of Diaghilev’s contributions to the ballet. The dancer, Vera Nemchinova, had originally appeared in rehearsal dressed in a long velvet frock-coat; disliking its appearance, Diaghilev took a pair of scissors and cut away its collar to make a wide V-neck, then proceeded to drastically reduce the length of the coat. “I feel naked!” protested Nemchinova as Diaghilev exposed the full length of her legs. “Then go and buy yourself some white gloves!” retorted the impresario.

Nijinska herself danced the hostess (whose big number is the ‘Rag-Mazurka’), a character who for all her feminine accessories—Chanel pearls, cigarette holder and plumed headdress—dances with a vigorous, masculine style, so subverting her sexual stereotype. Only two young girls dressed in grey—Sapphic yet innocent—appear unaffected and genuine in their mutual attraction (in ‘Petite chanson dansée’).

Poulenc was absolutely delighted by Nijinska’s work, writing to a friend: “The choreography of Les biches is a masterpiece. It is ravishing from beginning to end and exactly what I wanted”.