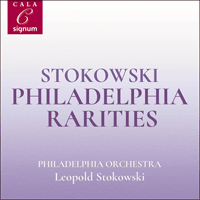 Originally issued privately under the aegis of the Leopold Stokowski Society in 1993, this unique collection of restored recordings fully demonstrates Stokowski's incredibly wide-ranging musical sympathies, from melodies centuries old to colourful Iberian and Oriental works, together with music of twentieth-century America.

'The Golden Age of Leopold Stokowski and the Philadelphia Orchestra' describes those great years, covering more than a quarter of a century, during which the London-born church organist took a provincial American ensemble and, from 1912 onwards, built it into one of the finest orchestras in the world, noted for its precision, virtuosity, and splendid tone-colour. With the advent of the microphone during the 1920s, Stokowski and the Philadelphia Orchestra made an enormous number of 78rpm records which became landmarks in recording history. For much of the time, Stokowski concentrated on basic repertoire, such as the orchestral music of Beethoven, Brahms, Tchaikovsky, Sibelius, Debussy, Mussorgsky and many others, as well as excerpts from Wagner’s operas and, above all, his own orchestrations of Bach’s keyboard works.

Side-by-side with familiar pieces, however, went a number of works which no one else had recorded before or, indeed, has recorded since! And, although Stokowski was to record certain compositions several times over during his long career, there were a number which he recorded only once—on 78s made with the Philadelphia Orchestra. This unique collection (which previously appeared on a ‘Limited Edition’ CD in 1993, issued exclusively for members of the Leopold Stokowski Society) brings together just those items which fall into this 'rarities' category, and it demonstrates Stokowski’s incredibly wide-ranging musical sympathies. It covers many periods and styles, from melodies centuries old to colourful Iberian and Oriental works, together with music of 20th-century America.

The programme begins with Stokowski in his role of transcriber as well as conductor. The Two ancient liturgical melodies were hymn-tunes long familiar to him from his early days as a choirmaster in London and New York, and he made this orchestral arrangement of them in 1934. Veni Creator Spiritus dates from the 9th century and is known as 'Come Holy Ghost, our souls inspire', while Veni Emmanuel ('O come, O come Emmanuel') was composed during the Middle Ages, and can also be heard in Respighi’s Three Botticelli Pictures. In Stokowski’s sonorous transcription, the two pieces are linked together by the solemn chimes of a bell.

Although Love the Magician by Manuel de Falla (1876-1946) was given its American premiere by Stokowski and the Philadelphia Orchestra in 1922, his only 78rpm recording of any of Falla’s music with that orchestra was of the 'Spanish Dance' from La vida breve, a gypsy story of love and infidelity. It is a scintillating number, taken from a wedding scene in the opera, and is beautifully performed under the Maestro’s inspired direction.

The next piece also comes from Spain. Joaquín Turina (1882-1947) was a contemporary of Falla and wrote his first set of Danzas Gitanas (Gypsy Dances) for solo piano in 1930. This bold and brassy orchestration of the final number in the set, 'Sacra monte' ('Sacred mountain'), was made by Lucien Cailliet, a long-time member of the Philadelphia Orchestra who also doubled as their ‘house-arranger’. This 1937 recording is the only music by Turina which Stokowski recorded in Philadelphia (and very brief it is!) but it remained unissued on 78s and has only become available to the public on this CD release, over fifty years later.

In 1921, Arcady Dubensky (1890-1966) left Russia, where he had trained at the Moscow Conservatory, to become a violinist in the New York Philharmonic and pursue a career as a composer. Stokowski took a great interest in Dubensky’s music and premiered a number of his works, including the 'melo-declamation for narrator and orchestra' on Edgar Allan Poe’s The Raven, a macabre poem first published in 1845. This curiosity had its first performances in the Philadelphia Academy of Music in 1932, and RCA Victor experimented in recording the work onto 35mm optical film during the actual concerts. The result was issued on two special 78rpm 'Picture Records', whereon the poem, together with monochrome engravings of Stokowski and Edgar Allen Poe, were etched into the shellac. A young singing student named Benjamin de Loache, who had already taken part under Stokowski’s direction in the US premieres of Mussorgsky’s Boris Godunov, Alban Berg’s Wozzeck, and Schoenberg’s Gurrelieder, now found himself with the dramatic ‘starring role’ in the Dubensky novelty. He died an octogenarian in 1994, having been especially delighted at the reissue on CD of The Raven, as it had been one of the rarest recordings Stokowski ever made.

Stokowski was always fascinated by Oriental music and this is reflected in several of the items heard on this disc. The first of these is an arrangement of ancient music for modern instruments by the Japanese aristocrat Hidemaro Konoye (1898-1973). Before the Second World War he headed the Imperial Music Academy in Tokyo, founded the Japanese New Symphony Orchestra, and guest-conducted in America and Europe. In the preface to his 1931 score of Etenraku (Music coming from heaven) he wrote: 'This dates from the 8th or 9th century and is said to have been composed by an emperor. It is a Solemn Prelude, like an approaching procession, and has been performed for a thousand years at the Imperial Japanese Court”.

An American composer closely associated with the Philadelphia Orchestra was Harl McDonald (1899-1955), who was born in Colorado. An early musical education led him to join the Los Angeles Philharmonic and he later became a concert pianist. He entered the Philadelphia Musical Academy in 1924 and from there took up the post of choral conductor at the University of Pennsylvania. Stokowski actively promoted McDonald’s composing career by introducing his first symphony (The Santa Fe Trail) in 1934, one of many McDonald works premiered by the great conductor. Stokowski also championed the composer on 78s, and we hear next a group of three short pieces in McDonald’s ‘lighter’ vein.

The Legend of the Arkansas Traveller, composed in 1939 (the same year in which McDonald became general manager of the Philadelphia Orchestra), is a Humoresque subtitled 'Concert Paraphrase on an Old American Fiddle Tune'. This derives from one of the best-known folk-songs of the South and describes an old farmer playing the fiddle on his porch when a traveller stops by to ask for directions. He receives ‘smart’ answers from the farmer who clearly knows only the first part of the folk-tune. When the traveller shows how the piece should end, however, he is immediately invited in for a booze-up and several hours of delightful fiddling. McDonald introduces the sounds of the farmyard (cockerels crowing, donkeys braying) as well as the old farmer tuning up; with the folk-song itself played virtuoso-style by both violin soloist and the full string section.

The Festival of the Workers is a three-movement suite which was given its first performance by Stokowski in 1934. The second movement, entitled 'Dance of the Workers', is a minor trifle indeed, but nevertheless Stokowski lavished just as much care on this as on any of the really great music he recorded during his Philadelphia years.

In 1935, Stokowski premiered Harl McDonald’s second symphony (Reflections upon an Era of Turmoil), a work which was primarily concerned with the Great Depression of America. 'But', the composer added, 'this was also an age that had an insatiable appetite for gaiety and entertainment', and it was this aspect of the times which he illustrated in the third movement of the work. This symphonic Rhumba proved so popular that it was published as a separate concert item, and recorded that way on the 78rpm disc heard here, with Stokowski and his Philadelphians letting rip in the manner of the ‘big bands’ of the 1930s.

The 'Japanese Nocturne' is the third movement of the Oriental Impressions suite by Chicago-born Henry Eichheim (1870-1942), first heard in Boston under the composer’s direction in 1922. It features tunes which he took down from a blind player of the ‘shakuhachi’ (a kind of bamboo flute) and is a most evocative little piece. The inclusion at the end of a ‘fish head drum’ (or Chinese wood-block) brings Stokowski’s superbly atmospheric performance to a close.

During 1927, Stokowski requested leave of absence from the Philadelphia Orchestra so as to make a tour of the Far East, and the following season his place on the rostrum was taken by a series of eminent guest-conductors. He visited India, Burma and Java, before arriving on the South Sea island of Bali, and was accompanied by Henry Eichheim, who was studying the music of the region and writing works inspired by oriental motifs. The outcome of this particular visit was Bali—a continuous set of ‘symphonic variations’ on themes heard by Eichheim in a Balinese temple courtyard. The inclusion of the ‘gamelan’ orchestra’s bells and gongs effectively convey the music’s exotic quality, and the piece was duly premiered by Stokowski and the Philadelphia Orchestra on 20 April 1933.

We return to the music of Harl McDonald, which reflects not only his background (his childhood was spent on a cattle-ranch and there is always a Coplandesque element of the ‘out-doors’ in his work) but also his interest in what he described as the 'Hispanic-Indian Anglo-Saxon combination of the Mexican border region'. This influence presents itself in his double piano concerto, which falls into the traditional three-movement European pattern, and was first heard in a Stokowski/Philadelphia concert on April 2, 1937. A richly scored, broadly melodic first movement has the occasional feel of Brahms or Rachmaninov dabbling in South American dance music, and features an extended cadenza for the two soloists. The second movement is a theme and variations in which a simple tune is subjected to (a) a bright scherzo; (b) a solemn adagio; (c) a rhythmic dance episode; and (d) a chorale for brass and winds. The finale is based on the Juarezca, a jazz-inspired Mexican dance, in which the hair of all concerned is well and truly let down, and it completes this selection of all the recordings which Stokowski made of Harl McDonald’s music.

And so to two Concert Marches by John Philip Sousa (1854-1932), one of the best known American composers. These are Stokowski’s only recordings of these particular Sousa Marches, though, as with the Turina piece heard earlier, Manhattan Beach has languished in the vaults until its issue on this CD. Together with El Capitan, however, it provides a lively and rousing conclusion to an album of unusual, exotic and highly-varied fare indeed.