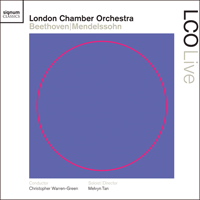 The London Chamber Orchestra, the UK’s oldest chamber orchestra, has nurtured the new and paid homage to the traditional since 1921. Since 1988 Principal Conductor and Music Director Christopher Warren-Green has brought together the inspirational musicians and repertoire for which LCO is renowned. The remarkable acoustic and intimate ambience of St. John’s, Smith Square, its London home, enable the LCO—the only chamber orchestra resident in London—to give vibrant performances and establish a close rapport with its audiences. The recordings on the LCO Live label, in partnership with Signum Classics, are the result of this happy marriage of orchestra and venue. Future releases include Mozart’s Symphony No 1 and Beethoven’s ‘Ah Perfido!’

'The relatively small chamber produces an impressively robust, powerful sound that is warmed up nicely in the orchestra's traditional venue of St. John's, Smith Square in London. This results in a nice, punchy bass section and timpani throughout the Beethoven' (AllMusic, USA)» More

Beethoven was asked in 1809 for music to accompany a Viennese production of Goethe’s eponymous play. He complied, fired with enthusiasm for its themes of national liberation and personal heroism, though not so much so that he could meet the deadline: the overture was only ready for the play’s fourth night in June 1810. The story is set in sixteenth-century Flanders. Egmont, a Flemish nobleman, is in love with Clärchen. His attempts to moderate tyrannical rule of the Duke of Alba meet only with arrest and excution; grief-stricken, Clärchen poisons herself. Egmont’s death becomes both tragedy and triumph because his spirit lives on to inspire the successful uprising of his people against their oppressors.

Beethoven’s response is inspired both by his love for Goethe and his enthusiasm for the post-Revolutionary wave of French composers, which lent to his works around this time (notably the Emperor Piano Concerto and Fifth Symphony) their temperament and sometimes even their ideas. Beethoven owned a copy of Cherubini’s opera Medée, for example, and his overture owes more than its key to the Frenchman’s.

But really the differences are much more striking than the similarities. Where Cherubini is all bustle, a domestic scale for a domestic tragedy, the huge, slashing chords of Beethoven’s opening, the painful chromaticism of its introduction, groping for resolution, and the sledgehammer chords that punctuate its harried Allegro theme: these are universal in ambition. The sledgehammers don’t even let up from the second theme in the woodwinds, shapely but never without the sense of fate pressing close on its heels. It is those chords that finally overwhelm all lyrical impulse: the execution is graphically achieved. And at the moment of lowest despair is the highest suspense, where a new tonic is found, C after the F minor darkness, and the Victory Symphony rings out with unstoppable ebullience. This is music of the barricades.

Mozart was still alive when, in 1787, Beethoven started work on a piano concerto in B flat: only 13 years later would it finally be played in the form we hear it today.

During that time Beethoven’s life and work had undergone a sea-change: a concerto in C major had been written and published (which is why the B flat is known as No 2) and he had travelled miles, physically andemotionally, from an eager-to-please lad in Bonn to a young turk in Vienna. It would take a novelist to trace this journey through the concerto, but we can hear clearly enough the sophistication of the finale’s repartee in comparison with the more abrupt turns of event of the first movement. Off the piano runs and the orchestra chase after, before apparently offering more weighty second thoughts. Nothing loth, the piano proposes an even more skittish idea—and later twirls the orchestra round its finger still further with loopy jumps and stamping accents on the wrong beat of the bar. We’re even left to think that the concerto will sign off with a shrug before good order is finally restored.

But more quietly original still is the tiny recitative for the piano at the end of the slow movement. This has proceeded in a gently contained, almost Mozartian fashion from its hymn-like opening (though without the older composer’s concentration on the wind instruments: here, everyone is subordinate to the composer/keyboard), elaborating and decorating, and moving into some unexpected keys, the last of which brings the orchestra to a head. In response, the pianist explores a return to the theme, third by third, helped by the orchestra. When fully appreciated by both performers and audience, it is a moment of true, Beethovenian communion.

The climate of Mendelssohn’s home town of Leipzig was hardly different to our own, and when he toured Italy in 1831 he seems to have been struck by the same burst of light that meets modern-day travellers as they step off the plane. The symphony’s opening bars and fanfare-like melody radiate with solar energy. Only at the start of the development does a pause for breath present itself, but a theme of definite military character enters, at first almost unnoticed on the violins, but it soon gains vigour and strength, and it competes with the main melody until the end of the movement.

Mendelssohn’s thorough-going but liberal education is everywhere evident in this symphony. Just as the first movement translates his painter’s eye into musical light and shade, his literary accomplishments lend the second its gravitas. His letters and drawings while on tour attest to his awe at finally laying eyes upon the ruins of Rome’s imperial glory, after his years as an avid classical scholar. His account of the Holy Week processions through Rome also fits the steady, sombre tread of the theme in the bass. Two flutes wind their way around each other at one point like trails of incense, before dissonant clarinets add a sharper tang to the harmony. There may also be a personal inspiration in the form of a memorial to his childhood composition teacher Carl Friedrich Zelter, who died in 1832, before Mendelssohn revised the symphony for publication.

If anything it is the third movement which performs more of the traditional functions of a slow movement, though the minuet flows easily enough. The brightness of its soundworld is partly due to the (relatively rare for the time) ‘high’ key of A major, which the symphony shares with Mozart’s 29th—and more importantly with Beethoven’s Seventh. Beethoven’s work seems to have provided Mendelssohn a structural template for the ‘Italian’ Symphony, and the furious, danceinspired finale is only the most obvious correspondence. Saltarello does not imply a specific dance metre in its own right—it comes from the Latin saltare, meaning simply to dance—but Mendelssohn seems to have associated it with the wild and whirling tarantella of Naples. Taken at a true presto, the music seems to hang on for dear life—or for grim death. There is no resolution here, for the movement stays in the minor key until its final brusque send-off. As so often, Mendelssohn’s reputation for geniality is belied by a tension that here brilliantly reflects the intensity of Mediterranean life.