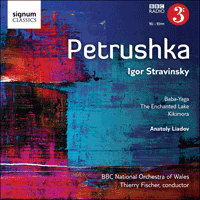 Petrushka follows 2009’s release of Stravinsky’s Firebird and is the second in a three-part series of works from Sergei Diaghilev’s Ballet Russes, performed by BBC National Orchestra of Wales under Thierry Fischer.

These recordings encapsulate the vivacity and passion of Stravinsky’s tale of three life-sized puppets, seemingly brought to life. The album also features three works by fellow Russian and Ballet Russes composer Anatoly Liadov: dark and dramatic tone-poems on Slavic witches and demons in Babayaga and Kikimora, and a tranquil and fairytale-like portrait of the Russian countryside in The Enchanted Lake.

In 1910, before he had quite completed his first ballet The Firebird, Stravinsky had his now famous dream about 'a solemn pagan rite', the inspiration for his most revolutionary work, The Rite of Spring. Before embarking on composing that ballet for the Ballets Russes, though, and recognising that it would be 'a long and difficult task', Stravinsky decided he 'wanted to refresh myself' with a lighter orchestral piece; so he started work on a Konzertstück for piano and orchestra. In an interview published in Les nouvelles littéraires, Stravinsky claimed that in his 'initial conception, I saw a man in evening dress, wearing his hair long: the musician or the poet of Romantic tradition. He sat himself at the piano and spun contrary ideas at the keyboard, while the orchestra burst out with vehement protests, with sonic fisticuffs'. However, Stravinsky soon found a more vivid image—of 'the droll, ugly, sentimental, shifting personage who was always in an explosion of revolt'. This was the popular Russian puppet character, Petrushka.

Stravinsky played his Konzertstück-in-progress—now titled 'Petrushka’s shout'—to the director of the Ballets Russes, Serge Diaghilev. The impresario was so delighted by the music’s caustic style that he immediately proposed that this, too, should be turned into a ballet (years later the impresario gave a similar response when he first heard the young Prokofiev’s Second Piano Concerto). And for Diaghilev, the obvious man to collaborate with Stravinsky on developing this puppet-inspired work was Alexander Benois.

Benois had not only been a prime instigator behind Stravinsky’s Firebird ballet, but had also adored the result, most particularly Stravinsky’s music. However he had just fallen out with Diaghilev over a mis-credit printed in the programme books for the 1910 season, in which the scenario of the ballet to Rimsky-Korsakov’s Sheherazade (the Ballet Russes’ other big hit, together with Firebird, of that year) was attributed to Léon Bakst rather than Benois. Retiring to Lugano in high dudgeon, Benois wrote to Diaghilev that he would have nothing more to do with his ballet company. But Diaghilev now enticed Benois back, not only using the lure of collaborating with Stravinsky but also playing on Benois’ enthusiasm and expertise on the St Petersburg Shrovetide carnival, where puppet shows such as Petrushka weretypically staged. Benois’ childhood experience of these carnivals became crucial to the final ‘feel’ of the ballet, since Stravinsky himself was too young to have witnessed such a carnival—except in dramatised form when he watched his baritone father, Fyodor Stravinsky, perform in Serov’s opera The Power of the Fiend.

It was Benois who began the transformation of Petrushka from rebellious mischief-maker (closely related, in fact, to the English Punch) to the tragicclown of the ballet. He did this by drawing on the Commedia dell’Arte tradition of the Harlequinades in which Pierrot (a distant relation of Petrushka) is involved in a love-triangle with Columbine and Harlequin—such as Benois would again have seen staged in fairs during his childhood. Benois’s scenario involves three life-sized puppets, seemingly brought to life: Columbine is here presented as a pretty but stiff-limbed Ballerina, whose affections both Petrushka and the gaudily dressed Blackamoor (into which Harlequin was transformed) vie for. With such a scenario, and given Petrushka’s violent temperament, Benois had originally envisaged that Petrushka would finally kill the Blackamoor in a fit of jealous rage. Stravinsky, however, insisted that it should be the Blackamoor who kills Petrushka, so turning the hero into a hapless victim and so perhaps a more resonant figure. Choreographed by Mikhail Fokine (as had been The Firebird), the ballet was a phenomenal success from its first performance at Paris’s Théâtre du Chatelet on 13 June 1911, and is still regularly hailed as one of the greatest achievements not only of the Ballets Russes but of all ballet repertoire.

The action takes place in Admiralty Square, St Petersburg, in 1830 during the festive Maslenitsa (Butter Week) which precedes Lent. Stravinsky brilliantly portrays the lively, milling crowds and the music coming from a roundabout and various rival attractions at the fair. After the initial hubbub, the music snaps into focus as a party of peasants stamp to the accompaniment of a concertina; a second, calmer interlude follows as a street dancer performs accompanied by a hurdy-gurdy (Stravinsky uses conventional orchestral instruments to vividly imitate these street instruments). More crowd activity, then suddenly an interruption by a rumble of drums heralding the appearance of the showman. To eerie music, including an interlude while he plays his flute to enchant his audience, the showman unveils his three puppets and brings them to life for a dance.

Scene 2 (using the music of Stravinsky’s original Konzertstück) is set in Petrushka’s cell, theforlorn puppet seeking to escape his prison. A brief appearance by the Ballerina only goads him further in his efforts, and he eventually tears a hole in the wall.

Scene 3 is in the luxuriously appointed room of the gaudily dressed but simple-minded Blackamoor. Eventually a trumpet fanfare heralds the stiff-limbed entrance of the Ballerina. She dances to the Moor’s delight, and eventually he draws her onto his lap; at this point the jealous Petrushka enters, only to be chased out again by the Moor.

Scene 4 is the Admiralty Square, later that evening but still filled with a lively crowd. The music drops in volume as a group of nursemaids dance among themselves (solo oboe introducing the well-known Russian folk song ‘Along the Road to Piter’, ie St Petersburg). Just as this is reaching towards a climax, a sudden shriek by the orchestra heralds the appearance of a lumbering performing bear. A gypsy dance follows, then a lively dance by the coachmen. Scurrying music with grotesque downward glissandi introduces a group of revellers in masks (an incident Stravinsky introduced to the scenario, remembering a similar scene from Serov’s opera). Suddenly a commotion in the puppet booth becomes apparent, and Petrushka bursts out with the Blackamoor in pursuit; before agitated onlookers, Petrushka is struck down by the Blackamoor’s scimitar. The police are summoned, but the showman demonstrates that Petrushka is a mere puppet, shaking some sawdust out of his head to prove it. The crowd disperse, and the showman begins to drag the lifeless puppet away. Then suddenly, to the piercing sound of a muted trumpet (a deliberate imitation of the kazoo-like sound of the authentic Petrushka), the ghost of our hero appears to taunt the showman and also—possibly—the ballet’s audience.

Anatoly Liadov was the composer Diaghilev famously failed to get to write The Firebird before turning to Stravinsky. Despite this, Diaghilev eventually staged a ballet (choreographed by Leonide Massine who by 1915 had replaced the over-demanding Fokine) based, in its final form, on no less than four works by Liadov, three of them included in this recording. Its starting point was Liadov’s Kikimora, a tone poem—composed in the same year as Stravinsky’s Firebird—describing the malicious female demon ('her head no larger than a thimble and her body no wider than a strand of straw', according to Liadov’s programme note) who traditionally haunts every Russian household, disturbing children with whistling and screeching at night, and causing death to all who see her spinning her flax. First staged during the First World War in San Sebastian, Spain in 1916, the ballet proved so successful that it was soon extended with further episodes based on Liadov’s Enchanted Lake of 1910 (made into a dance of the Swan-Princess) and his portrait of the Russian witch Baba-Yaga (1904), the three episodes linked with numbers from his Eight Russian Folk Songs. In its final form the ballet, now titled Contes Russes, was first staged at the Coliseum Theatre in London, 1919.