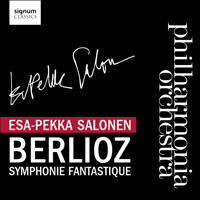 Since September 2008 Esa-Pekka Salonen has been Principal Conductor and Artistic Advisor of the Philharmonia Orchestra. In his first season in this role he devised and led City of Dreams, a nine-month exploration of the music and culture of Vienna between 1900 and 1935. The project, which presented the music of Mahler, Schoenberg, Zemlinsky and Berg in its social and historical context, travelled to 18 cities across Europe, culminating in October 2009 with semi-staged performances of Berg's Wozzeck, with Simon Keenlyside in the title role. A series of recordings from the project is being released on the Philharmonia/Signum label, of which Gurrelieder is already available.

A young musician of melancholic sensitivity and morbid imagination poisons himself with opium in a moment of hopelessness caused by frustrated love. The narcotic, while too weak in dosage to cause his death, sinks him into a deep sleep in which the strangest visions appear. His experiences, feelings and memories are translated in his feverish brain into musical thoughts and images. His beloved becomes for him like a melody, an idée fixe which he meets and hears everywhere.

So begins Berlioz’s programme for his First Symphony, the Symphonie fantastique, finalised in 1855, a quarter of a century after the young composer had first unleashed this extraordinary work on an unsuspecting Parisian public. First performed on 5 December 1830, it lent a suitably revolutionary musical coda to a year in which Europe witnessed a number of uprisings, from the liberation of Greece from Ottoman rule in February through the July Revolution in France, followed by the Belgian and the Polish insurrections in August and November respectively. Berlioz’s revolutionary credentials had already been established through his arrangement of La Marseillaise for chorus and orchestra in 1830, sometime before the first performance of the Symphonie fantastique—a massed forces treatment which earned him great respect in a letter from the aging Rouget de Lisle, the composer of La Marseillaise himself, who but for his death may well have collaborated with the young composer on further projects.

Berlioz had an unspectacular early musical training, on the family estate, initially from his liberal-minded physician father on the flageolet and later lessons on the flute and guitar from local teachers. He remains perhaps the only great composer after the Baroque era who could barely sketch more than a few chords on a keyboard. His other singular quality for a great composer is his gift of reaching forward, through the ages, not only with his music, but with his brilliant writings. His Mémoires remains one of the most exuberant and hilarious autobiographies yet written; packed with portraits of the musical great and the good of the day, unbelievable vignettes, dreams and nightmares and an unflagging sense of the ironic and the ridiculous. One moment he is praising his contemporaries and the next he is damning the music of possible benefactors, such as Cherubini, to their faces. The most entertaining of memoirs, it is no real surprise that Berlioz would compose a work based on the life of that other amazing artist, autobiographer and self-promoter, Benvenuto Cellini.

Relocating to Paris in 1821, Berlioz disappointed his parents by spending more time studying music and visiting the Opéra than attending to his degree in medicine which his father hoped would, in time, see him return home to take over the family business. This was never a realistic option and Berlioz continued imbibing the operas of Gluck, Spontini, Méhul and their contemporaries even when Berlioz senior temporarily severed his allowance. Joining Jean-François Le Sueur’s composition class in late 1822, the budding composer took instruction until ready to enter the Conservatoire in 1826, remaining under Le Sueur’s guidance at the institution. The big composition prize was the highly sought-after Prix de Rome which allowed the winner to study and compose for two years at the Villa Medici in Rome, the idea being that they would be inspired by the glories not only of antiquity but also of the Renaissance and Baroque eras to further inspire their artistic endeavours. It took Berlioz four attempts to win the prize, finally succeeding in 1830 with the cantata La mort de Sardanapale after previous efforts had been thought either unplayable or too avant-garde. The road to the Symphonie fantastique was just as rocky. A series of typically dramatic events formed the work in Berlioz’s mind. The most crucial of these was the concurrent introduction to Shakespeare and to the dramatic talents of the actress Harriet Smithson. She was playing Ophelia in an English production of Hamlet and, despite knowing little of the language, Berlioz was well aware that he was not only in the presence of a genius, in Shakespeare, but the love of his life, in Smithson. The next year, 1828, the love-smitten composer was thunderstruck by performances in Paris of Beethoven’s Third and Fifth Symphonies: ‘Beethoven opened before me a new world of music, as Shakespeare had revealed a new universe of poetry’. The idea of the symphony now set Berlioz’s imagination on fire, and the adoration and succeeding bitterness of his obsessive, one-sided adoration for Smithson was sublimated into his Symphonie fantastique with a vigour and inventiveness that was lacking among many a European symphonist of the day.

At the time, opera was heavily bankrolled by the French authorities, the state theatres receiving the lion’s share of the available funds. In contrast, orchestral music was in a relatively poor condition in Paris. Compared to most other European musical centres, orchestras not attached to the theatre were often amateur and were not high on the funding agenda. Although the symphonic genre would prove to be resilient, Beethoven’s nine essays were regarded by 1830 almost as the end point in the field. It was but a momentary blip in the symphony’s inexorable Romantic mission, but composers were certainly suffering from a crisis of creativity, burdened by Beethoven’s monumentalism. Wagner abandoned his own symphonic efforts in the early 1830s, agreeing with many a commentator that Beethoven’s Ninth had effectively delivered the final word on the symphony as a living, developing genre. Berlioz, however, had other ideas, and by the time his Symphonie fantastique had been performed a few times in Germany he was briefly hailed as Beethoven’s heir and the saviour of the symphony. The first performance of the Symphonie in Paris on 5 December 1830 was meticulously organised by Berlioz and earned him a resounding success. The spectacular programme distributed at the event both satisfied an audience used to operatic storylines and the press, who had published the details ahead of the première.

By 1835, Liszt was already performing his famous transcription of the symphony, garnering it yet more fame, and Schumann was penning a long critique of the work. Ever ready to help fellow composers, Liszt published his transcription of the Symphonie fantastique at his own expense, while Schumann’s six-part review of the Symphonie in his Neue Zeitschrift für Musik (New Journal of Music), was written at a time when his attentions were first being reciprocated by his own seemingly unattainable love, Clara Wieck. So, the Symphonie may well have held a two-fold fascination for him—in both the music itself and the attached programme.

Berlioz made numerous alterations to his programme for the Symphonie over some 30 years since the initial performances in 1830. He was at first keen to have texts issued when a companion piece, Lélio was performed in tandem with the Symphonie and later thought that the music itself would suffice with only the movement titles as clues to the content. But no performance of the Symphonie is quite as thrilling without the juicy storyline attached. The gist of his programmes is as follows:

Part 1: Rêveries – Passions: The Artist remembers a time before he even laid eyes on the love of his life; the aimless joys, sadnesses and spiritual unease, followed by the incredible, volcanic love that suddenly took hold of him, attended by fits of envy, delirious torture and a return to tenderness and religious solace.

Part 2: A ball: Amidst the tumult of a noisy festive ball, the Artist again discovers his beloved. Her image continues to torture him wherever he travels.

Part 3: A Scene in the countryside: The Artist listens to a pastoral duet between two shepherds which, together with the countryside setting and trees rustling in the gentle breeze, lends him a moment of rare tranquility. But not for long: the beloved re-appears anew in his thoughts and he is plagued by doubts—what if she has has not been faithful? He hears the shepherds’ tune again, but this time there is no answer, no duet. Thunder sounds in the distance as the sun sets. All is solitude and silence.

Part 4: The march to the scaffold: The Artist dreams that he has murdered the beloved and is sentenced to death. Being led to his execution, the processional march to the scaffold is variously doom-laden and ferocious or solemn and brilliant. Boisterous outbursts are followed by heavily measured footsteps. The beloved’s idée fixe re-appears, just for an instant before the fall of the axe silences the brief thought of love.

Part 5: Dream of a witches’ Sabbath: The Artist sees himself at a witches’ Sabbath where he is surrounded by spectres and sorcerers and monsters of every sort. They have come to witness his funeral. Strange utterances, moans, groans and distant cries echoing until his beloved returns—hesitantly at first—to join the black Sabbath. Having lost its innocence and nobility the idée fixe has mutated into a coarse, trifling and grotesque dance tune. The beloved is attending the diabolical orgy. The sound of the funeral knell is accompanied by a burlesque of the Dies irae plainchant melody. The dance of the witches and the Dies irae united.

Harriet Smithson did eventually attend a performance of the Symphonie fantastique, aware of her starring role in the proceedings. This was at a concert where the Symphonie’s companion piece, Lélio, ou Le retour à la vie was first performed. Smithson, through intermediaries appeared at the concert, met Berlioz and indeed married him in 1833. While their relationship was more or less happy, if somewhat tempestuous, for at least six years, Lélio, a diffuse melodrama, is now barely remembered as a partner for the Symphonie.

When Berlioz heard one of Beethoven’s Leonore Overtures, more than a decade after the Symphonie’s success, he was bowled over by it, calling it ‘a truly gigantic piece’. As ever, Berlioz was a musically astute chronicler, and although we can’t be certain which of the Leonore overtures he actually heard on this occasion, the Overture, Leonore No 2 is indeed a massive piece. So large that Beethoven eventually removed it from the opera Leonore (later to become Fidelio) in favour of a shorter, punchier, more appropriate opener. It is a masterpiece on its own, a veritable tone poem about the opera rather than the expected relatively brief lead-in to the opera’s first number. The subject matter of the opera, and by implication of the overture, ranges from the universal rights of man to the eventual re-uniting of the lovers of the piece, Leonore and Florestan, through an act of individual courage—a quality that Berlioz would have entirely applauded.