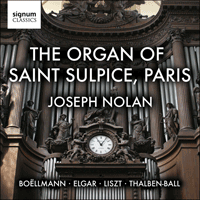 The organ of Saint Suplice, Paris

The Organ of Saint Sulpice, Paris, is widely considered to be a prime example of the pinnacle of nineteenth-Century French organ building. Joseph Nolan expertly demonstrates the full capabilities of this mighty organ with this programme of Romantic organ music, performing favourite works by Boëllmann, Elgar, Liszt and Thalben-Ball.

'A brilliantly played Romantic recital on an oft-recorded organ … with its 101 stops spread over five manuals this organ offers an incredibly rich palette of sounds he greatest revelations on the disc are the linked pair of pieces by Thalben-Ball … the Poema floats exquisitely and atmospherically preparing the ear for the distinctly Francophile and sparkling flavours of the Toccata Beorma' (Gramophone)
'The five manual Cavaillé-Coll in St Sulpice is a fine vehicle for the French and German romantic repertoire but a more challenging choice for works by Elgar and Thalben-Ball. Joseph Nolan’s approach … allows the music greater breadth and sensitivity … a very fine performer' (The Organ)» More

The church of St Sulpice, located in the Quartier du Luxembourg of the 6e arrondissement, is one of the more impressive and striking of Paris’s plentiful ecclesiastical buildings, and is second in size only to Notre-Dame de Paris. The church that stands today was begun in 1646 and not completed for over 130 years and combines a number of architectural styles including Roman, late-baroque and classical.

The imposing casework of the grand orgue that dominates the west end of the interior of St Sulpice was designed by Jean Chalgrin, one of the church’s numerous architects, who also designed one of the two iconic, yet mismatched, towers of the west façade. While the organ contained inside this epic case is mostly regarded as a large Romantic instrument, the current in a long line of veritable titular organists of this church, Daniel Roth, would argue that it is a successful fusion of the classical instrument completed in 1781 by François-Henri Clicquot, and the organ of Aristide Cavaillé-Coll, begun in 1857, that preserved much of Clicquot’s earlier work.

The succession of important and well-known organists of St Sulpice ensured an enduring respect and preservation of Cavaillé-Coll’s nineteenth-century instrument close to its original state, despite various minor alterations. From the date of completion of Cavaille-Coll’s organ, the list of organists reads as an indisputable ‘who’s who’ of the Parisian organ world: Louis James Alfred Lefébure-Wély (from 1863 to 1869), Charles-Marie Widor (1870-1934), Marcel Dupré (1934-1971), Jean-Jacques Grunenwald (1973- 1982) and, from 1985 to the present day, Daniel Roth. The organ itself was to be hailed as one of the three ‘100 stop’ organs of Europe and is still widely considered to be a prime example of the pinnacle of French organ building, retaining much of its original and revolutionary nineteenthcentury technology.

Despite the multifaceted nature of this magnificent instrument, its suitability for music of the Romantic era is undeniable. The versatility and range of colour available throughout the organ’s specification allows for the music of almost any era to be effectively and successfully realised. The wide-ranging, although overtly Romantic, programme of this recording—from Franz Liszt to George Thalben-Ball—demands much diversity of character from the organ, while demonstrating the instrument’s full capabilities.

Arguably the centre-piece of this programme is Liszt’s magnum opus for the organ the Fantasie und Fuge über den Chorale ‘Ad nos, ad salutarem undam’. Liszt’s works for the organ are not even close in number to the immense catalogue that he completed for the piano, mostly owing to his considerably greater accomplishment as a pianist. However, of those works that do exist, the influence of his pianistic style is palpable, often verging on the side of virtuosic, notably in Ad nos and the ever-admired Prelude and Fugue on B-A-C-H. Liszt also made a number of organ transcriptions of his own and other composers’ works, as well as writing a number of works for organ with a solo voice or instrument.

The Fantasie und Fuge über den Chorale ‘Ad nos, ad salutarem undam’ was composed in Weimar in 1850. The chorale itself was derived from the opera Le prophète by Giacomo Meyerbeer, to whom Liszt dedicated the work. The piece consists of three main sections: the opening fantasia, a central adagio and the closing fugue, which is preceded by a short almost cadenza-like interlude.

The memorable theme of the Meyerbeer’s chorale is the clear basis for much of the material found in the introspective section following the opening statement of the fantasia. A series of climactic sections, which serve as a free set of variations, follows before the quiet yet intense adagio development section. The quiet is broken with a louder transitional interlude into the fugue section, which acts as the recapitulation of the opening material, as well as a further section of development. The culmination of the work is approached over some time concluding with a valiant C major statement of the chorale.

Born in Ensisheim in Alsace in 1862, Léon Boëllmann lived until only a month after his thirty-fifth birthday in 1897. His relatively short career was spent as an organist and composer in Paris—the body of work from Boëllmann’s pen that remains suggests that his premature death was a particularly significant loss not just to French organ music but to French music as a whole. Following an education in Paris from 1871, where his teachers included Eugène Gigout, he served as organist at the church of St Vincent de Paul in Paris, firstly at the choir organ and then as the titular organist, where he remained until his early death.

The Suite Gothique is the most well-known of Boëllmann’s works. It is made up four movements: ‘Introduction—Chorale’, ‘Menuet Gothique’, ‘Prière à Notre-Dame’ and ‘Toccata’, the latter two of which are often performed as pieces in their own right. The short but imposing ‘Introduction’ states an original chorale theme, with each bold phrase being subject to an echo, a trait that is reversed in the sprightly and more extensive ‘Menuet Gothique’. The mood changes completely for the pious and lyrical ‘Prière à Notre-Dame’, which introduces an assuring sense of calm. The calm is irreparably interrupted by the moto perpetuo of the closing ‘Toccata’, which grows organically yet unremittingly towards a monumental climax and resolution.

Growing up as a Catholic, the organ was an instrument that Edward Elgar would have heard on a regular basis throughout his youth, before himself becoming assistant organist to his father at St George’s Catholic Church in Worcester. However, despite his abilities at the organ, Elgar wrote very little solo music specifically for the instrument, seeming to prefer the sound of the organ in a liturgical setting, as accompaniment to a choir, or within an orchestral setting. In fact, he wrote only two works for solo organ, the Vesper Voluntaries Op 14 and the Sonata No 1 in G major Op 28.

Elgar wrote his Sonata No 1 in G major for organ Op 28 in 1895 and it has since been widely accepted as a significant work in the British Romantic organ canon. The second of Elgar’s two organ sonatas started out life as the Severn Suite Op. 87, a test piece for the 1930 Crystal Palace Brass Band Festival. Two years later the fivemovement suite appeared in a version for orchestra by Elgar, first performed in April 1932 at an Abbey Road recording session. Also in 1932, Ivor Atkins—then organist of Worcester Cathedral and a close friend of Elgar—arranged, with the agreement of the composer, four movements of the Severn Suite as Elgar’s Sonata No 2 for organ, which received its first public performance at a recital of the Organ Music Society in 1933, following a private performance for the composer in Worcester Cathedral. The arrangement was subsequently published and allotted the separate opus number 87a.

The sonata is in three main movements—‘Introduction’, ‘Toccata’ and ‘Fugue’ with a concluding cadenza and coda added by Atkins. Much of the work is an extremely faithful representation of material from the original suite, and opens with a triumphal and memorable statement, the material of which recurs in Atkins’s ‘Coda’. The ‘Introduction’ grows gradually softer toward the ‘Toccata’, the most extensive and movement of the work. The breathless energy of the ‘Toccata’ slows and softens once more before moving seamlessly into the broad and steady ‘Fugue’. The whispered ‘Cadenza’ reintroduces the main theme from the opening, before the recapitulation and climactic finale of the ‘Coda’.

George Thalben-Ball was one of the most respected British organists of the twentieth-century. Born in Sydney, Australia in 1896, he returned to Britain with his English parents at the turn of century. An extremely distinguished career saw him as organist of the Temple Church in London for almost sixty years, as well as curator organist at the Royal Albert Hall and for thirty years as Birmingham City & University Organist. Upon his retirement in 1982 he was knighted, having earlier been awarded a CBE in 1967.

The Toccata Beorma was composed in recognition of an honorary doctorate that Thalben-Ball received from the University of Birmingham in 1972. The Poema was composed some years later with both pieces published together in 1980. Beorma is generally accepted as the founder of Birmingham, and the city’s name stems from that word, together with the Anglo-Saxon ‘-ingham’ ending. The thematic material of the Poema is derived from a musical code spelling the word ‘Beorma’; this is first heard in imitative entries beginning in the left hand following the hazy opening chord sequence on the organ’s strings. An unusual approach ensues throughout these two contrasting pieces, with harmony and chromatic movement somewhat untypical of the more conservative musical style found in Thalben-Ball’s other works—particularly his two elegies and the Paganini variations for pedals. The perpetual and repetitive patterns of the bristling Toccata are distinctly French in style, with further stretching of tonal boundaries, as the rhythmic momentum gathers pace above a slow-moving and persistent pedal part.