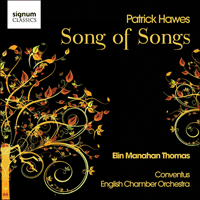 The composer Patrick Hawes has established a reputation as one of the most popular contemporary English composers working today.

This album of choral and organ works centres on the mystery and beauty of the words of the Old Testament, with stunning performances from Welsh soprano Elin Manahan Thomas and Patrick’s own choral group Conventus, as well as accompaniment from The English Chamber Orchestra.

'Taking the Old testament as his inspiration, Classic FM's former composer in residence has come up with a new choral disc of mystery and beauty' (Classic FM)

The collection of love poetry which forms the Old Testament’s Song of Songs has always presented a conundrum to scholars. The orthodox understanding of its presence in the Canon of Scripture was the widespread use in the Prophets of the concept of God as the husband of Israel. For the Christian mystical tradition, the dialogue between the lover and the beloved gave voice to the relationship of the soul to Christ. Bernard of Clairvaux preached over fifty sermons on them! Jesus called himself ‘the Bridegroom’ giving authority to this reading. Some have seen Mary the Mother of Jesus in the references to the ‘room where my mother conceived me.’ The relationship of romantic and erotic love to spirituality is the subject of these songs. They express desire, hope, confusion and joy; the whole range of emotions experienced by the lover—but there is no final consummation. The metaphors of vine, wine, garden and fountain are ones that prefigure the language of Christian spirituality. They provide Christian spirituality with a language of love that is both sensual and spiritual, of earth and of heaven. The text for these songs is faithful to the text of the Bible but poetic licence has provided a narrative structure and the development of some metaphors. The cry of the lover to the beloved, the heightening of the senses through sumptuous smells and tastes, and the imagery of fire and nature provide a rich basis for a certain type of music—music born out of our time, yes, but which also draws upon the timelessness of tonality, consonance and balance.

The ‘hymn to love’ in St Paul’s first letter to Corinth is one of scripture’s purple passages. It describes love by the qualities it expresses in relationships. It is, says Paul, one of the three things that last forever. The song Perfect love is not a paraphrase of the text, rather it is an interpretation of it. The setting was commissioned by the Chamber Choir of Bradford Grammar School.

David Hill commissioned the anthem When Israel was a child for Winchester Cathedral Choir in 1994. With a text adapted from Hosea Chapter XI, it is imbued with a sense of loving compassion and explores a wide colouristic range, not only within the vocal textures but also in the expansive organ accompaniment.

This setting of The Lord’s Prayer alternates between Latin and English. The Latin words are sung to the original plainsong, with the ensuing choral phrases growing out of the plainsong’s contours. Interaction between tenor soloist and choir further emphasises the juxtaposition of the two languages.

The anthem O Lord our governor had its premiere in St. Paul’s Cathedral in 2005. It was commissioned by the Worshipful Company of Butchers and uses words from Psalm VIII. The organ plays a prominent role with its extensive introduction and postlude. At times, the choir divides into two, providing antiphonal effects and an increasing sense of climax towards the end of the piece. The final C major cadential phrases in the organ prefigure the Toccata.

The castle and park of Grimsthorpe in Lincolnshire which inspired The Vauday Part Songs are the product of a millennium of English History. The park itself contains the pre-history of England in the remnant of Kesteven Forest. The four poems explore the themes of time and eternity, divine purpose in human history and the nature and meaning of memory. The Oaks opens up the scale of time taken in the creation of the Grimsthorpe landscape, describing one of the ancient ‘Kesteven’ Oaks; its free form allows for open-ended reflection. Stone, in the form of an Elizabethan Sonnet, tells the story of the key period in Grimsthorpe’s history, the dissolution of the Cistercian Abbey of Vauday, and the destruction of the Abbey by Charles Brandon to make a royal lodging. The Carriageway takes the listener on a journey through the park from the Little Bytham gates through the site of Vauday, past the lake and up to the castle. The poem is in the form of a lyrical ballad and reflects the romantic ideal of beauty at work in the design of the park. In Memoriam is the result of many hours of worship and prayer in the chapel, its free form echoing the mystical qualities of The Oaks. It touches the deep humanity at the heart of this place and community. The Vauday Part Songs were commissioned by the St Peter’s Singers who also performed the premiere at Grimsthorpe Castle in the summer of 2005.

The Toccata was written in 2008 for the organist Roger Sayer. It is dedicated to ‘the joyful remembrance of my father Jack’ and is inspired by the exuberance, humour and unflinching hope, faith and love of a great man.