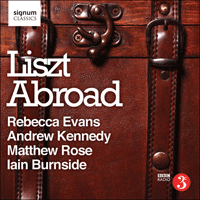 'The 20 songs recorded here cover a vast range of language and expression, from the extraordinary wildness and drama of ‘Gastibelza’ to the rapt stillness of ‘Über allen Gipfeln ist Ruh’. Burnside is a faultless guide along this journey, exhibiting power when required but never forcing either tone or pace; and his pianissimo playing reminds me of Gerald Moore’s—I can think of no greater compliment. The singing too is exemplary, with Rebecca Evans’s floated high notes things of exquisite beauty' (BBC Music Magazine)» More

'Liszt as polyglot is the theme of a superb album titled 'Liszt Abroad' by the multi talented pianist lain Burnside, with soprano Rebecca Evans, tenor Andrew Kennedy and bass Matthew Rose. Here are songs in German, French, Italian, Hungarian and even the sole setting of an English poem, Tennyson's Go not, happy day. These are wonderfully spirited performances: to listen to Evans's inspired Petrarch sonnets is to melt' (International Record Review)

I have latterly travelled through many new countries, have seen many different places, and visited many a spot hallowed by history and poetry; I have felt that the varied aspects of nature, and the different incidents associated with them, did not pass before my eyes like meaningless pictures, but that they evoked profound emotions within my soul…I have tried to give musical utterance to some of my strongest sensations, some of my liveliest impressions. (Franz Liszt, from Preface to Suisse, Années de Pèlerinage)

How could Liszt not write wonderful songs? Consider his credentials: one of the greatest pianists in history; champion and imaginative transcriber of songs by Schubert, Schumann and Chopin; conductor of operas by Mozart, Gluck, Beethoven, Donizetti, Verdi, Meyerbeer and Berlioz; oh, and of course, Wagner’s father-in-law. With voice and piano woven into the fabric of his life, Liszt’s songs were destined to be special.

As well as offering a personal selection of Liszt songs this recording has another agenda: to spotlight Liszt’s uniquely polyglot position in nineteenth century song. He composed songs in no less than six different languages: French, German, Italian, English, Russian and Hungarian. This Francophone Magyar embodied the Euro-citizen, travelling extraordinary distances as a young virtuoso in those années de pèlerinage, before putting down roots first in Paris, then Weimar and eventually Rome. All these cultures played a part in Liszt’s life. Russia represented an uncomfortable element in Weimar through tortured, tangled negotiations over the eastern estates of his lover, the Princess Sayn-Wittgenstein; while Britain had a walk-on cameo role through the Princess’s former governess and treasured family retainer, Janet ‘Scotchy’ Anderson. One more European flavour enhances this disc. While Liszt does not set the Spanish language, the Gothic horror that is Gastibelza takes us to Spain. The only piece I can think of that is simultaneously Mad Song and Bolero, Gastibelza abounds in flamboyant local colour, complemented by the bracing Spanish guitars of Comment, disaient-ils.

Liszt’s Euro-citizenship had a flipside. Nowhere was he a musical native. He stood outside the worlds both of French mélodie and German Lieder. His freshness and originality, the very qualities we now find so appealing in both spheres, were not embraced with enthusiasm by his contemporaries. German critics, Robert and Clara Schumann among them, took particular issue with the lack of unity in his Lieder, singling out an unhealthy tendency to develop, rather than stick to a single mood. Ironically one could wish for no better summary of why Liszt’s Heine settings move forward from Schumann’s. As so often in Liszt’s career, he was not thanked for blazing a trail.

The music on this disc spans over four decades. The earliest songs are among the most remarkable. Liszt was only in his twenties when he chose three sonnets by Petrarch, propelled by their poetic complexity into a new musical language, a cross-pollination of Italianate operatic vocal writing and virtuoso pianism. Liszt here moves beyond the confines of the salon, demanding from each performer a more heightened level of projection, a bigger range and sound palette, than any song composer had demanded before. And yet the end of the third sonnet leaves us con intimo sentimento, with singer and pianist barely whispering.

Most of our music was written in the following decade. The 1840s saw the Victor Hugo songs, inspired by Marie d’Agoult, and most of the Heinrich Heine settings, hot on Schumann’s heels. With the passing of time Liszt’s music becomes more ascetic; his textures sparer; his vocal writing narrower in range. At the same time, his harmony becomes more daring. The bleak, visionary fragment Und wir dachten an die Toten belongs in the twentieth century; as in a quite different way does the cheeky major ninth arpeggio, offbeat and unresolved, that greets the morning sun in Wie singt die Lerche schön.

Despite the decades and the vast stylistic chasm between them, early and late songs share certain characteristics. Liszt the orchestral conductor knew the power of recitative. In almost every song here the main action stops, for voice and piano to break off into a different mode of conversation. At the end of Im Rhein the camera pans away from the river, moving into close-up on the singer, absorbed in thoughts of his lover. The song is indeed not unified—that is entirely the point. It is imaginative. This recitative effect finds its apotheosis in Die Lorelei. Liszt is masterly in setting up his time frame for Heine’s story, again prematurely cinematic in invoking both present and past. After Heine’s boat has hit the rocks in full chromatic splendour, it takes a single phrase from the singer, one rolled secco piano chord, to turn back the years.

Lorelei shows another of Liszt’s favourite gestures: repetitions of his own devising. ’Und das hat mit ihrem Singen/Die Lorelei getan’, the song ends. ’And that’s what, with her singing/Was done by Lorelei’. Liszt breaks into eight phrases what he could easily have set in one, shifting in the process the song’s emphasis. ’She did it. She did it with her singing. With her singing!’ So Heine’s cautionary tale of threatening female sexuality becomes Liszt’s parable on the power of music. His one and only English song, Tennyson’s Go not, happy day moves in the opposite direction. Three times over, with music endlessly teased out, we hear that a rose is her mouth. Liszt uses heavily sexual silences, refusing to cadence, to resolve, to settle. Did Tennyson have any idea of the erotic potential in his last line? Let us hope Liszt never played this song for ‘Scotchy’ Anderson.

I have chosen to end our CD not with the latest song chronologically—Und wir dachten an der Toten claims that honour—but with the most Wagnerian. There must be a way of superimposing onto Über allen Gipfeln ist Ruh the Prelude to Wagner’s Parsifal. Liszt’s opening sequence of sublime common chords has always evoked to me the Quest for the Grail. Yet the dates are totally wrong: Liszt wrote his song in 1848, nearly thirty years before Wagner put pen to manuscript paper. Just as the lives of these two great men were entangled, for richer or poorer, in musical sickness and musical health, so too was their music. And while father-in-law was always generous in acknowledging his debt to son-in-law, the converse was not always true. Perhaps this final track can shed its own gentle light on that most intriguing musical connection.