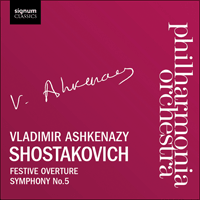 The position of Shostakovich’s Symphony No 5 as one of the twentieth century’s most popular and successful symphonic works is beyond any doubt—its triumph was immediate and greeted Shostakovich’s rehabilitation as a truly great Soviet artist.

'The excellent performances on this recording can be enjoyed without any need to rank them among the numerous other fine issues available … anyone encountering the Fifth for the first time in this performance will doubtless be overwhelmingly impressed' (AllMusic, USA)» More

Nobody in the Soviet Union was immune to Stalin’s Great Purge in the years immediately preceding the Second World War. Neither the poorest citizen-comrade nor the highest ranking party officials could escape Stalin’s clunking fist as he sought to consolidate power by ‘cleansing’ the Communist Party, and the country at large, of so-called dissidents, undesirable anti-revolutionaries and other ‘enemies of the people’. Ethnic minorities were deported, peasants and professionals and party apparatchiks too far to the left or too far to the right were imprisoned and killed on the flimsiest of evidence or the cruel expedient of the forced confession. Many hundreds of thousands were killed and millions more consigned to labour camps. The arts were under intense scrutiny for any perceived modernism and a good many writers, artists and composers paid dearly in the process. One of the major buzzwords of the time was ‘formalism’, which was essentially a charge against a work that was not considered to appeal directly to the masses. On this matter, Shostakovich was adjudged to have failed his country and comrades by producing works lacking in Socialist Realism—a serious breach of the party line.

As a 27-year-old, in 1934, Shostakovich had a runaway, worldwide success with his opera, Lady Macbeth of the Mtsensk District, which was regarded as a high-water mark in Soviet opera and was praised by the authorities as, ‘the result of the general success of socialist construction’. In 1936, with the arts now under centralized control under the All-Union Committee on Artistic Affairs, the tide was turning against any composers with ‘formalist’ tendencies. Stalin attended a performance of Lady Macbeth in January of that year and was offended by the forthrightness of the subject matter and Shostakovich’s advanced musical language. Two days later, the now notorious Pravda editorial appeared describing Lady Macbeth under the headline ‘Muddle instead of Music’ as a ‘discordant, confused stream of sounds … the music cracks, grunts and growls’. A few days later, his ballet, The Limpid Stream, which was in the repertory of the Bolshoi Ballet at the time, fared no better under the banner, ‘Balletic Falsehood’. Although now seen as preposterous and philistine, at the time these were unprecedented articles. Pravda, the official organ of Soviet Communism, disapproved in language verging upon the violent; the ‘cheap clowning’ of Lady Macbeth being chillingly described as ‘a game of clever ingenuity that may end very badly.’ The party had spoken—this music was not to be imitated and the works in question disappeared from the repertory forthwith.

Although the ramifications of the editorials were not immediately clear, the aftershocks rippled rapidly through Soviet culture. With Stalin gearing up for the first of the infamous Moscow show trials later in the year, and the Great Purge hot on their heels, everyone had to watch their step. Shostakovich had been working on his colossal, modernist Fourth Symphony for some time, but it no longer suited the mood of the times and he was forced to withdraw it during rehearsals, in December 1936. Neither the Fourth Symphony nor Lady Macbeth would be heard again for some 25 years. The golden boy of Soviet music had become a degenerate corrupter.

Just seven months after the mothballing of the Fourth Symphony, Shostakovich introduced his Fifth as the ‘creative reply of a Soviet artist to justified criticism’—a shocking, awkward phrase which turns sour in the mouths of many commentators. These were dangerous, suspicion-soaked times in which friends and protectors of the composer were arrested and even summarily tried and executed. The composer’s own description of the symphony displays a similar awkwardness:

The theme of my Fifth Symphony is the making of a man. I saw man with all his experiences in the centre of the composition, which is lyrical in form from beginning to end. In the finale, the tragically tense impulses of the earlier movements are resolved in optimism and joy of living.

Few works have created such disagreement among writers and critics as this offspring of a marriage between music and politics. It has spawned a plethora of interpretations of the composer’s intentions and given rise to disparate warring factions among musicologists. Was Shostakovich deliberately cocking an encoded snook at his critics? Was he privately lampooning the Communist Party? Was the work a conscious decision to re-align with the symphonic mainstream? Did Shostakovich intentionally adopt the role of a holy fool in his engagement with the Soviet authorities? Is there a ‘menace-theme’ in the symphony that spells out, musically, in two notes, ‘Sta – lin’? Revisionist and counter-revisionist theories abound and will doubtless continue as more information from this dark time comes to light. One thing is for certain: whether the symphony represents Shostakovich cow-towing to totalitarianism or not, its position as one of the 20th Century’s most popular and successful symphonic works is beyond any doubt.

The public première of the work, on 21 November 1937, was naturally an extraordinarily tense occasion for the composer and his audience. His influence, commissions and, hence, income had all declined rapidly during the previous 18 months and many assumed his career depended on a successful outcome. The young, then unknown, Evgeny Mravinsky conducted the Leningrad Philharmonic in the Symphony No 5 in D minor Op 47 and brought the house down. The triumph was immediate and the applause tumultuously greeted Shostakovich’s rehabilitation as a truly great Soviet artist. Even the critics were eventually effusive in their praise, affirming that the young composer was coming back into the party fold: ‘A work of such philosophical depth and emotional force could only be created here in the USSR’. Following the excitement occasioned by works such as the First Symphony and Lady Macbeth, composers abroad were rather muted in their praise for the work. In the climate of thrusting, modernist Western Europe of the time, the symphony seemed a step backwards to some, although audiences soon embraced the work wholeheartedly. More importantly, in the USSR, it had saved Shostakovich’s career, at very least, and for the present, the golden boy was shining once again.

After a second period of fresh charges of ‘formalism’ in 1948, Shostakovich was again cast into the wilderness until a relaxation of the artistic manacles followed the death of Stalin in 1953. By late 1954, Shostakovich’s yo-yoing career was back in the ascendant after being awarded the title of People’s Artist of the USSR and elected an honorary member of the Swedish Royal Academy of Music. The Festive Overture Op 96 was written during these less harrowing days and reflects a lighter side of Shostakovich’s musical personality. The overture was written in record breaking time in response to a last-minute request from the Bolshoi Theatre which required a celebratory piece for the 37th Anniversary of the 1917 October Revolution. Dashed off in just three days, and seemingly based on Glinka’s Ruslan and Ludmilla Overture, this is a little rip-roaring, fire-cracker which barely draws a breath from beginning to end. Its utterly upbeat nature and lack of any solemn ideological baggage has assured that a work written to commemorate the Bolshevik Revolution now enjoys outings at fireworks spectaculars the world over.