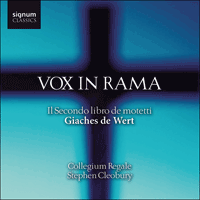 The Flemish-born Giaches de Wert was one of many foreigners to dominate the Italian music scene in the mid to late sixteenth century, therefore to this day his music is largely unknown to many. It is the second of three books of Motets which appears on this disc, written when his skill as a madrigalist had reached its height.

As part of the Kings College Choir, the choral scholars of Collegium Regale perform independently of the choir, singing a repertoire that encompasses fifteenth Century sacred music, jazz, folksongs and pop. Directed by Kings College’s and the BBC Singer’s renowned director Stephen Cleobury.

Despite increasing research, particularly in recent years, into the life and works of Giaches de Wert (1535-96, pronounced Geeack de Vehut), much of his music is still largely unknown to many. The Flemish-born composer was one of the multitude of foreigners who almost entirely dominated the Italian musical scene in the mid- to late-sixteenth century. Due to his significance in Italy, especially in the north where he worked for most of his life, as well as in his homeland, his music had a marked influence not only on his contemporaries but also on future generations, particularly through his famous understudy, Monteverdi.

As with many musicians during the sixteenth-century, Wert’s origins are vague at best. Born in 1535, he was brought over as a boy to Naples, but by whom and in what context is still unknown. One intriguing possibility is that Ferrante Gonzaga brought Wert to Italy at roughly the same time as he did Lassus and Rore, both of whom were as significant to the development of the madrigal as Wert. By 1551 the young musician had established contact with Novellara, a small court in northern Italy that formed the basis for his crucial early musical training; whilst there he released his first four books of madrigals, which already demonstrated his distinct use of rhythm. In 1565 he was appointed as maestro di cappella in Mantua, a far larger court that played an active role in the vibrant musical scene of northern Italy; here he came into contact with the chief musicians of the day and, more importantly, had to compose regularly for his patron, Duke Guglielmo Gonzaga, who was responsible for maintaining Mantua’s strong musical tradition.

At Mantua Wert’s prolific madrigal composition continued, and he produced a further eight books before his death in 1596. Undoubtedly these were his most influential output, striking an individual stylistic path of gravitas whilst his contemporaries tended to write in the fashionable lighter style. It was through this genre that he heavily influenced Monteverdi, who worked under him at Mantua from 1589-96, and thus created his most significant legacy. As maestro di capella, however, he was also expected to fulfil a liturgical role, even if secular music played a greater part in daily life at this particular court. Aside from the two masses and the handful of other liturgical works which survive, Wert produced three books of motets, relatively modest for a composer during that time, the first two for five voices and the third one for six. It is the second book, Il Secondo libro de motetti a cinque voci, first published in 1581, which appears on this disc, written when his skill as a madrigalist had reached its height; over the course of thirteen motets Wert displays his proficiency in writing sacred music, whilst further forging a truly individual stylistic path.

Conventionally, the stylistic qualities of liturgical music were more restrained than those of secular counterparts, which were themselves inspired by often sensuous secular poetry. There were exceptions of course, typically with settings of particularly penitential liturgical texts (such as those during Holy Week), but on the whole Wert’s motets are more restrained, both harmonically and texturally, than his often exotic madrigals. Many of the motets in Il secondo libro are fairly extensive; this is because Wert commonly takes a small section of text, treats it to one or two points of imitation, and extends this over a large passage of music. When a new point of imitation is introduced with the next section of text, it is done so subtly and gradually in one or two of the voices, whilst the others continue with the preceding material. The result of this approach, in the longer motets at least, is a sustained overarching structure, only really broken by the division of the pieces into two parts; in some of the best examples, such as Obsecro vos fratres, Hoc est praeceptum meum and Amen, amen dico vobis, the effect is a perpetual sense of drive and direction whilst at the same time providing few structural points to hold on to as a listener. This is enhanced by the harmonic stability of the imitative motifs themselves, which in extreme examples can contain just two or three pitches; in the very opening of Hora est iam nos (representing the reference to sleep), Wert uses five consecutive repetitions of the same pitch, and the opening of Hoc enim sentite in vobis is similarly static. The shorter motets in the collection, such as O crux ave spes unica, Benedicta sit sancta Trinitas and the vibrant Gaudete in Domino, each contain more direct points of interest and are a welcome contrast to the extended structures of the longer pieces in the set.

Yet, despite the stylistic simplicity of many of the motets, the music is nonetheless influenced by more exuberant aspects of his madrigals. By the time Wert was writing these motets, in the years preceding 1581, he had entered his full maturity as a madrigalist, and parallel techniques are abundant. One stylistic trait almost unique to madrigals, and absent from most sacred music during this period, was the use of fast-moving virtuosic passages, which can be found in various places in these motets. Gaudete in Domino, one of the shorter motets in the set, represents the command “Rejoice in the Lord” not solely with its lively mood, but particularly through the rapid passage which ends the piece. Indeed, the word “joy” is almost always portrayed by this virtuosic style throughout the set, and examples can be found in both halves of Amen, amen dico vobis. On the other hand, the second half of Hoc enim sentite in vobis uses this virtuosic style to provide contrast with the preceding text: God, having humbled himself, “hath highly exalted him”, painted by the sudden introduction of rapidly rising scales which sets the tone for the rest of the piece. The subtle and sustained quality of much of the surrounding music only heightens the effect that these virtuosic passages have on the motets as a whole.

This use of word-painting is another technique which was extremely common to madrigal writing and, whilst naturally more understated in his motets, examples can be found in almost every piece. The restrained opening to Hora est iam nos mentioned above is, immediately afterwards, contrasted with a rising scale to represent surgere (“to awake” out of sleep). In the second half of this piece, ambulemus (“let us walk”) is painted with constant ascending and descending scales which are shared between all the voices in what is probably one of the most extended settings of one section of text in the entire set. Descending scales are used in turn towards the beginning of Domine, tu es qui fecisti to paint the word mare (“sea”), whilst the energetic setting of Surge velociter (“Arise quickly”) at the end of Angelus Domini astitit immediately drives through the texture. In Providebam Dominum, Wert relies on a more typical technique to represent joy and rejoicing: the passage “Therefore did my heart rejoice, and my tongue was glad” moves into a spirited triple time rather than employing the fast virtuosic passages mentioned above, although these do make an appearance at the end of the piece for “thou shalt make me full of joy”, in a section almost entirely lifted out of several of his madrigals, and again unconventionally placed within the sacred genre.

Amidst the varied proficiency displayed throughout these motets, however, the highlight of the set is undoubtedly Vox in Rama. The text of this motet, taken from the Book of Jeremiah and quoted in St Matthew’s Gospel, concerns the desolation of a mother over the loss of her children. Given its particularly evocative nature, it is perhaps unsurprising that Wert employs many techniques typically reserved for his more sensuous madrigals, from extreme tessitura and wide leaps to extended chromatic movement. The stark opening motif, consisting of a low tessitura in each voice followed by a rising octave leap, sets the tone for the music to follow. Word-painting is also more frequently employed, from the alternating thirds representing the ululatus (“weeping”), to the lamenting motifs so reminiscent of those used in his madrigals set to the humanist texts of Petrarch. This is most evident in the twin-motifs used for Rachel plorans (“Rachel weeping”), which Wert weaves in and out seamlessly to create wrenching chromatic shifts. Perhaps the most impressive aspect of this motet, however, is the way in which the tension gradually accumulates through a series of increasing climaxes, culminating only at the very end of the piece. It is a fitting end to a set in which Wert successfully adapts his foremost stylistic qualities, employed so effectively in his madrigals, to the sacred genre.