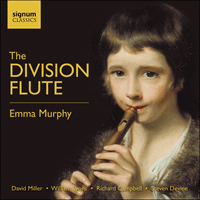 Emma Murphy’s love of the recorder has inspired her to record the fascinating First Part of the Division Flute, described in 1705 by its publisher as 'delightful to all lovers of that instrument’, which contains some of the best known recorder music, as well as some of the most neglected. The collection has never been recorded complete before and the result is a fantastic album featuring musicians at the forefront of early music today.

'Some of the variations are very virtuosic, and this gives some indication of the technical skills of the recorder players in England around 1700' (MusicWeb International)» More
'Murphy's tonally secure and engaging recorder playing is the most attractive feature of the entire disc, which offers a useful look into the musical world of the gentlemen amateurs of England in the late seventeenth century' (AllMusic, USA)» More

In early November 1705 the London music publisher John Walsh issued a collection entitled The First Part of the Division Flute, Containing a Collection of Divisions upon Several Excellent Grounds for the Flute; he recommended it to prospective purchasers by describing it as ‘Very Improveing and Delightfull to all Lovers of that INSTRUMENT’. The instrument was not the transverse flute, which was hardly known in England at the time, but the Baroque treble recorder, which had been introduced into England from France in the 1670s and had become a favourite among amateurs in the late seventeenth century. The collection made available to recorder players a genre that had long been in the repertory of other instruments. The immediate model was the series of publications entitled The Division Violin, first published by John Playford in 1684 and continued by his son Henry in the 1690s. Indeed, The First Part of the Division Flute consists entirely of pieces that first appeared in one or more of the editions of The Division Violin. They are mostly transposed upwards to cope with the fact that the treble recorder, with f’ as the bottom note, has a much more restricted range than the violin. It was only with The Second Part of the Division Flute, published by Walsh as a sequel in October 1708, that we begin to find pieces that seem to have been written specially for the recorder.

The English repertories of divisions on a ground belong to a tradition that goes back to the Italian Renaissance. In the fifteenth and early sixteenth centuries a practice developed in Humanist circles of improvising songs to the accompaniment of the lira da braccio, a viola-sized bowed instrument set up for playing chords. These songs seem to have been improvised using simple chord sequences, much as standard repeated harmonies are used today in the twelve-bar blues. Not surprisingly, chord sequences also began to be used as the basis of dance music and sets of instrumental variations. Some of them, such as the Passamezzo antico (a simple-two section pattern in the minor), the Passamezzo moderno (its major-mode equivalent), the Romanesca (the kernel of the later La Folia ground) and the Bergamasca (the ‘three-chord trick’ in the major), were imported into sixteenth-century England, where they were used for popular songs and ballads and also formed the basis of highly sophisticated sets of variations for lute and keyboard. In the seventeenth century two new ground basses arrived from Italy: the Passacaglia (four notes in the minor descending by step from tonic to dominant) and the Ciacona or chaconne (a simple cadential progression in the major).

As already mentioned, these six ground basses lie behind a good deal of English popular music. For instance, ‘Greensleeves’ (DF, i. 6) is not an original melody but is merely a descant of the Romanesca ground. The original duple-time tune was used for the ballad of ‘Lady Greensleeves’, first published in 1580 (hence the title); the familiar compound-time version seems to have been developed in the middle of the seventeenth century as a country dance tune. Incidentally, the Romanesca did not appear in England until the mid sixteenth century, which makes it unlikely that ‘Greensleeves’ was written by Henry VIII (1491-1547), as is often claimed. ‘Paul’s Steeple’ (DF, i. 2) is based on a combination of the Passacaglia and the Romanesca and also seems to have a title derived from a broadside ballad. The text has not survived, but it probably concerned the destruction by lightning in 1561 of the steeple of old St Paul’s Cathedral. Its alternative title, ‘I am the Duke of Norfolk’, refers to a second lost ballad, first recorded in 1639. ‘Faronell’s Ground’ (DF, i. 3) is a related piece, based on the Spanish chord sequence La Folia, which was developed from the Romanesca. It was made famous by Corelli in the variations at the end of his op. 5 violin sonatas, published in 1700, though the variations in The Division Flute are not related and seem to be by the French violinist Michel Farinel, who visited England in the 1670s. A fourth related piece, ‘Bellamira’ (DF, i. 8), is based on an elaboration of the Passamezzo Antico. In The Division Violin it is ascribed to Solomon Eccles, a popular London theatre composer in the 1680s. The title, found only in Sir John Hawkins’s History of Music (1776), is unexplained, though it too is probably the name of a ballad.

Another group of pieces is based on simple major-mode cadential formulas. ‘Reading’s Ground’ (DF, i. 1) is essentially a version of the chaconne chord sequence, printed in The Division Violin and The Division Flute in a simple form. However, the original violin piece, found in a collection of scordatura pieces now in Oxford, has a continuously varied bass, which we have used here to make sense of the harmony. The composer was probably the Valentine Reading who was recorded as a royal violinist in 1686. Several of the more rustic pieces in The Division Flute are based on simple three-chord harmonies, related to the Bergamasca. The ‘Division on a Ground’ (DF, ii. 3) is a piece of this sort, though again it seems necessary to vary the bass to make the harmony work. Its style suggests that it is by Solomon Eccles. ‘Old Simon the King’ (DF, i. 4) and ‘Johney Cock thy Beaver’ (DF, i. 7) are based on essentially the same chord sequence. ‘Old Simon the King’ seems to be named after a lost sixteenth-century ballad and was very popular during the Restoration period. When the rollicking tune of ‘Johney Cock thy Beaver’ was first published, in Thomas D’Urfey’s Choice New Songs of 1684, it was said to be ‘an excellent Scotch Tune’. It is found in eighteenth-century Scottish sources and is still current in the Northumbrian bagpipe repertory. ‘Tollet’s Ground’ (DF, i. 5) is in a similar idiom, with many Scotch snaps, and uses almost the same ground. It was probably composed by Thomas Tollett, an Irish musician who worked in the London theatres in the 1690s.

The Division Flute also contains some sophisticated pieces based on more complex grounds. The ‘Division on a Ground’ (DF, i. 9) seems to come from the incidental music John Eccles wrote for Thomas Southerne’s play Sir Anthony Love, first produced in 1690. Its style, with a long modulating bass similar to those used in a number of grounds by Henry Purcell, suggests that it is actually a skeleton version of a piece for four-part strings. Three pieces (DF, i. 10; DF, ii. 1 and 5) are by Gottfried Finger, a Moravian viola da gamba player who came to England in the 1680s. All three of them were probably written for the recorder rather than the violin, and may have been first performed in the public concerts Finger promoted in London in the 1690s; his partner in the venture was the younger John Banister, a celebrated recorder player. The other piece in the collection that seems to have been an original recorder piece is ‘An Italian Ground’ (DF, ii. 6). It was first published in The Delightful Companion (1686), and a keyboard arrangement of it is ascribed to Giovanni Battista Draghi, an Italian organist who settled in London in the 1660s. It shows how a resourceful composer could turn the simple genre of divisions on a ground into something rich and eloquent.